The Penguin Got Its Wings

I was cleaning out my office today and decided to give the penguin wings. Sometimes it's best not to overthink stuff. And sometimes finishing something like this little project lifts an intangible weight off your brain and reminds you it's OK to put something on hold until you're in the right place. 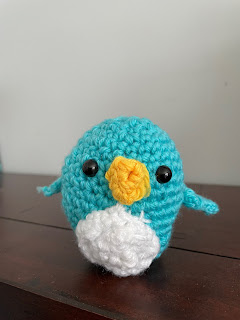 Posted by Elizabeth Pagel-Hogan at 12:03 PM No comments:

For today's post, I'm inviting you to check out this gift guide I shared on my writer's website: 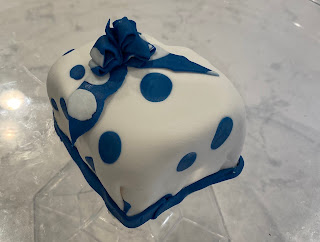 Posted by Elizabeth Pagel-Hogan at 11:49 AM No comments:

I'm having a great time birding in 2021. I've completed an eBird.org checklist every day this year. I've seen 54 species!

I wanted to celebrate my 50th species for the year - it was a sharp-shinned hawk - but I wasn't able to snap a photo.

My 51st was a grackle, no photo either.

Sorry. It's hard to get photos sometimes!

The same day I saw the raven, I saw canvasback ducks and greater scaups, two different kinds of diving duck. 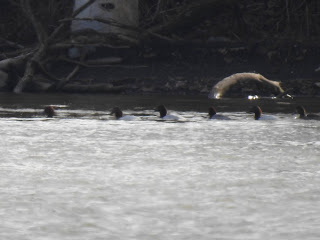 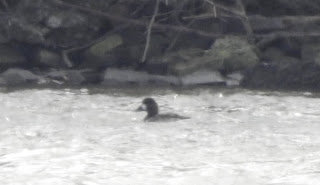 Now, to celebrate the wonderful birds I've seen, I'm adding two more bird photos. One is of a bird people love: a bald eagle. The other is a bird people hate: the European starling. 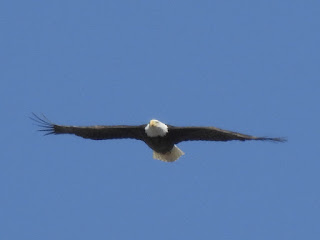 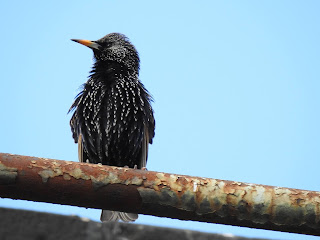 I know why people don't love starlings. They are an invasive species and very aggressive. But they have the most interesting songs, and iridescent feathers. It's hard for me to not like any bird. It's not their fault they are here. They are just doing what they do.
Bald eagles are so epically big. They are awesome to photograph.

Posted by Elizabeth Pagel-Hogan at 3:51 PM No comments:

I had fun doing this paint by number project in January. Parts were frustrating - like sections that were too small for any of my paintbrushes. But it wasn't as stressful as the crochet project because I could listen to webinars or podcasts while I painted. Here's the progression of my paint by number!

Posted by Elizabeth Pagel-Hogan at 10:03 AM No comments:

I gave blood for the first time last week. A friend urged me to and something clicked - it was time. Turns out I'm O+, a very useful blood type. I found out my mom has donated over a gallon of blood! I'm inspired by her and eager to follow her example. It felt good to know I was helping people, but I'm not going to lie - someone bringing me snacks and drinks while I chilled in a quiet room was pretty nice also. 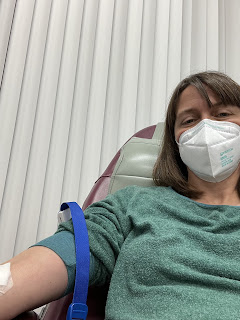 Posted by Elizabeth Pagel-Hogan at 1:58 PM No comments: 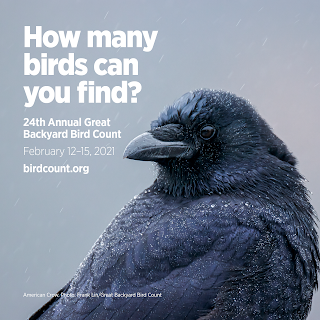 I wrote an article about the Great Backyard Bird Count back in 2019. I'm so excited to participate in 2021, my 3rd year. Are you ready to join me this year? Let's get counting!

Posted by Elizabeth Pagel-Hogan at 6:03 PM No comments:

When Will the Penguin Get Its Wings?

I love doing crafts but I'm actually really bad at most of them. That's because I'm impulsive and impatient and not particularly good at taking the time to re-do things when I do them wrong. I just keep going and don't worry about if things are perfect. I don't like to go slow. I just want to DO the things.

I really wanted one of these little amigurumi crochet animal kits from The Woobles. Honestly they are so cute. And so small. I thought it would be a good first project. I put it on my Christmas list and on Christmas morning it was there under the tree.

I started the project that day!!

But it was hard, actually. And I made some mistakes. And I realized I couldn't rush through this. So I stopped, undid my few stitches and waited. 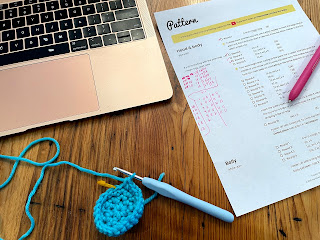 I thought it would be good for me to try a new way of doing crafts. I'd practice being patient and fixing mistakes instead of just making an imperfect final project.
I made some progress. I watched videos. I counted stitches. I restarted. I started getting some pains in my hands so I adjusted my grip. I counted stitches and kept track of my progress. I restarted. It got very hard. 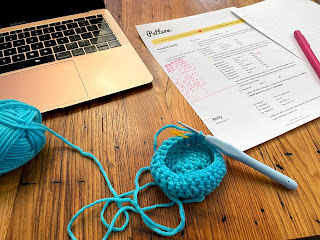 As I made my way to the end of the project, I realized I was not near the end. I would have to do a stomach and beak, too. Yikes. I actually felt real anger at this point. Anger at myself. Why was this so hard? Why did I make so many mistakes? How do people actually stand to do crochet? It required so much intense counting I couldn't believe people did these projects for relaxation. My shoulders were cramped. I was breathing weird.
I was angry at the penguin, too. 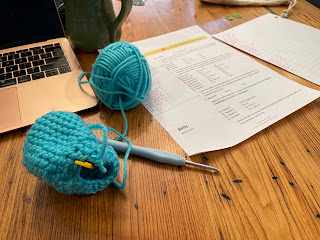 I probably should have stopped and taken a break because honestly I wasn't having fun at this point. No fun at all. This craft wasn't satisfying and creative. It was a torment. I'll just stop, I told myself.
But there was a deep part of me that worried if I stopped, I wouldn't finish it. Ever. Because I wasn't having fun. My hand hurt. I was frustrated at how many times I messed up. If I stopped when I wasn't having fun, why would I ever pick it up again?
I kept going. I finished a version of the stomach and a version of the beak.
Then I read the rest of the pattern and realized I was supposed to make wings, too. Sigh. I did not do the wings. 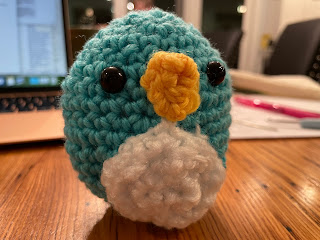 The penguin currently sits wingless on my desk. It is cute. It is darn cute. But it is also a little terrifying. I'm scared of how this penguin made me feel about myself. I was really, really hard on myself. I was judging myself for how unhappy I was about a craft. This was a sobering, strange experience.

I don't know when I'll have the gumption to go back and finish the wings. There's a gamble here. If I wait too long I'll forget the skills I acquired to make this project. If I go back too soon I might be just as frustrated.

What if I didn't do the wings? Would that be so bad?

But every time I sit at my desk, I see the unfinished project. I know it's not done.

And the penguin is there. It's shiny plastic eyes beg for wings.

Posted by Elizabeth Pagel-Hogan at 11:11 AM No comments: