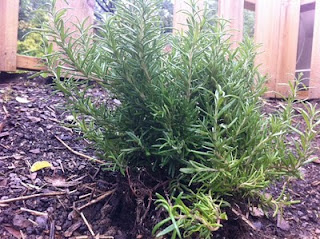 When I was a teenager, I tended a really lovely herb garden. It was truly relaxing and I loved when they were all in bloom and fragrant. Now that we are settling into our home, we've been here over a year, I'm ready to turn some terraces in our landscaping into a bountiful and aromatic herb garden.

The first entrant into the field is Rosemary (Rosemarinus officials). I picked up this substantial bush at Giant Eagle for a super low price.

As a writer and reader, I was even more thrilled to have a substantial little information card attached to the plant. I now love The Pinery for providing this info with their plants! 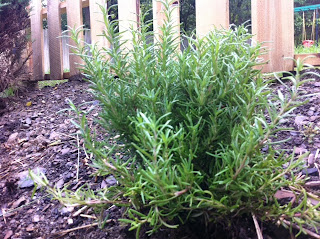 According to the card, Rosemary is a fragrant shrub. The needle leaves are green and gray and the blooms are lavender blue.

Rosemary's medicinal purposes utilize the essential oil that is steam-distilled from the leaves and used for overworked muscles, arthritis, rheumatism and poor circulation. It is also claimed to restore mental clarity and known as the "herb of remembrance." Rosemary has such a pungent odor and scent is so tightly interwoven with memory, I was not surprised to read this! I didn't know that in Latin, rosemary is known as "Sea Dew" because it was found growing so abundantly near the Mediterranean Sea. It was used frequently by Romans and Greeks as a bath oil.

What I am most familiar with is using rosemary in cooking. It is a member of the mint family, and is used in both French and Italian cuisine, especially to flavor chicken, lamb and fish, but traditionally not red meat. It also goes well with late summer harvest plants like potatoes, squash, and tomatoes. Of course, we're all familiar with rosemary in breads.

Posted by Elizabeth Pagel-Hogan at 2:00 PM