Do You Know the Secret to Successful Parenting?

Tantrums are the real trenches for parents. Everyone's confused and scared. It's loud, there are lots of bodily fluids and a pretty high likelihood of being attacked. Tantrums are when my parenting skills are pushed to their limits.

Today, NPR published a really relevant piece on how parents can help their children manage tantrums better by doing nothing. Tantrums are firestorms of anger and sadness and when parents try to tease their kid out of their tantrum or ask too many logical questions it prolongs the tantrum. Everyone feels bad for a longer period of time. The quickest way to end a tantrum is to do nothing, let the child reach the peak of anger and then they can move to sadness which makes them more receptive to comfort.

My preferred method is to ward off tantrums through classic techniques like distraction, logical persuasion and even rewarding (aka bribing) the child to perform my desired action or behavior. It sounds so scientific doesn't it? But it doesn't always work.

I recently enrolled all three of my boys in gymnastics classes. The toddler and the school-ager love their classes and jump right in and participate.

But my preschooler, D., is different. He says he loves gymnastics. He cheers as we're driving there. And once he even told me he wished his teacher, Miss Laurie, was his mother.

But when we get into the class, he sits there.

He won't do the warm-ups. He won't do the stretches. When he's called on to demonstrate a station, he refuses. When the class begins, he mostly leans on the wall, watching the other children prance and balance and tumble and swing.

This happens pretty frequently, and I get so frustrated! I fixate on the money spent per class for my kid to pick at the fuzz on the bright yellow star-shaped carpet and watch other kids flip and bounce. I know what he does at home and want desperately for him to show off his skills here! I suggest he try activities, and he refuses. I point out what fun the others are having and he head-butts my leg. I nudge him gently toward the parallel bars and he collapses on the floor again.

Several weeks ago, when we were in a similar situation, I ramped up my anger, frustration and demands. I issued ultimatums for him to join in and threatened to take away privileges. We left the class, both of us crying, all thanks to my terrible attempts to get him to jump around the room like the other kids (and not waste my money!)

So when I found us in the same boat at last week's class, somehow the concept of effort-allocation, which I had recently read about in Guns, Germs and Steel, popped into my head. From earliest time, humans concentrated their efforts on activities that had the most pay-off and avoided activities with no pay-off. My attempts to convince D. to join in had no pay-off and my frustration levels were rapidly escalating, so I told a mommy lie, said I had to call Daddy really quickly and tell him something, and that I would be right back - and I left the room. (Background: I wasn't supposed to be in the room anyway but D. had a death grip on me.)

I decided it was time for me to do nothing.

I let him sit on the floor, watching the other kids. I sat in the parent's lounge, doing nothing. At first I worried I was giving up but then I tried to see the benefits. Was there a payoff for me? It turns out the payoff was huge - mental downtime.

The payoff for him? I didn't know if there would be any, except that I promised myself not to be angry on the way home. I let it all go.


And when his class emerged, the teacher said by the second half, he "really got into it." D. came out cheerful, cheeks flushed, skipping. He hugged me, I hugged him back. 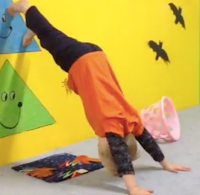 Posted by Elizabeth Pagel-Hogan at 10:37 PM

Email ThisBlogThis!Share to TwitterShare to FacebookShare to Pinterest
Labels: Being Boys, Middle Kid