Who loves my son more? 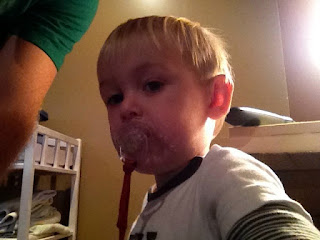 My 4 year old might love my toddler more than I do.

My toddler has a bad cold right now and has been sleeping poorly. To get him and our 4 year old out the door today, I allowed him to have the pacifier in a way we never do. We got to gymnastics, he was happy to give it up to run around the room, and I hid it in my purse.

We headed back to the van, I buckled in the toddler and asked my 4 year old to buckle up. I turned around to check behind me before I backed up and noticed that somehow the toddler had his pacifier again.

"Did you give him the pacifier?" I asked the four year old.

"Yep," he replied, cheerful and bright.

"Why did you do that?"(years ago a co-worker told me never to ask young children why they do things.)

"It makes him happy," said my 4 year old, loving brother, empathetic, and unabashed. His pure, simple explanation of unconditional love. He dug through my purse to find something that he knows his brother loves. Part of me knows he was also motivated by doing something off-limits, but more out of love.

And in that moment, mommy guilt swept over me and my brain was flooded with all the advice people have given me to relax my parenting standards.

"Don't worry," they say. "Every kid goes through a picky phase."

"Don't worry,"they say. "I'm sure he won't remember falling off the bed."

We're not really pro-pacifier parents. Our older boys also disdained the paci or binky. We don't mind offering a pacifier to a baby because we feel the benefits outweigh the drawbacks. But when our youngest grew to toddlerhood and started to express a real affection for his his pacifier and then it progressed to adoration, we got a little worried. Then he named it "My." And we were bummed.

But we read just enough to know that it's a pain, and potential future problem, to have a toddler attached to a pacifier. 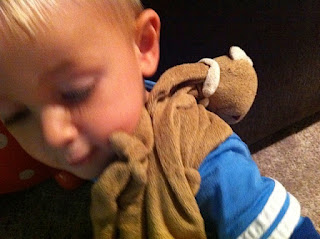 We're aware of the risks. We know about the speech difficulties but his speech is phenomenal (he can say Luke Skywalker perfectly). He has only had a few ear infections in his two years of life, far far fewer than his older brothers. We know it can be a transitional object, but he uses his bear B for transitions just as effectively. We know to limit his time with the pacifier. He got it a lot when we were in Ireland but at home is only allowed to use it before nap time - and doesn't get it at daycare (4 days a week) or at bedtime (7 days a week).

Email ThisBlogThis!Share to TwitterShare to FacebookShare to Pinterest
Labels: Being Boys, Little Brother