"You'll Never Know Until You Tri!"

My headline is the race slogan for the Druid Hill Sprint Triathlon, part of the Maryland Triathlon Series. I completed this race on Sunday, August 12, 2012 - and I have to say it was awesome.

I drove down to Baltimore by myself, and despite the fact I often long for solitude when I'm surrounded by the constant high-volume chatter of my kids, I missed them. Apparently they missed me, too, because moments after I left my middle one was crying.


At the Falls Road Running Store I picked up my race number (171) and some half-price tri gear, but sadly they did not have any car magnets that said "Swim/Bike/Run." I had promised myself I'd buy one but wouldn't stick it on the van until I had completed the race. I'll have to buy one online somewhere, because I rocked this race!

My friend and I headed to the pre-race meeting. This was my first visit to Druid Hill Park and I was amazed at the beauty of the park but sad to hear that drugs and violence marred the nearby neighborhoods. In casual conversation we met a mom and son who were doing the race as a relay team. For some reason, the son asked if we were 18. The mom laughed and said, "No honey these girls wish they were 18."

I am twice that old and more than twice as happy, confident and powerful than I was at 18. I was ready to kick her ass.


I didn't sleep a lot. I downed a power breakfast of coffee and a white chocolate macadamia Clif Bar. My drive to the park took me past two Royal Farms and I contemplated a post-race fried chicken reward. I parked and rode my bike up to the Transition Area (affectionately called TA). I laid out my helmet, shoes, etc. and when I reached into my jacket pocket I discovered one small Star Wars sock. My boys were with me after all! Sort of.


Race time. For this serpentine pool swim we were lined up by estimated swim time and I was waaaay in the back. Right before I jumped in, for luck, I said out loud, "I'm Michael Jackson!" because that's what my two-year-old calls Michael Phelps.

In the pool I felt great, passed a lot of people and finished the swim in 6:48. The results say 8:06 because I had to run down the pool & up 3 flights of stairs to cross the mat.


In the TA, I think I got my race shirt, helmet, shoes and gloves on quickly. After watching some video (taken by my awesome sister-in-law, Professional Race Cheerer), my husband thinks I can speed up actually getting on the bike. Probably true.

The bike course took us out of the park and down a decent hill then up a decent hill, twice. I only got up to about 20 mph and overall averaged about 13 mph. There was one part of the course where we cruised up and down some gentle rolling hills through this gorgeous park - best part of the bike. I think I was actually smiling, it just felt so good! The course was 7.6 miles, not quite 8, and finished in 34:37. I was hoping to do 8 miles in 30 min, but again - something to work on for next year!


After hopping off the bike and running back into TA I messed up on putting my bike back on the rack.  I kept trying to hook the bike on the back of the seat. Finally remembered I had to put the seat under the bar and hook it on the front. Sigh.


Then BOOM time to run!!


My sister-in-law was screaming "This is your part! You own this!!!" I started with a short, quick stride and focused on picking people off one by one.

This 3.0 mile course took us twice around the Druid Hill Reservoir and on that first curve, with the sun still young in the sky, I looked out over the skyline of Baltimore and it took my breath away. I could see as far as the huge dock cranes of Dundalk. I saw church spires, high rises, and rows of those funny flattop townhouses that are the warp and the weft of Baltimore. 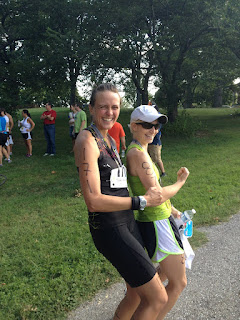 After the race, a great group of (most) of my favorite people all sat on the grass and enjoyed the free food, music and perfect weather. It looked like I was the first "Novice Female" finisher and the DJ made it official! My overall time was 1:10:09, barely a minute faster than my friend who came in 3rd in our age group!!


For many reasons, running this triathlon in Baltimore filled me with joy and thrilled my soul. I couldn't wait to get home to celebrate with my cheering section...and get ready for the next race on my schedule! I'm going to do the Connellsville Triathlon in less than a week. Wish me luck!

Posted by Elizabeth Pagel-Hogan at 11:15 PM