I'm starting 2013 in a different place than I started 2012. Last year I was in physical therapy and had a terrible, hacking cough that lasted for weeks. I'm feeling tons better about where I am this year and feel I am in a strong place to reach my goals. One important thing I learned is that cross-training works really, really well for me.

I started using Runkeeper in March 2012, so these stats aren't from January 2012, but they are close enough.

Since March 2012, I've logged 360 miles running! That's not bad at all and I did know I would reduce my running in November because of NaNoWriMo. I am surprised that this chart shows I haven't done more than 20 miles a week in the past year. It just goes to show that quality matters more than quantity because I ran my fastest ever road 10K this September! 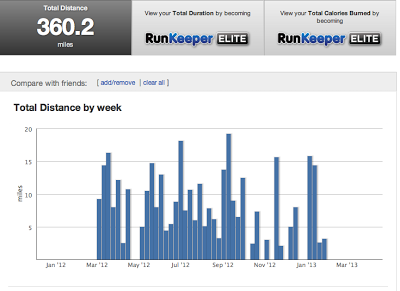 I am not a confident cyclist and I actually bought my first bike in years in 2012. I know I will be starting cycling earlier this year, so I'm thinking I might double (maybe triple?) my mileage this year. 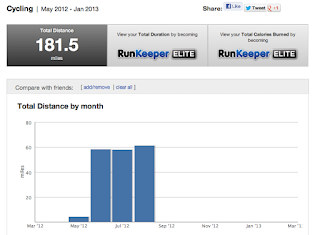 This graph makes me laugh. Seven miles. That's just nuts. I don't think it's right because there were some swim workouts I probably didn't record. Or...maybe I just way overestimated how much I swam? Anyway, I'm starting a lot earlier this year and should definitely show an increase. 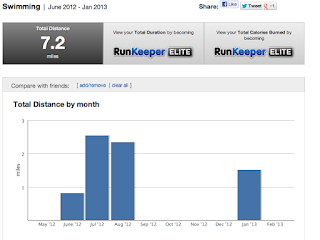 All of these graphs are great reviews of the activity I did, but they are just numbers. The best part is the feeling I have when I've finished a great run, bike or swim and when I know I'm doing great. It's just fun. Really fun. 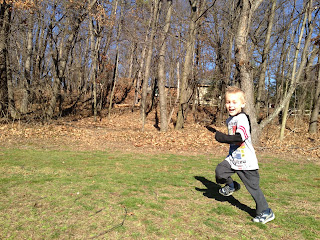 Posted by Elizabeth Pagel-Hogan at 2:06 PM