Are My Kids Weird?


As usual, after he used the bathroom, we asked our five-year-old if he had washed his hands.

"I used the little sink next to the potty!"

Yikes. He used the bidet. 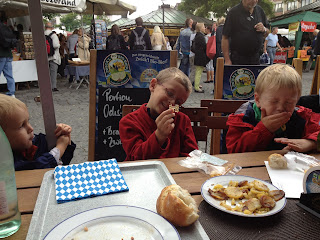 He thought he was doing the right thing and my husband and I felt pretty bad telling him it was the wrong choice. We were finally in Munich after a five-hour delay in the Newark airport.  Only two days into this vacation (an amazing two days) and we were struggling with finding the balance between constantly correcting our kids and making sure they have fun.

I've read tons and tons and times that you should emphasize the behavior that you want to see as a parent, make positive statements. At first I thought the benefits were mostly psychological but now I know it's also a wonderful time saver.

Here is an example:

"Keep your hands to yourself" is a positive behavior statement. It illustrates the behavior you expect, sets clear boundaries, and saves you lots of time. Because I didn't stress that in the airport the rule is keep your hards to yourself, I had to say these things: 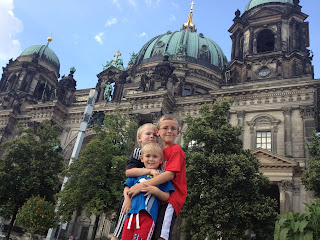 At home it's pretty easy to give my kids downtime and let them run a little crazy in the backyard or our living room. But on vacation, we try to strike a balance between correcting our kids and letting them enjoy themselves, but that means we're constantly navigating the borderlands between what our kids want to do, what we are willing to let them do, and what strangers around us will tolerate.

I know that self-restraint and self-control take time to develop. I know they don't have the empathy to respect the needs and personal space of strangers. I also know they are not malicious kids out to willfully bother anyone (except their brothers).  It's hard when I'm trying to prioritize my kids' wants and strangers' expectations - which is of course impossible.

So when I can I let them shake, wiggle, jump, shout, roll on the ground, and generally get their crazies out. When I can't, I am admonishing them to think about how their actions might be bothering other people. 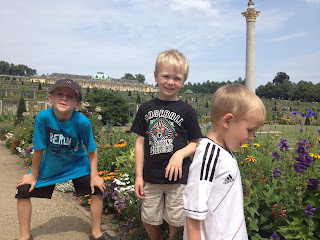 I am also struggling to teach them about polite and impolite behavior and appearance without telling my children that they are not "acting cool" or even "acting normal." I know that "normal" includes a range of behaviors. For instance, there are over 20 versions of normal crawling. Any one of these indicates normal development. But some of those crawls look kind of weird.

My kids may be doing normal kid behavior but it still looks weird when my 7 year-old tucks his arms and legs into his t-shirt and stretches it into a tent around his body. Or when my 5 year-old smells the salt shaker. Or when my 7 year-old slides way down in the chair and puts his knees by his ears and sticks his bottom out at everyone walking by. Or when my five year old repeats "Mister Meister" like 500 times. Maybe 600.

Someone please tell me, at what age will they figure out that kind of stuff is just weird??  And when it finally does dawn on them that it is a little strange, will I miss their absolute disregard for the opinions of other people?

Posted by Elizabeth Pagel-Hogan at 12:02 PM