There are things I regret, but there aren't many. Here are two:

1. I regret inventing Story Train. One night I decided I'd handle all 3 boys at bedtime and give my dear husband a break. I invented this adorable little activity called Story Train. I called out "All aboard! Conductor says pick out your books!" I chugged around the upstairs hallway picking up passengers at their stops. We all snuggled in one boy's room and read stories. That one night worked great.

And then my middle son wanted to be conductor. And the arguments started. "I'm the conductor!" and "No, you're not, Mom is!" and "I hate Story Train!" (that was me). So now when someone says "Let's do Story Train!" I cringe and mentally berate myself. 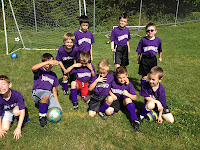 2. I regret not saying No at my first soccer tournament as a coach. My first season coaching somehow my team finished the season finale soccer tourney tied for third place! The boys rushed off the field sweaty and thrilled and I passed out snacks and drinks and they started celebrating. Then another parent - not involved with either third place team basically demanded we play sudden death to see who came in third. I was too new at the whole coaching thing and against my instincts I agreed, called my boys (the Dynamite) back on the field and in less than 15 seconds the other team scored and we were in fourth.

There were no medals for third or fourth place. It didn't matter. No one was getting called up to Premier League. I should've said "Nope, tied for third is perfectly fine."

Neither of these items are earth-shattering or life-changing, but they definitely taught me valuable lessons.

I recently asked friends on Facebook what their small regrets were. Some of their answers mentioned things that seemed pretty big to me, like marrying someone ten years earlier, going to college, having a third child.

But I really liked when my mom mentioned she wished she'd taken better care of her original Barbie doll. To me, that is totally the essence of the small regret. Something that doesn't significantly change your life, but after it happened, you learned a lesson.

Got a small regret?

Email ThisBlogThis!Share to TwitterShare to FacebookShare to Pinterest
Labels: Family, My Comfort Zone