Midnight Radio Jr.: Underwater Voyage is a Hit with the Critics! (my kids)

Local Pittsburgh kids looking for a memorable and entertaining family show better get downtown to Midnight Radio Jr. by Bricolage Production Company.  They invited our family to attend a show on the house and share our thoughts afterwards. The critics (my boys) gave rave reviews and repeated the words "awesome," "fun" and "cool" over and over.

We could choose Mad Science or Underwater Voyage, and the boys unanimously selected Underwater Voyage. When we arrived they jumped right into the deep end of crafts and games with oceanic themes. The dreadlock jellyfish was a favorite as well as pin the tail on the merpeople.

Introducing my children to the concept of a radio show really appealed to my historic side since my kids only know iPhones for music and barely know that music used to come on CDs and cassette tapes, let alone radios.

We took our seats in the cozy audience area and eagerly awaited the show's start. This production isn't one long story. It's a collection of skits, songs and stories. The actors did a phenomenal job creating different voices for the different characters. The boys also grasped the idea of an 'Applause' sign easily but very quickly didn't need it. They loved the show and clapped spontaneously. There was enough visual content to keep but we do listen to books on tape so this wasn't the first time they had to use sounds and imagination to follow a tale.

After the Petulant Patrick skit, my middle son asked "Will they do another one of those?" But before I could answer, Josh and Gab hopped on stage and my middle son was completely captivated. This was his first rock concert and he was hooked. He nodded his head to the beat, moved his body, and tried to sing. Of course we bought a Josh and Gab CD and even got it autographed. (We now know all the words to their songs. It's been one week since the show.)

While the bulk of the show was light-hearted, one brief commercial about the Pacific Trash Vortex was bitterly funny. But after experiencing Strata, I shouldn't be surprised the Bricolage wants the audience to feel the full range of emotions. 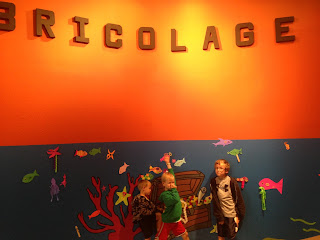 After the show we stayed for the workshop on telling a story with Foley sound effects. Middle son was the first to break the ice and experiment with walking shoes on a table and soon jumped into making rain with a spinning wheel and then snapping a belt for a whip-crack during a hold-up of a stage coach. The oldest and youngest soon joined in the fun, too. The whole idea of telling a story with sound effects was such a hit that the next day I presented the boys with a sound effect machine I had been saving and we spent an enjoyable Sunday afternoon telling stories and acting them out with hilarious sound effects.

The show is aimed for kids 6-12 and even though some material was over my youngest's head, it was still really entertaining for him. My husband and I laughed often and we would eagerly take them to another production - and we'd love to see you there!

Posted by Elizabeth Pagel-Hogan at 12:10 PM