How to Cook Squash (3 Ways)

When I don't know how to cook squash, I turn to my amazing friends. These people generously offer their advice, support and mockery when it comes to my cooking skills.

These homely gourds have been sitting on my counter for weeks days. We got them from our CSA, Penn's Corner. Honestly, the thought of transforming them from centerpieces to edible side dishes confounded me. So I turned to my real online friends and asked: 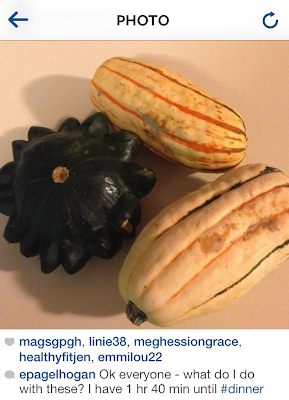 I must say the responses were incredible. I received such good ideas that I decided to prepare each of the seductive squash in a different way.

For one of the yellow & green stripey guys (Delicata) I followed a simple roasting strategy suggested by a good friend out in California.

I anticipated a freak-out if I served "squash in it's own skin"so I scooped the soft, sweetened flesh into a bowl for the dinner table. I particularly enjoyed this rendition but the squishy, mushy, stringiness turned off most of my dining companions. More for Mommy.

Next, after unraveling the mystery of what kind of squash that green one was (Pattypan) I followed some recipe that I googled. 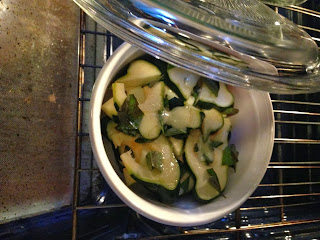 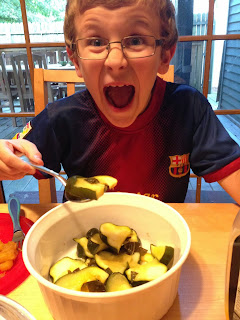 Sliced - not peeled - and roasted until soft with butter, sea salt and fresh basil, this pattypan squash dish was a nice savory counterpoint to the other two sweet dishes.

(Yes, I served all three of these squashes on the same night. So what? I'm not cooking squash three nights in a row. Better to get it all done at once.)

Finally, inspired by one of Pittsburgh's great chefs, I approached the third squash.

@daveracicot Peel? How do you peel a squash? I'm not being an ass. I swear.
— Eliz Pagel-Hogan (@epagelhogan)

Not only is this man a great chef, but he's also a comedian.


@epagelhogan oh boy. Put them back in the refrigerator and order Chinese
— dave racicot (@daveracicot)

Undeterred by his lack of confidence I successfully peeled my first squash. Then I gutted it, cubed it and starting cooking it. 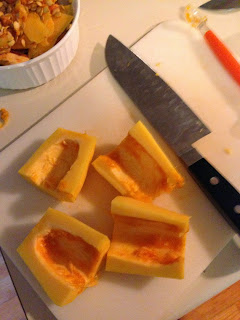 I'm not actually a bad cook, really. I'm just an easily distracted cook. There are lots more interesting and important things to do than stand around and watch squash and it's ingredient buddies chemically transform in the crucible of my saucepans. But since Dave went to all that trouble to mock me, I stood there and watched the squash. (And poured myself a glass of wine.) (And played Tilt to Live.) 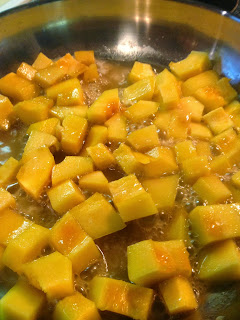 It smelled good. And I was right, my kids were more willing to give the cubed squash a try over the roasted mushy squash. In fact all three children tasted the cubed squash. Yep, even Mr. Picky. I told him "It tastes just like sweet potatoes!" to which he indignantly replied, "But there aren't any marshmallows!" (Damn you Boston Market.) 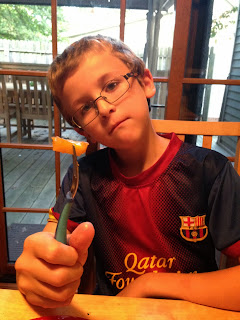 And that, dear reader, is squash three ways.

Posted by Elizabeth Pagel-Hogan at 9:44 AM