July was a busy race month for me! I did the Sweet Sprint, the YMCA Butler Triathlon, and then the Scottdale Library Bookworm Triathlon on three consecutive weekends. It was tiring but it was also tons of fun. And I couldn't miss a triathlon that supported a local library. Triathlons and books and my favorite guys: a perfect combo.

The Bookworm Triathlon offered a new thing for me to try: a triathlon relay team. Since my husband hurt his leg he couldn't run and he still avoids swimming, so I did the swim and the run while he rocked the bike. It was awesome being on a team with the coolest guy I know.

But it was also the first time we had a pit crew: our boys! We had a great plan - I'd swim and my husband would keep an eye on the boys while they all cheered, then when he got on the bike I'd take over watching them and then he'd take over again while I ran.

The race was pretty short: 300 yd swim, 15 mile bike and 3.1 run. This event also offers a Super Sprint and a Duathlon. I was hoping to get more details on how the relay would work and what time our heat would start. Unfortunately almost all of the emails from the race director went into my spam folder. So we headed down as early as we could manage with the kids in tow. 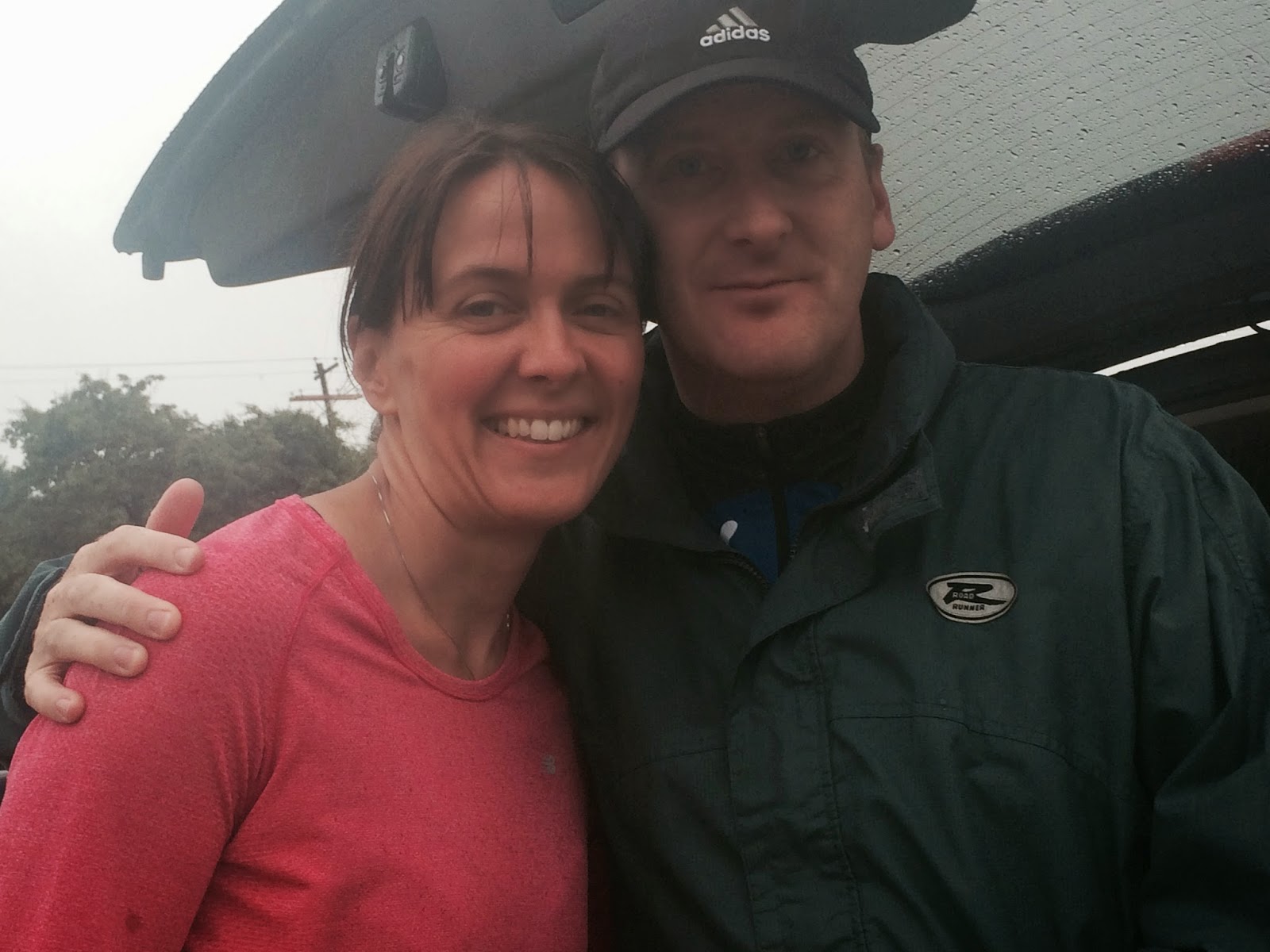 It was drizzling rain and and the race organizers were very friendly and we were able to get the van into a spot right next to the transition area. Check-in happened in the library and the bathrooms were super clean - bonus! Things were a little confusing when it came to body marking (because I hadn't received the earlier emails) and we didn't know if we were in the Over-100 or Under-100 Relay group. Did we add our ages three times? Or only two? We went with  adding our ages twice since there were only two of us on the relay team. 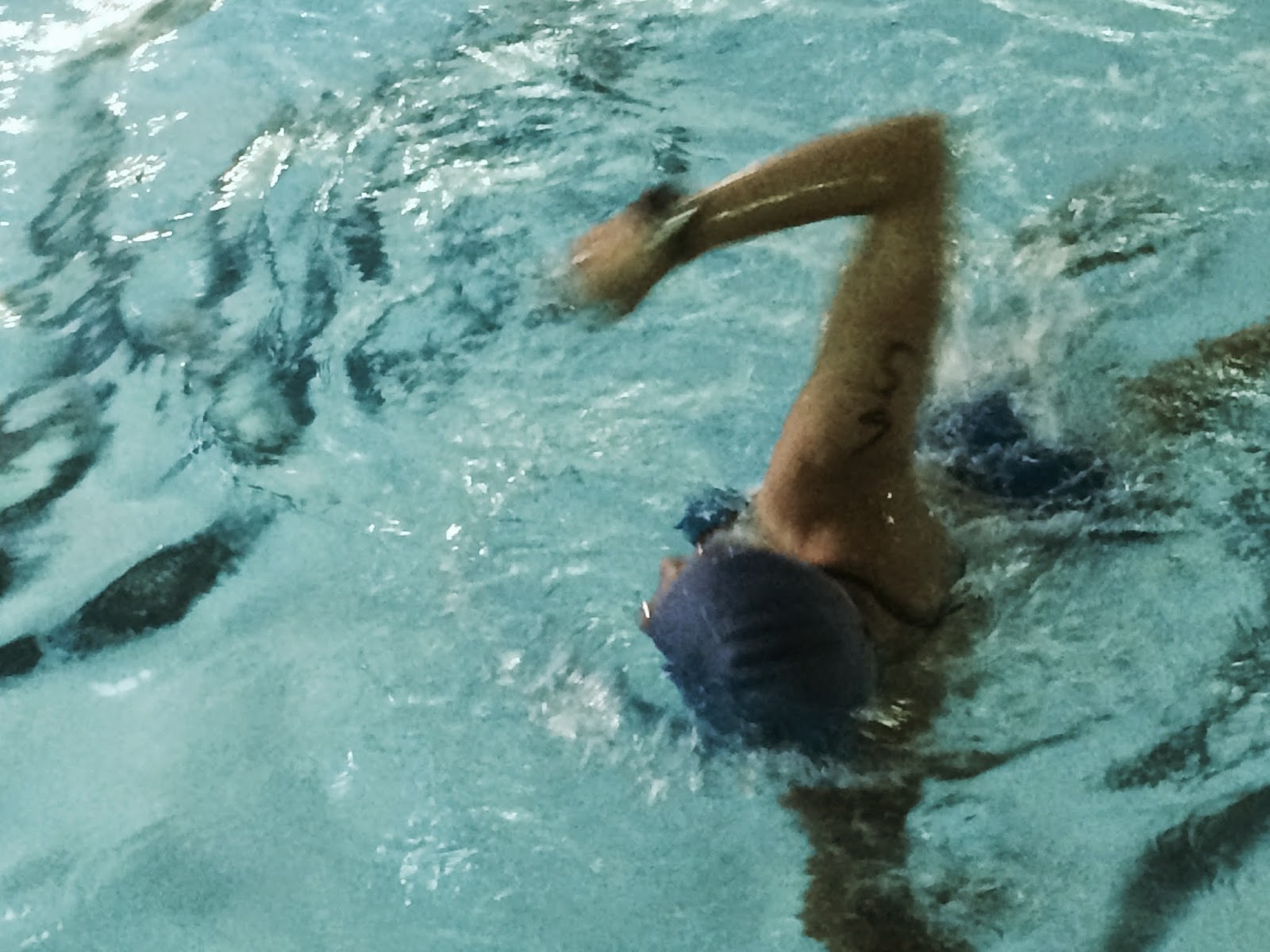 The pool was in the community center right next to the library. Very convenient - but still I almost missed the start of my swim heat! There was no time to warm up in the pool so I jogged a lot to get my heart rate up and when I could get in the pool, I did one or two quick laps. The pool tasted salty, not like a regular chlorinated pool. There were four big lanes with three people swimming in each lane. I was happy with my time, 6:20, and a teensy bit happy that I beat everybody in my lane, and one lady in the lane next to me!


My nine-year old was my official race photographer and he captured some seriously funny photos of me swimming, as well as a classy slo-mo video.

We had to run to the door of the pool and pass the timing chip off to our relay partners. My husband grabbed the timing chip and headed across the small road into the transition area in the parking lot. He was able to run across some carpets but he did have to cover a good bit of asphalt in his bike shoes. He had a great bike time, around 45 minutes, and I was able to keep track of him using Find My Friends.

He described the bike ride as "Nice ride, leave small town USA, ride through country back into town down hill hell-bent for leather." 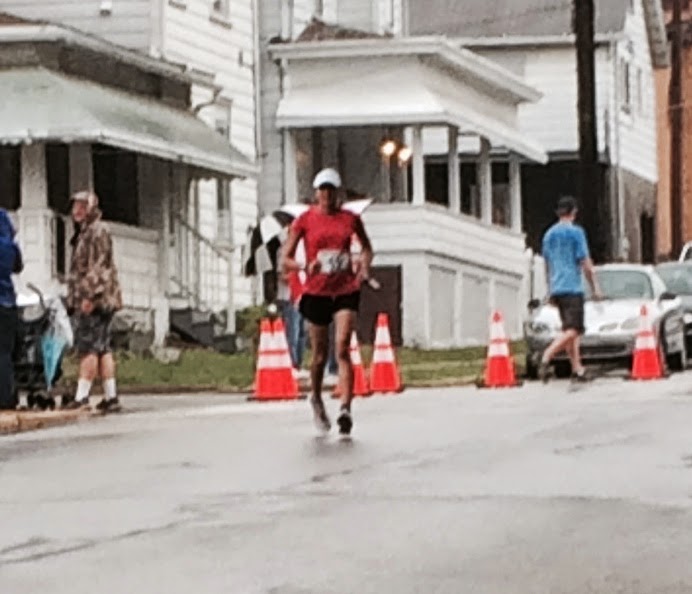 The boys read books, ate snacks and argued with each other in the van.

After the bike, my husband had to rack his bike and then run to the bike exit to hand me the chip.
Then I set out on the run. The run was an out-and-back that had a nice little downhill to a trail in town that was nice and flat. There was a little problem on the course where the paved trail ended and a small gravel trail shot off to the right. At least two people didn't turn right but turned around at that point. I kept going and found the actual turn around point.

I finished, which meant climbing the small uphill back to the race staging area, and felt great about my time, 24:46. Our overall time was 1:19 and we were very proud. We thought we had a decent chance of winning our relay group. But when the results were posted a team had a time of 59 minutes! We were pretty surprised a team could have beaten us by 20 minutes. We weren't super-fast, but where could they take twenty minutes from us?

After the race we enjoyed a really delicious snack selection of tons of fresh fruit, protein bars, cookies and more. And don't forget the Bookworm part of this event. Next to the library was a lovely gazebo and some benches that were memorials to people who supported the library. One had a really perfect quote for our family: "More blessed than me you can never be, for I had a mother who read to me." 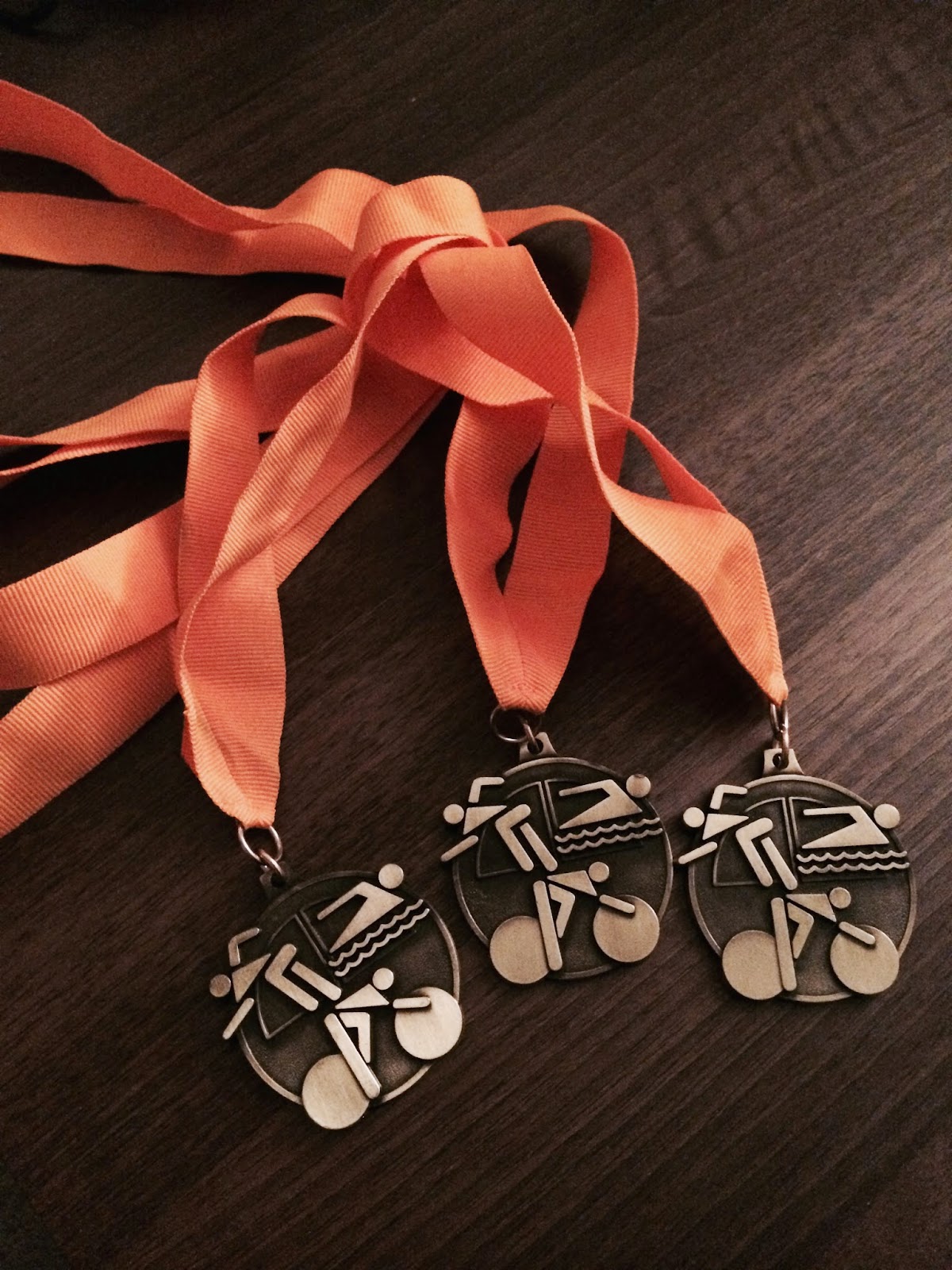 We waited around in the off-and-on rain through the awards ceremony hoping to come home with medals. At the very end of the ceremony, the race director explained there was a problem with the relay timing and they'd send us our medals. And they did…three medals in three separate envelopes, all of which were torn in the delivery process and put into those special plastic bags the post office uses when there's a problem. Some say "Over 100" and some say "Under 100" but we don't mind. Really we just had fun racing on the same team together.

My oldest thought we should give the medals to Dad because he doesn't have as many as me (ha!) and my youngest was thrilled that we had a medal for swimming, biking and running. He loves wearing our race medals and running around the house.

Overall, there were some hiccups during the event but nothing terrible. The organizers were friendly, answered all our questions and it was great we were able to bring the boys. I'd really consider doing this event again next year with my favorite racing teammate.
Posted by Elizabeth Pagel-Hogan at 12:36 PM