Travel with Kids to Spain - Art and Culture

Back in June, our family traveled to Spain and gathered an amazing set of experiences. I had the chance to break out my rusty Spanish. Of course, since it was American high school and college Spanish, it didn't quite fit with Andalusian Spanish. And I had no experience with Catalan, the language of Barcelona. But that didn't stop me from trying and learning. Those are two big priorities in my life and I hope my kids adopt those as priorities, too!

I asked a good friend how to help me say "try it" in Spanish and he said:

You can read about the food we tried and loved during our trip, but this post is about the art, culture, and history we experienced on our journeys. The castles of Spain, like this castillo in Malaga, are so different from the Irish and German castles we have visited on other trips. The boys enjoyed climbing all over and imagining armies attacking. While we visited this castle, music from a brass band drifted up to us from the bull ring in the city below. The cafe at this castillo was truly excellent, too. 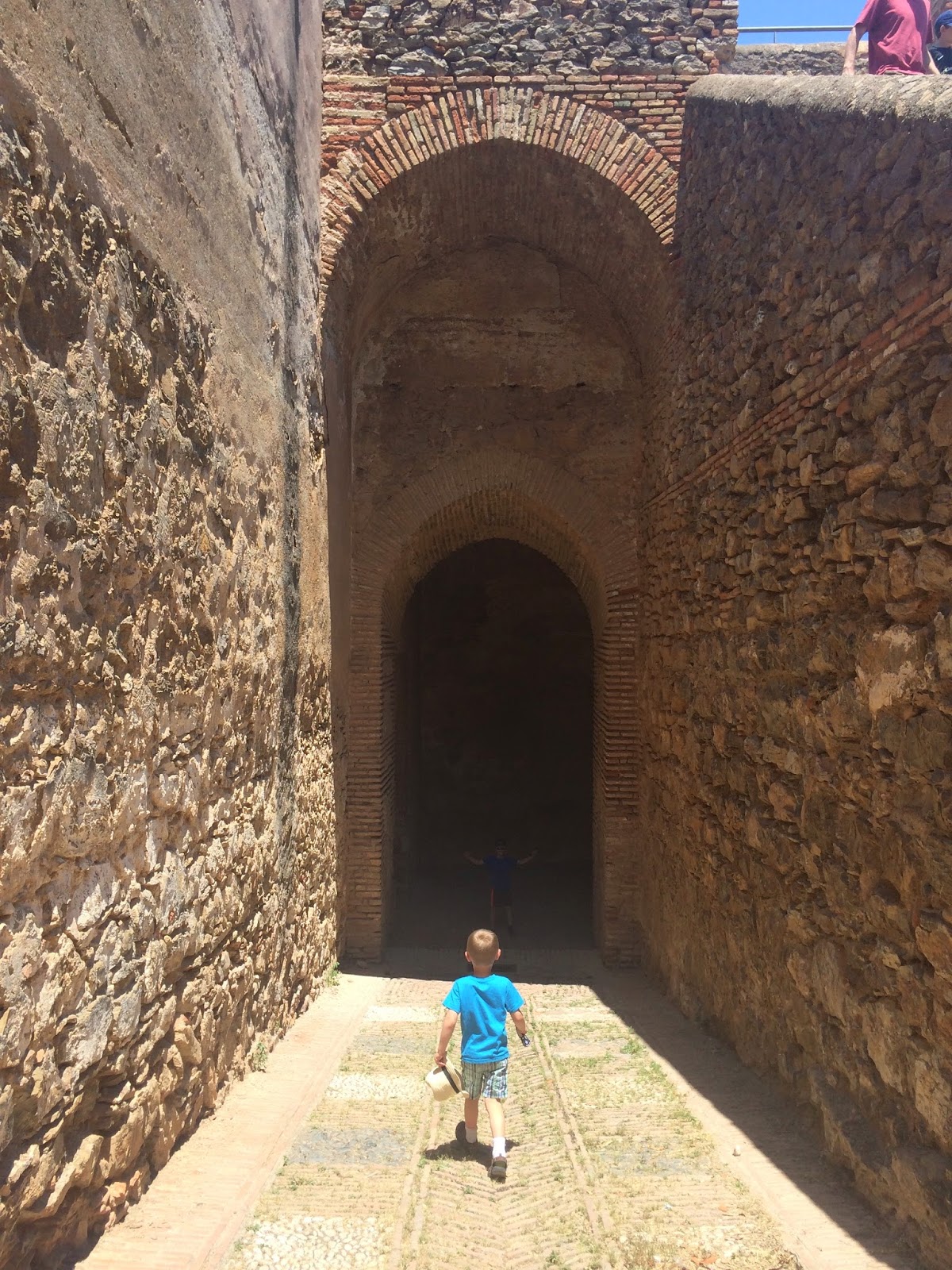 We rented a minivan and traveled easily around the south of Spain. We took a long drive (over an hour) from Malaga to visit El Torcal, a natural park featuring an incredible limestone landscape. We took a longer hike than we intended but we have some excellent memories looking for the Robot and being found by a fox, un zorro, during the hot, spectacular hike. 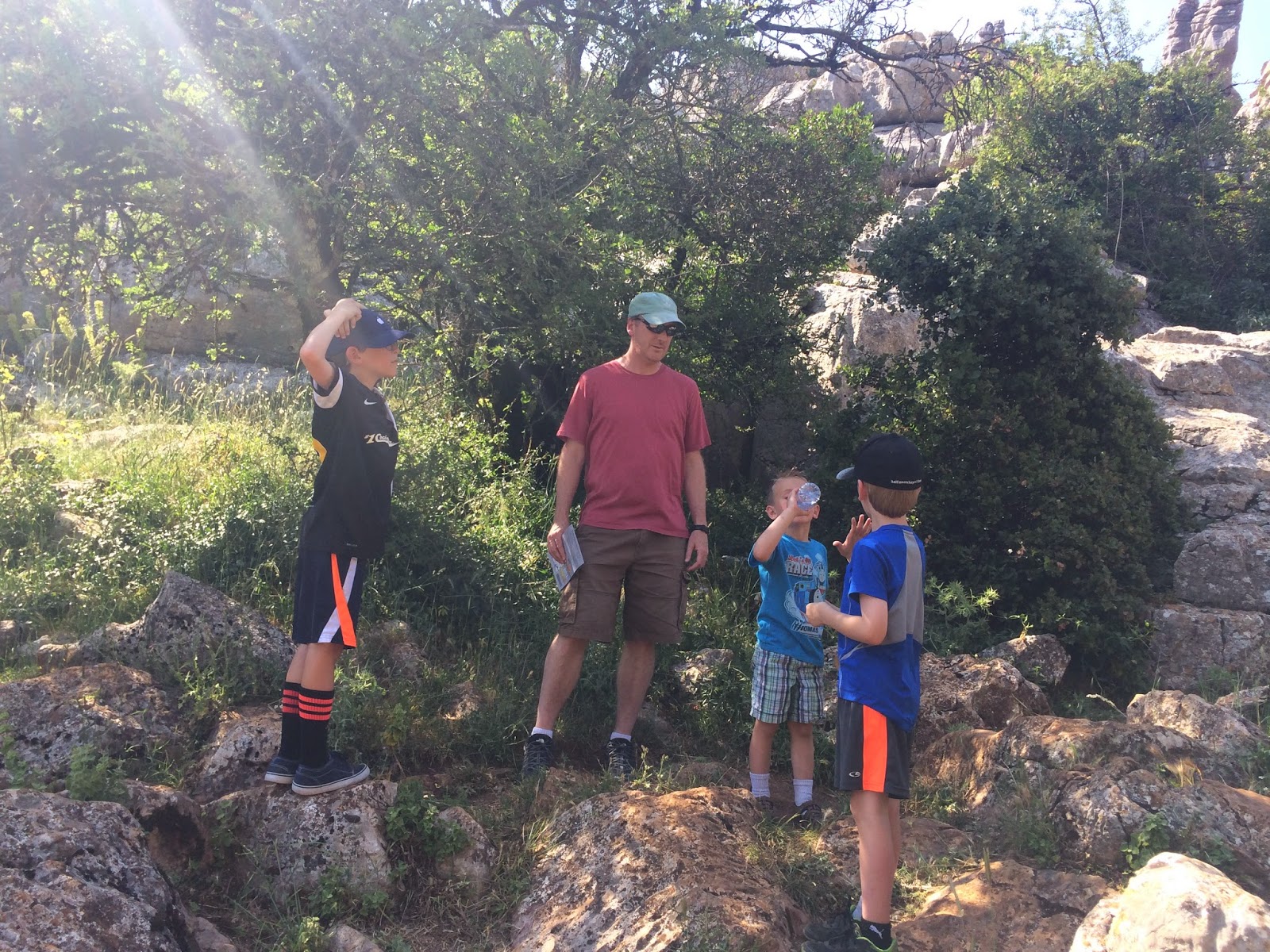 The roads were so easily to travel. They were wide, well-marked and well-lit. The landscape looked incredibly Californian, but the road signs reminded us we were in a different part of the world. We explored the options of day trips to visit Northern Africa, but felt the trips would be really tiring on our younger children. 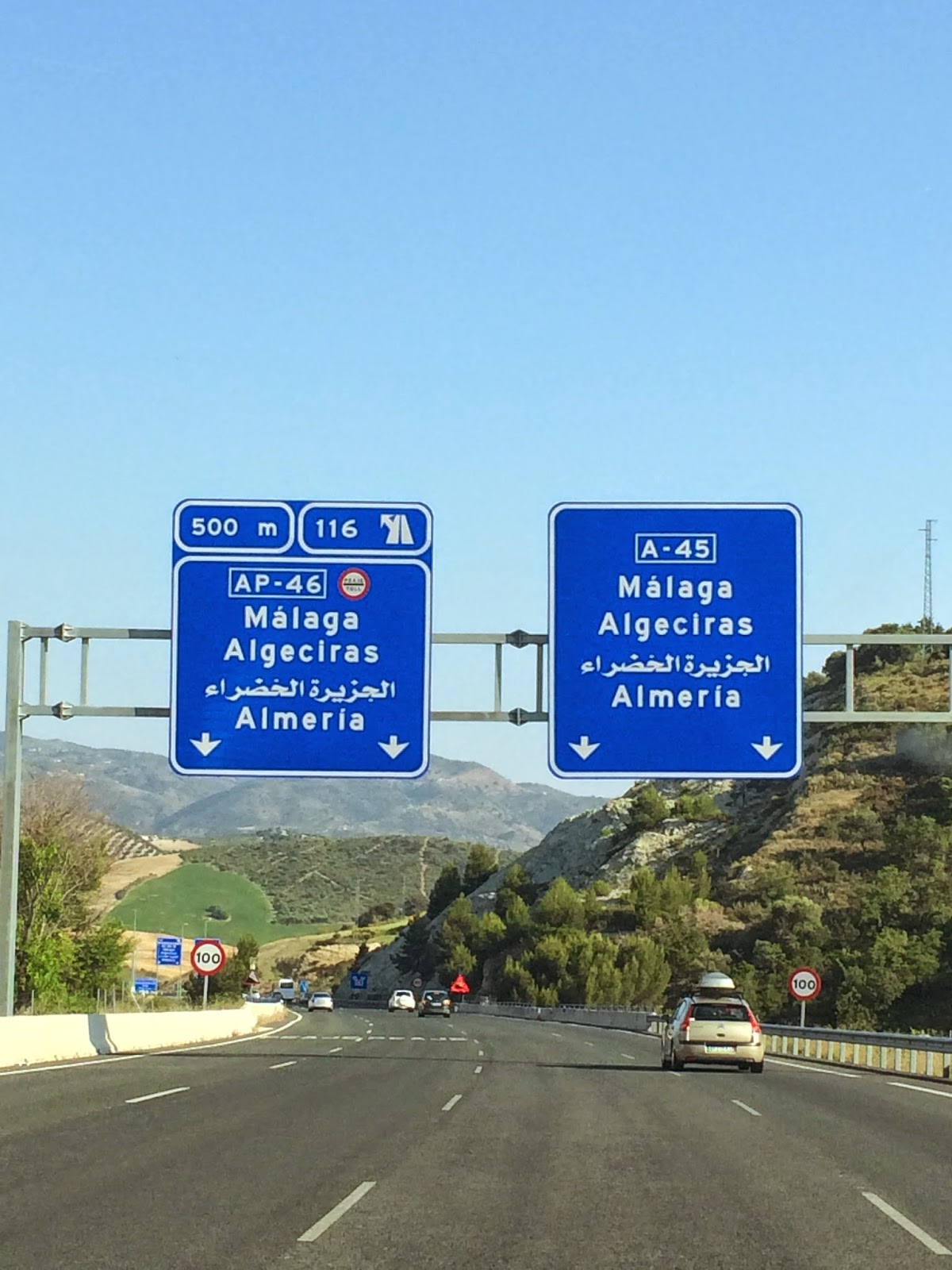 Instead of day trips to North Africa, we took day trips around Andalucia. One trip took us to Granada, the city that Queen Isabella described as "jewels scattered on a hill" and compared to the seeds of a pomegranate. During lunch, I felt this little piece of graffiti captured a great message for our whole family. 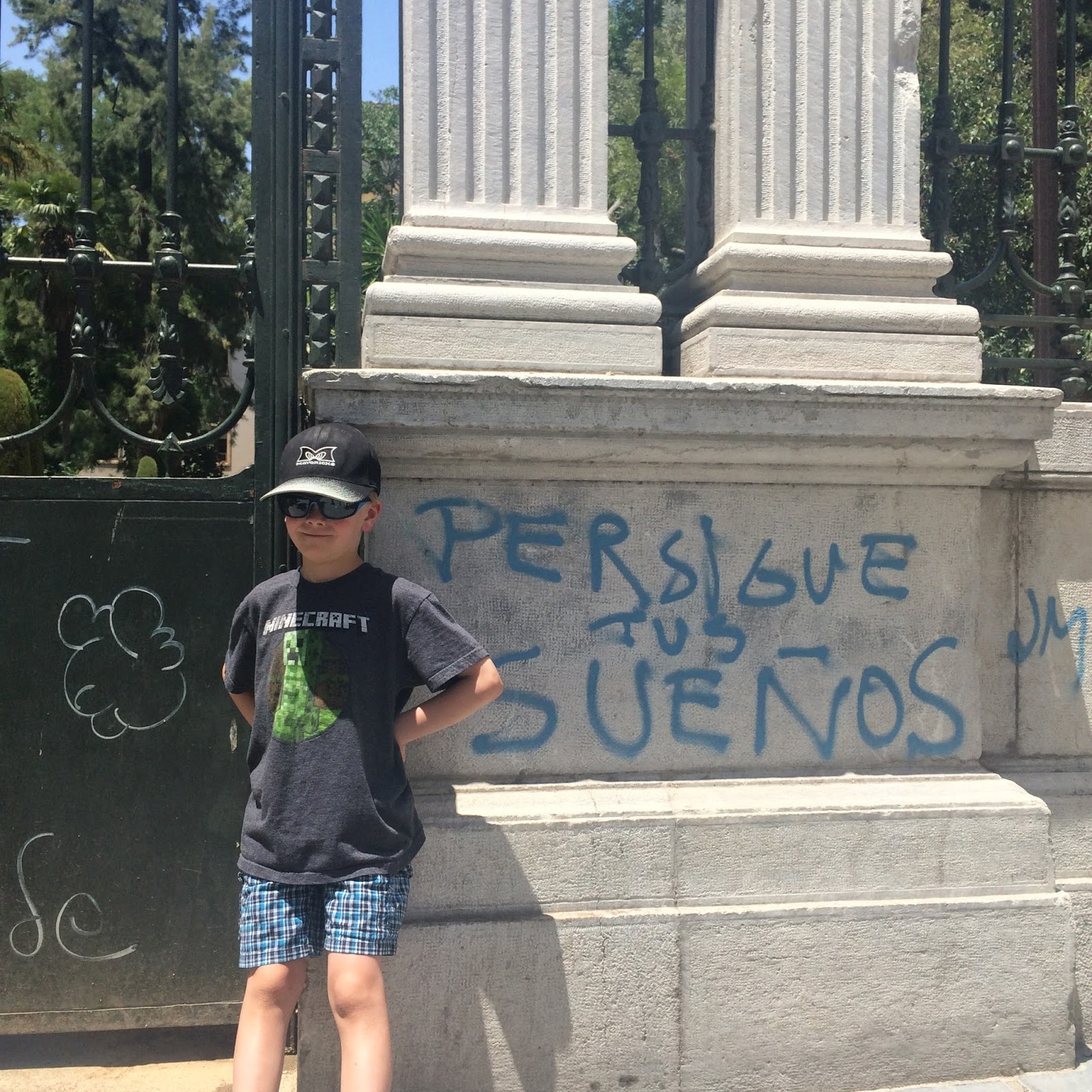 In Granada, we were lucky to secure a time slot to visit the Nasri Palace in the Alhambra. The boys were prepared for this experience - well-fed and warned - so we had a much better time here than on some other museum trips. The Courtyard of Lions was a real point of interest as were the elaborate geometrical designs in even the most hidden spaces of the palace. 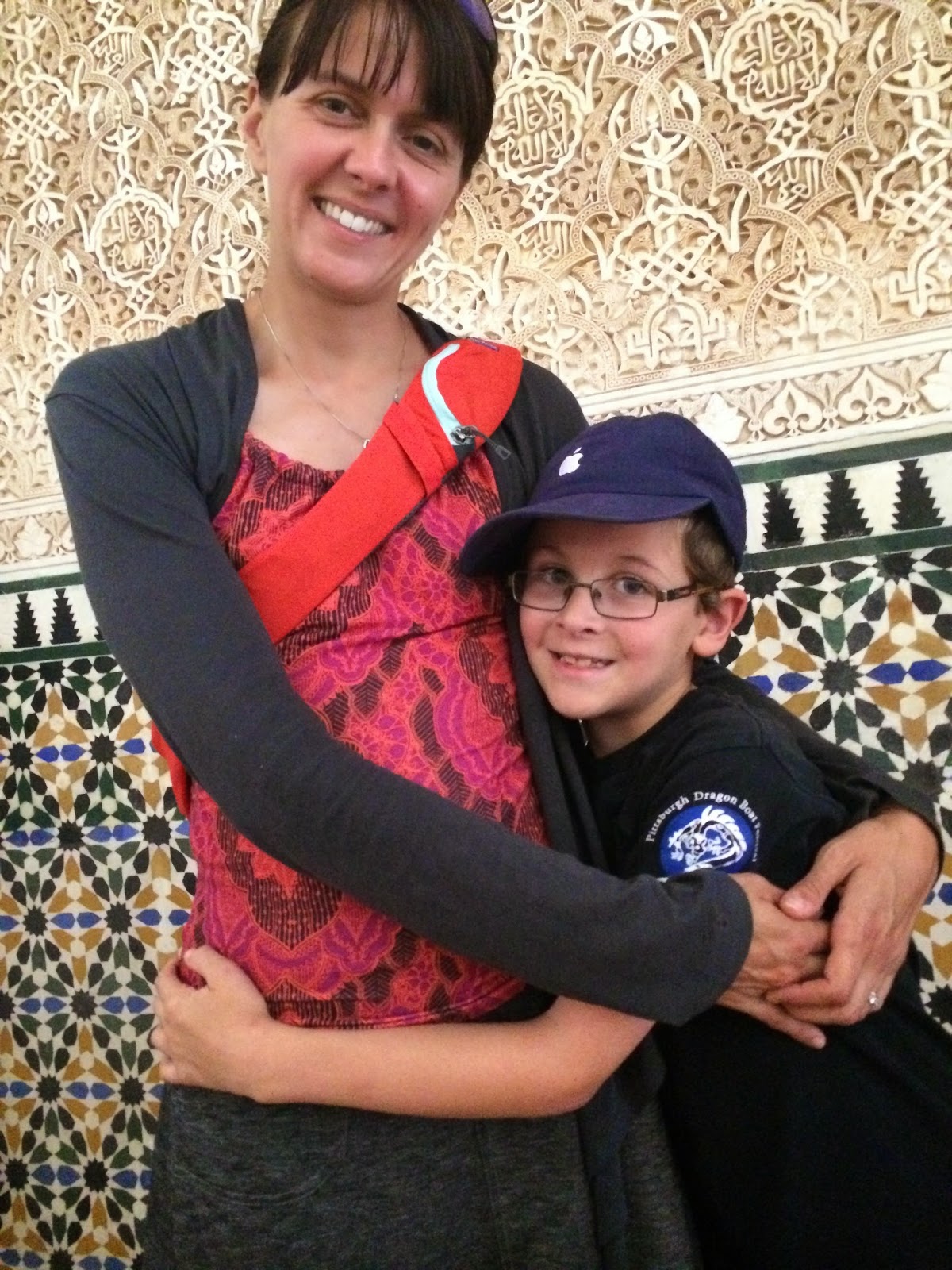 We were in Spain at the start of the World Cup, and it was everywhere. On televisions, news, in hotels, shops - everywhere. The boys loved it, and frankly so did we. The country of Spain didn't love it so much when their team was knocked out early. Awkward! 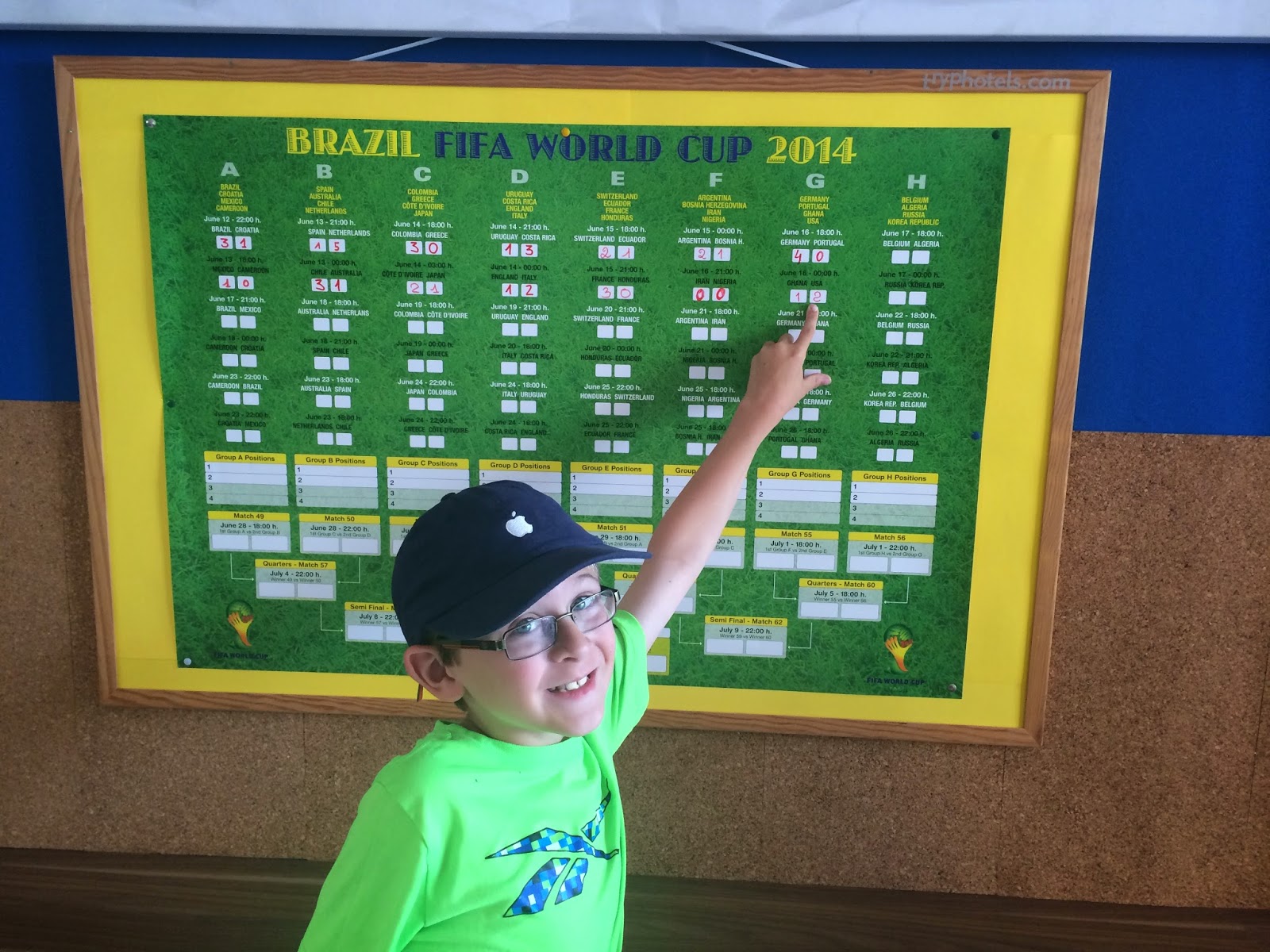 Despite Spain losing so early, our boys were still soccer crazy and were so eager to collect a variety of player kits and balls everywhere we went. We made sure to find some open space for them to run around and imagine they were the stars of the World Cup. Here you see Neymar facing off against Ronaldo on the grassy lawn of a university near our hotel in Barcelona. 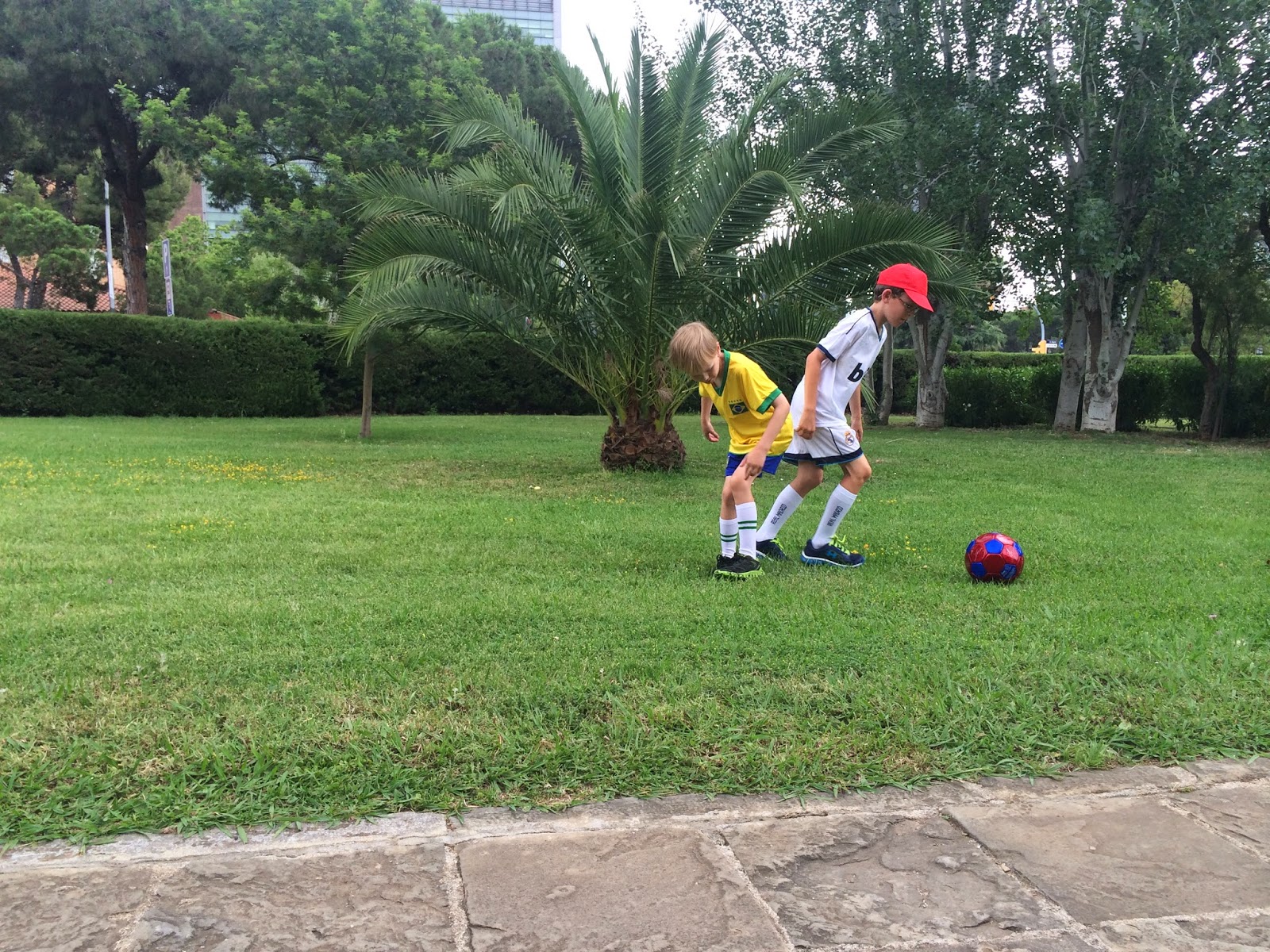 The architecture of Barcelona was a serious highlight to our trip, and I could post more photos than you'd ever want to see. But I'm just going to share this tantalizing image from our visit to Gaudi's Casa Batllo in Barcelona. The House of Bones, as it's often nicknamed, is in a high end part of town and worth a visit. We took a chance with this visit, we weren't sure our boys would be able to behave and they weren't sure they wanted to take the house tour, but we decided to try it! We told them "Vamos, atrévete!" And it was worth it. Each boy got an audio tour set and they loved winding their way through the incredible rooms and listening to the detailed descriptions of how the walls, windows, door, stair rails - just everything! - was designed so precisely. We found mushrooms, bones, mollusks, dragons and waves incorporated into every aspect of the house. The boys were also inspired by Gaudi's innovative cooling and lighting techniques.  Our middle son was a bit miffed that only Dad got the super fancy visual tour that included a mini-tablet to carry around and view the house as it looked when it was a home. 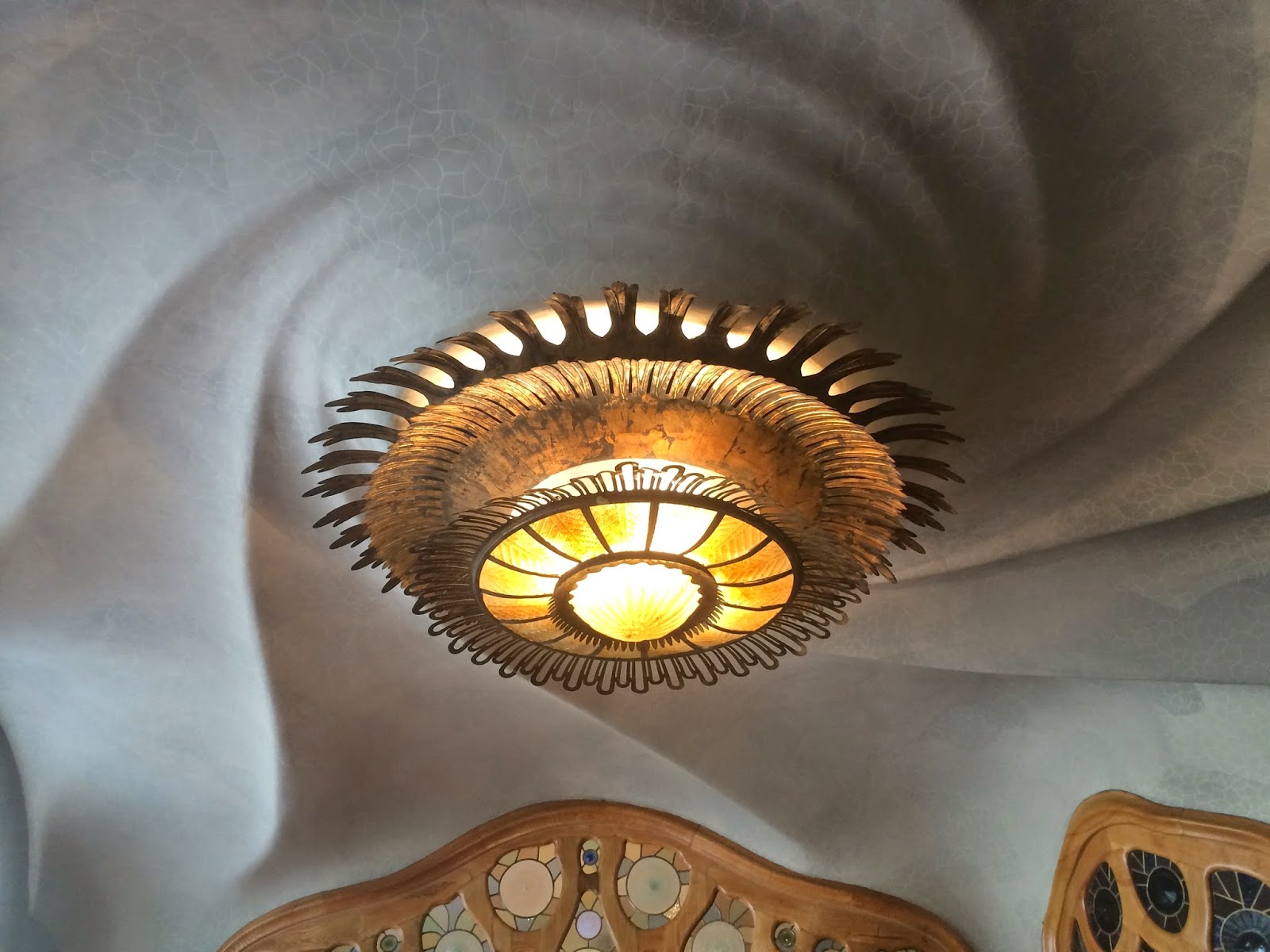 Since the boys were so engaged learning about Gaudi's Casa Batllo, we decided to take them to the Joan Miro Foundation museum and do the audio tours there, too! Though the boys hadn't behaved very well during our visit to Picasso's museum in Malaga, we thought perhaps they were ready for Miro. And they were, mostly. Miro's work is so colorful and there are some huge pieces to view. The audio tour here included small movies on the device to help explain the creation of some of the pieces and they loved the video that came along with "The Navigator's Hope." Could it be our children were experiencing a love of art? Certainly the description of Miro's "The Caress of a Bird" caught their attention. Perhaps it was the soccer ball used to represent a woman's buttocks or a toilet seat as her chest, but they certainly remembered this piece of Catalan culture. 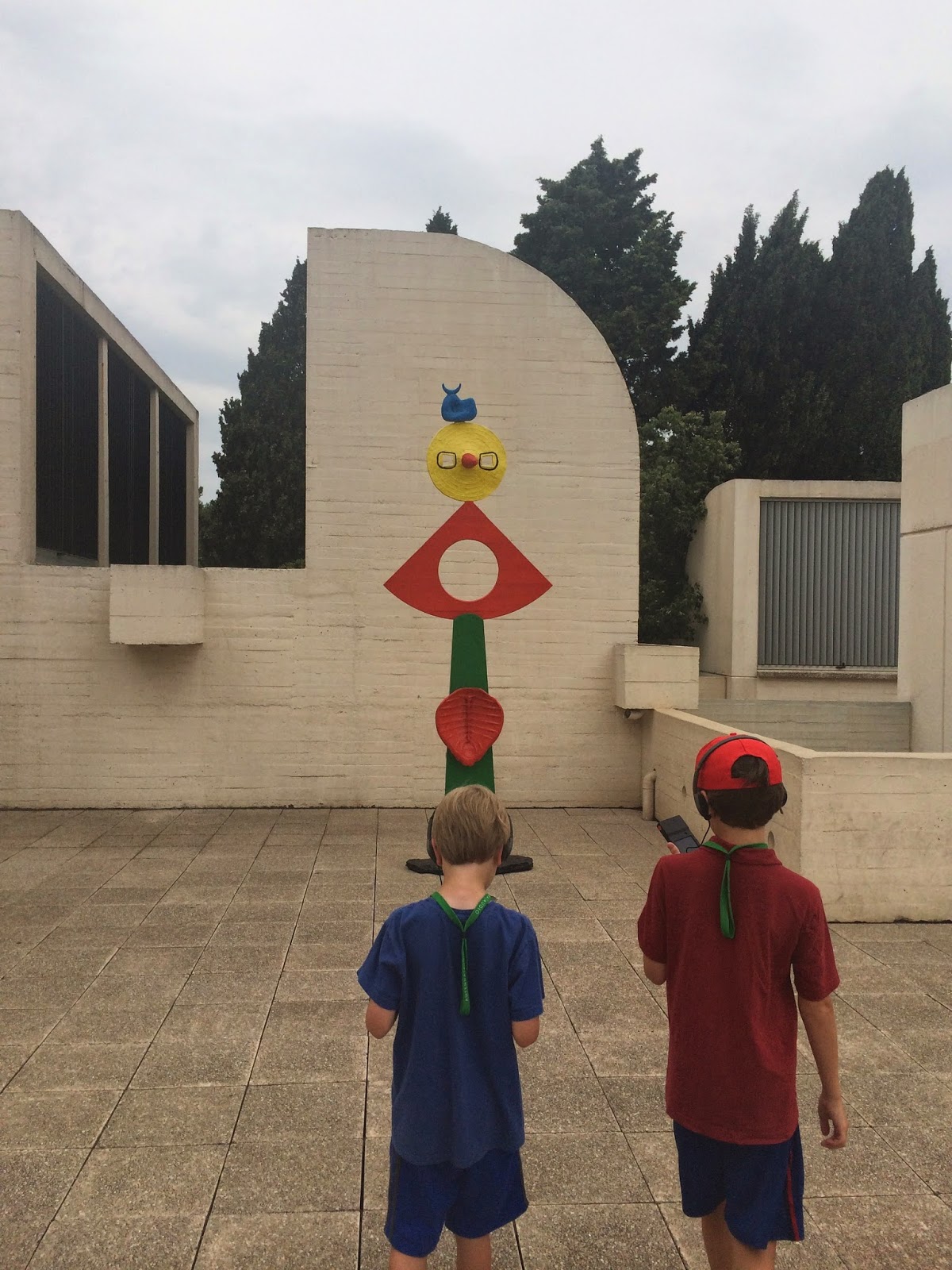 Not all of our museum visits were this easy. Our trip to the Picasso museum in Malaga had some behavior troubles and I think the boys were tired and hungry. But even though they weren't at their best, we realized they were absorbing something during every visit. Take a look at this doodle by my middle son, titled "Animals Everywhere." I can see an influence! 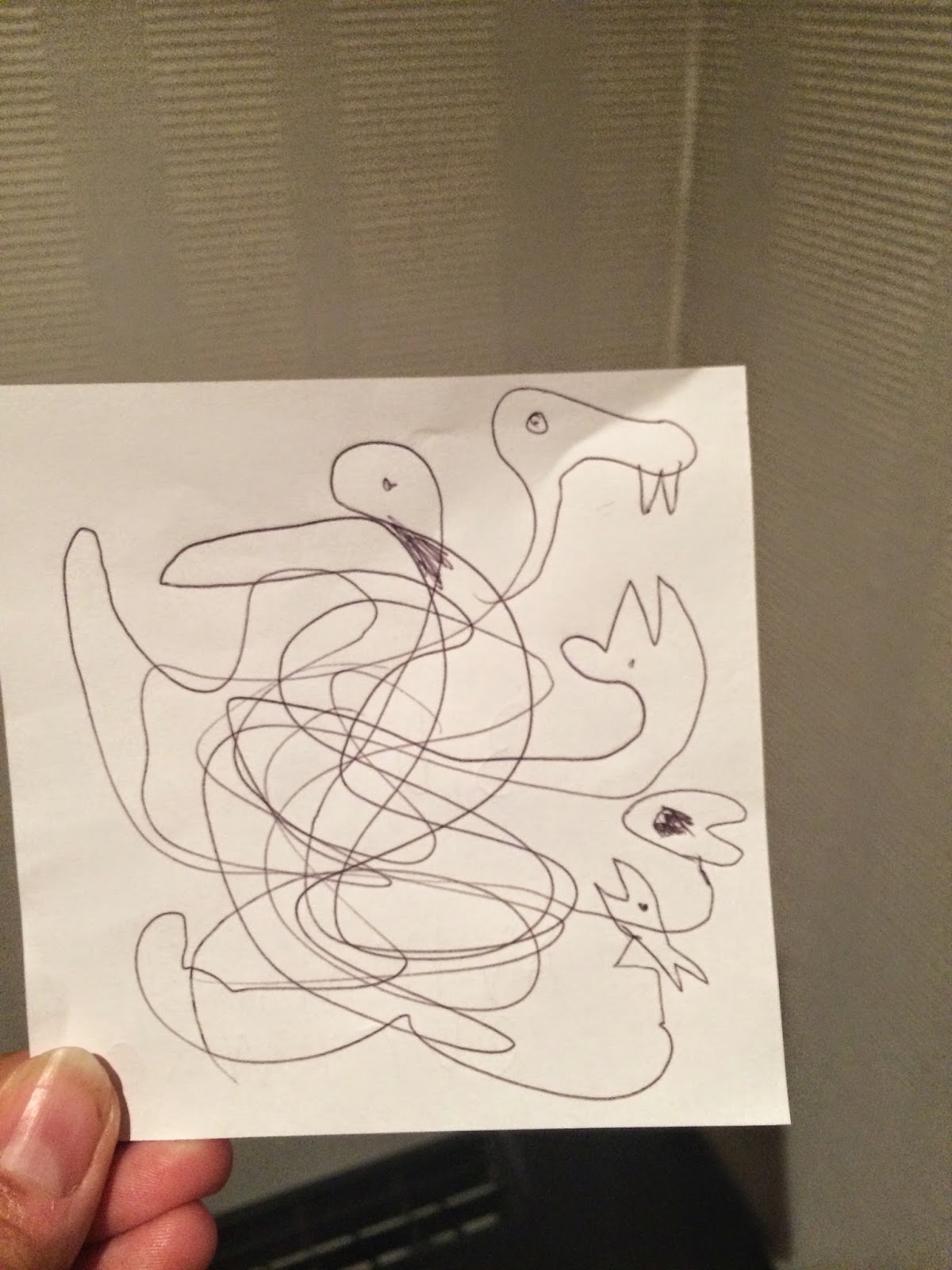 Posted by Elizabeth Pagel-Hogan at 11:00 AM