Pittsburgh Great Race and Racing in 2014

Last year at this time my foot was in a boot and it was hard for me to even walk around. But this year I'm celebrating a very decent time at the Great Race and feeling good about upcoming events. For the Great Race, I wasn't quite sure what my pace would be. I decided to be conservative and aim to go under 55:00 and expected I'd maintain a pace of 8:45. 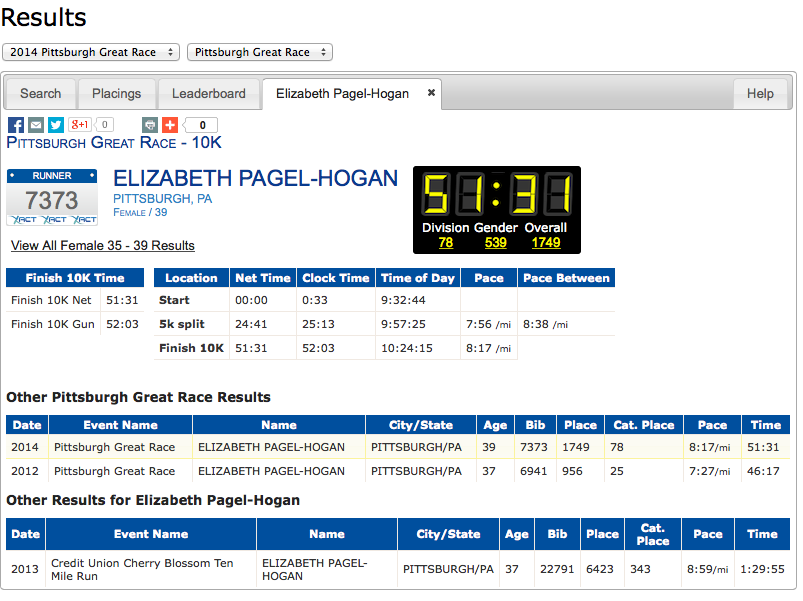 It was a gorgeous morning and even though I thought the race started at 9:00am (but it didn't start until 9:30am) I realized I was moving along faster than my goal pace at the 5K. I decided to hold it and push it as long as I could and finished in 51:31! It was satisfying to be faster than my goal but also a little irritating to be that close to going under 50:00.

But really I'm thrilled with this race. And as I looked back over my racing calendar I realized this has been a big year for me! I've completed the most amount of races I've done since my "return" to racing in 2011. I completed a total of six events this year and my calendar was a nice mix of old favorites and some new events. I also had my first DNF, which was a very uncomfortable new experience. But my year of racing isn't over yet: I still have the Buffalo Creek Half Marathon waiting for me October 18.

I use Athlinks to keep track of my race results and compare them from year to year. It's so wonderful to have a website do this work for me. 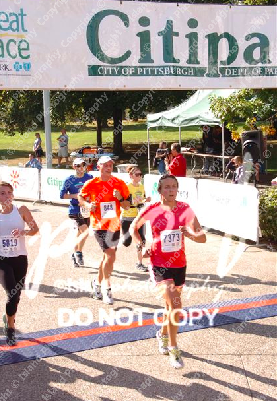 I'm already thinking about my 2015 calendar.

In January, I know I want to repeat the JCC Indoor Triathlon. I even invited Charlie Batch to try it with me this year.

In February I really want to do the Running out of Our Mines 5K.

I've formed a relay team for the DSG Pittsburgh Marathon in May and I'll do Riverview 5K in June. Will I ever go under 25 in that race?

July was a busy month for me this year in racing, so I will have to make some choices. If I'm swimming again I'd like to do the YMCA Butler Tri but I was thinking I could do the Sweet Sprint with my kids! At least the older ones.

August might be tricky, because I know my husband really wants to do the Run Around the Square, and I'll be ramping up for the Presque Isle Marathon in September.

I'll have to see how I feel after that race but I'd love to squeeze in some fun 5Ks in October, November and December.

When it comes to racing do you like to go big? Or go often?

Posted by Elizabeth Pagel-Hogan at 12:00 AM