Travel to Ireland with Kids - 2014 version

We are so lucky to have family in Ireland. And when a beloved aunt and uncle plan a celebration of their 50th wedding anniversary, we knew it was the perfect time to make a trip back to Ireland to see all of our family.

Our last trip to Ireland was in 2011 and the boys were very young. Our youngest and middle, while they had fun, had no memories of Ireland and our oldest had the uncomfortable memory of barfing on the streets of Cork. We assured him that wasn't likely to happen again and hopped on the plane to Shannon. 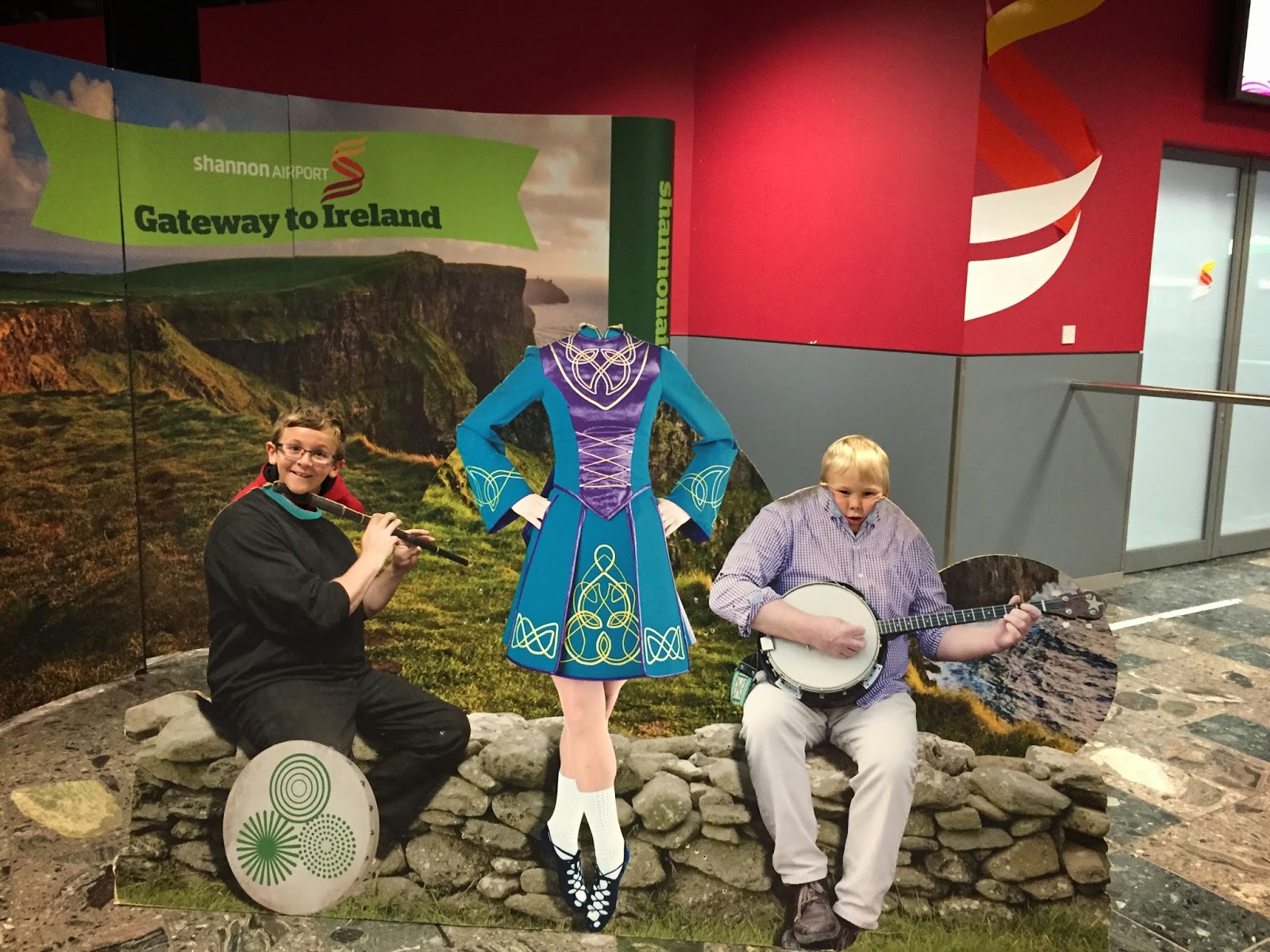 On the way over to Ireland, my middle son asked if we might just have fun and if I could not try to make them learn something on this trip. I told him I couldn't promise anything.

The high jinx began upon arrival. Despite their sleep deprivation (the flight over is a mere 5 hours) the boys were eager to start taking funny photos. 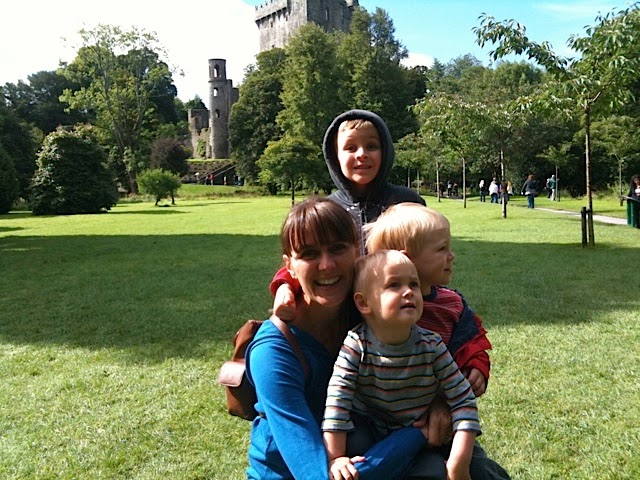 Here's a photo of the boys and myself at Blarney Castle in Blarney village, County Cork. This visit was in July 2011 and the castle was just crawling with tourists and visitors. The lines to get into the castle were staggering and in no way appropriate for a family with young children, so we skipped a climb and instead explored the grounds. 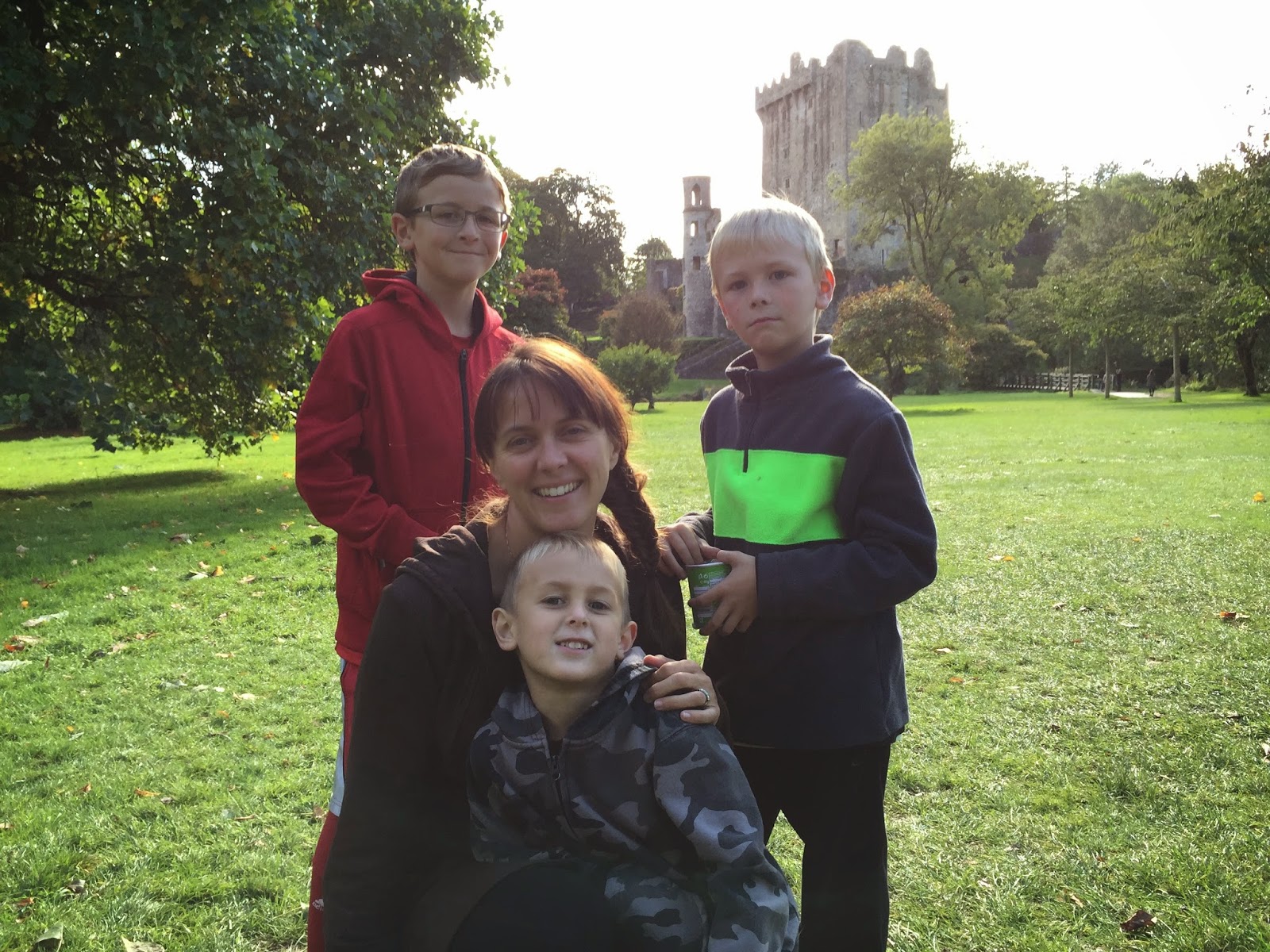 But in October 2014, the castle was almost deserted! So after waking everyone up from a quick nap we strolled over to the castle, grabbed a cup of tea and some snacks, and made our way into the castle. Things had really changed. Where my boys had run on grass straight up to the base of the castle a chain now blocked the area off. Badger's Cave, once dark and intimidating, was now lit with a bouncy little wooden walkway, wasn't as dark but still intimidating. And the castle was ours to explore. We wound our way up the steep stone stairs to the ramparts and gazed over the countryside. 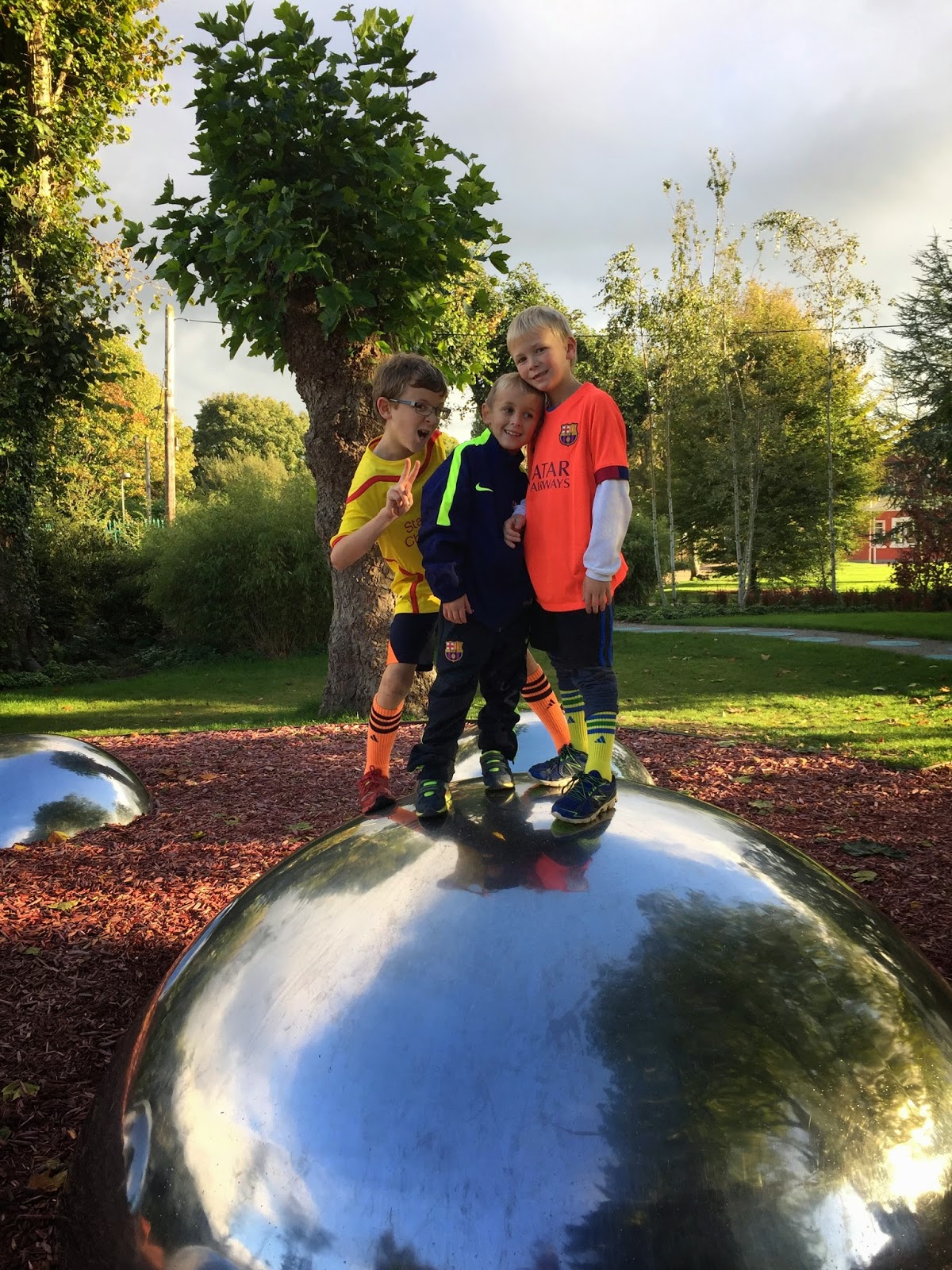 We stayed in Co. Cork for most of our visit and spent a lovely afternoon at Fitzgerald Park near UCC visiting my husband's cousin and his lovely wife and three daughters. The playground looked the same as when we were there in 2011, but my boys enjoyed it so much differently. While earlier they had been content on slides, see-saws and that spinning circle now all they wanted to do was kick the soccer ball that came as carry-on in a backpack or make themselves sick on the tire swing. Two of my boys were shy around their newly-met cousins, but one made friends rather quickly. One guess as to which boy made friends first.


By the time the party rolled around, there were unfamiliar faces every where. Introducing my children usually went something like, "This is my oldest son, he's nine, then my middle, age seven,…" etc. So after a few rounds of that, my middle soon took over and answered for himself and then followed up by asking adults THEIR names and how old THEY were. He's a delightful child.  My boys loved meeting and playing with all the cousins. 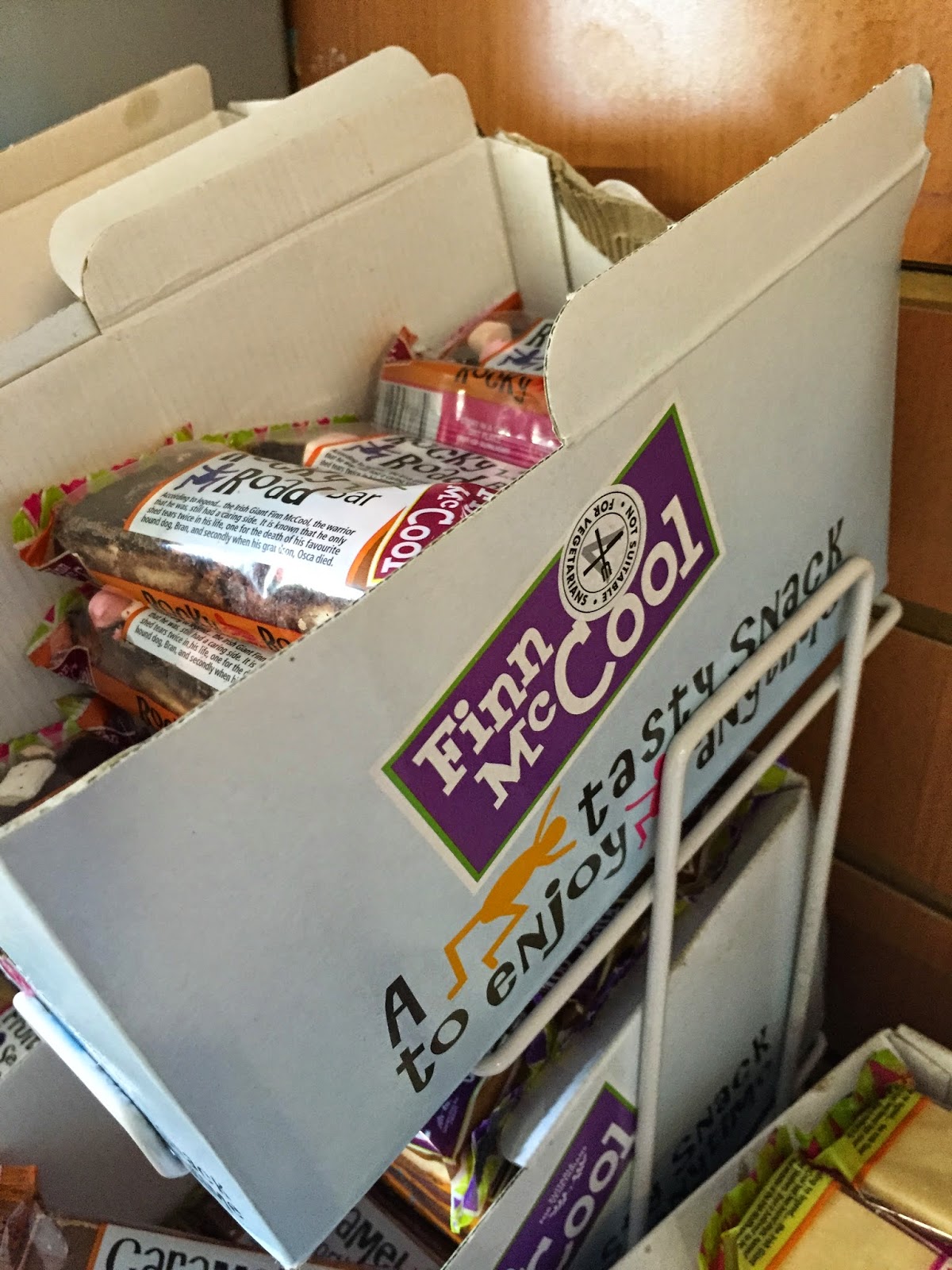 The Irish food agreed with them very much, especially the Pringles and candy found in every siopa, or shop. I had to remind them we weren't in Spain and they didn't have to call Fanta Lemon "Fanta Limon" anymore, but they couldn't break the habit. I was a little surprised to find Finn McCool bars. I didn't have one, but I did pick up a Wellington Square at a shop near Beal na Blath - where we squeezed in a little learning - and was not overly impressed. 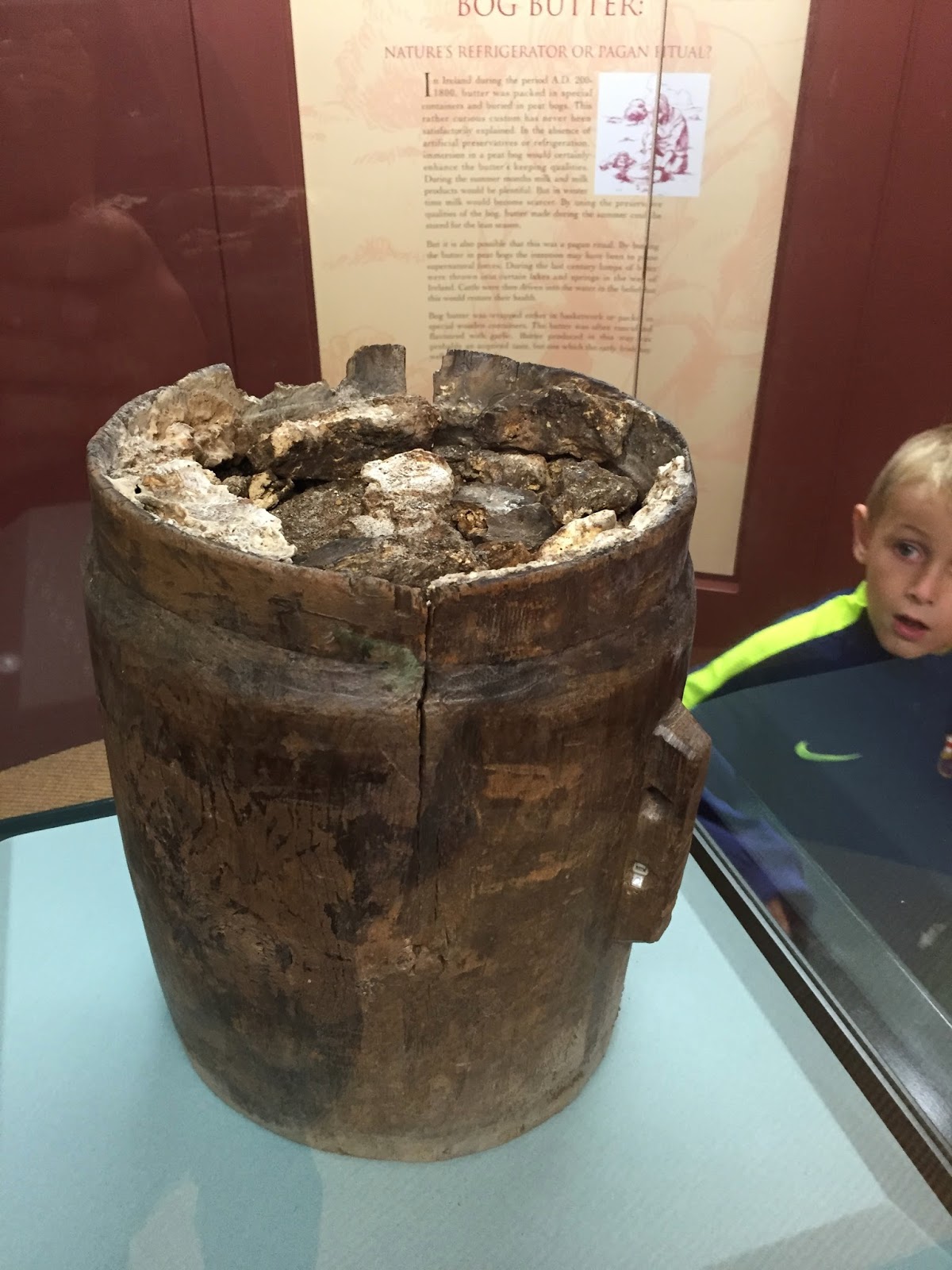 While in Cork City we did get a chance to cross something off my Irish bucket list - a visit to the Butter Museum! We squeezed in a little more learning at this museum near the famous Shandon Bells and where the butter market used to be. While it's a small little museum it tells the grand story of how Irish butter, once a small disorganized production system evolved into the massive globally recognized Kerrygold brand. I was incredibly impressed by that bit of history and also impressed by this thousand-year old crock of bog butter. They did not offer tastings at this time. 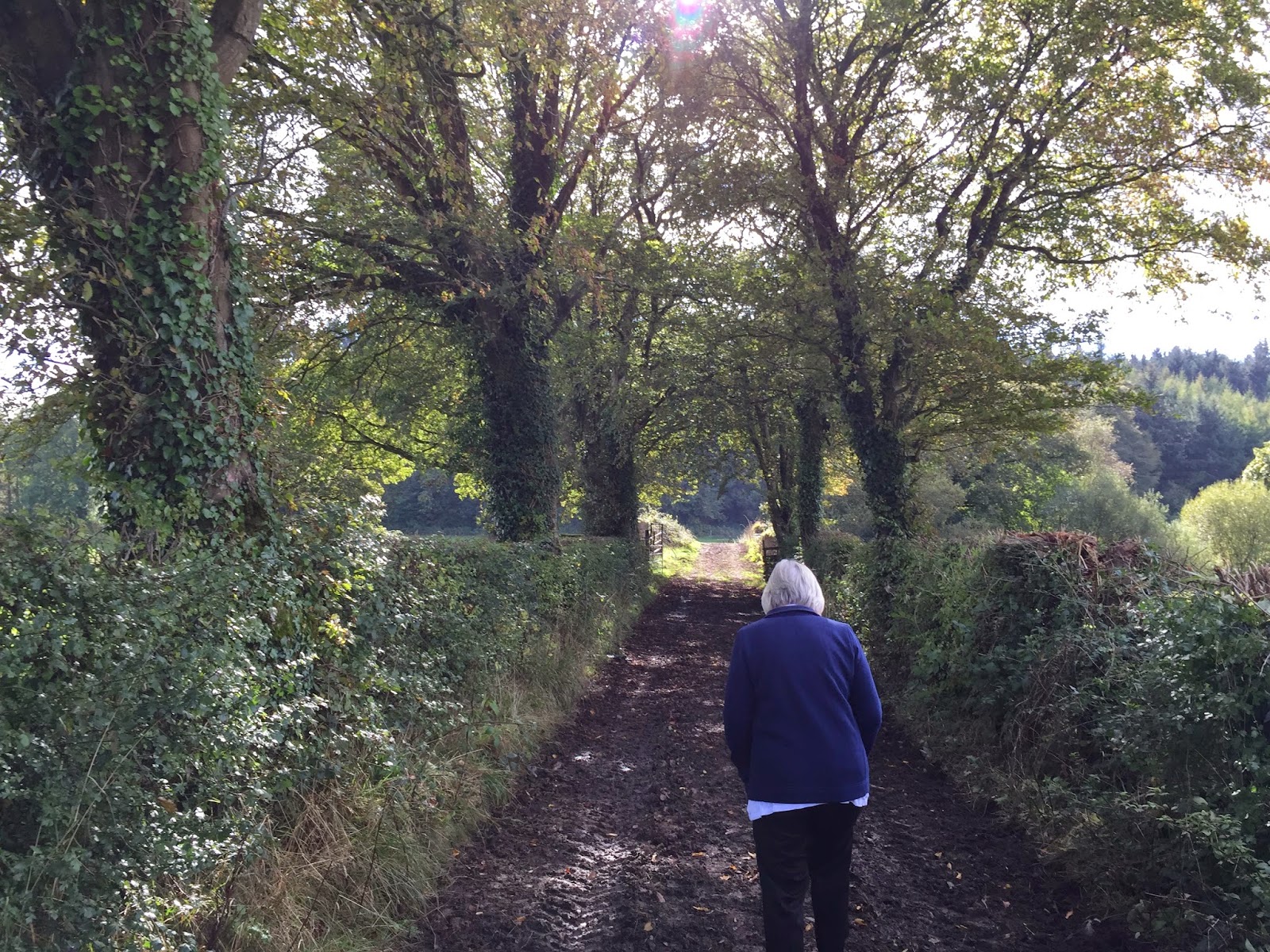 A highlight of this visit for me was the trip to Cloghroe, the small farm and pub that belonged to my mother-in-law's family for years. Her family doesn't own it anymore but we were permitted to walk the land and we visited Lady's Bridge where the train had once stopped. Now it's nothing but a dirt road, but the blackberries she picked with her brothers and sisters still grow there and still taste as good. This farm is the setting for a love story I've written and I was glad to see it for myself and discover small wonderful details to add to the story. 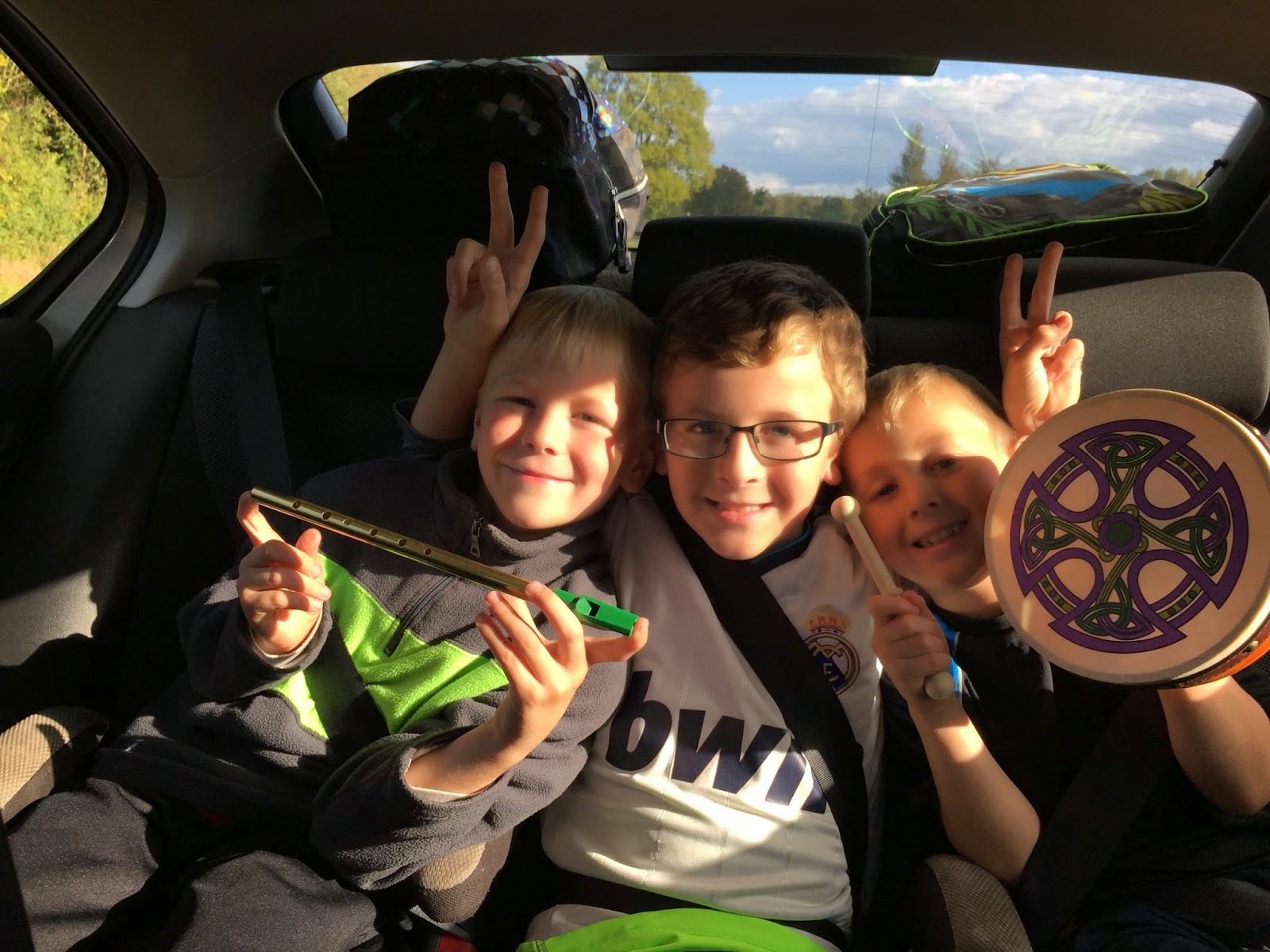 As for souvenirs, the boys were addicted to acquiring playing cards, called Match Attax,  featuring English Premier League players. Wherever we went they would sniff them out and the lovely Irish servers  at the hotel around the corner from where we stayed gave them tips on which ones to trade and not trade. The boys also got their hands on a bodhran and a whistle and formed their own band. They practiced their instruments for over an hour on the drive from Cork to Feakle, County Clare. 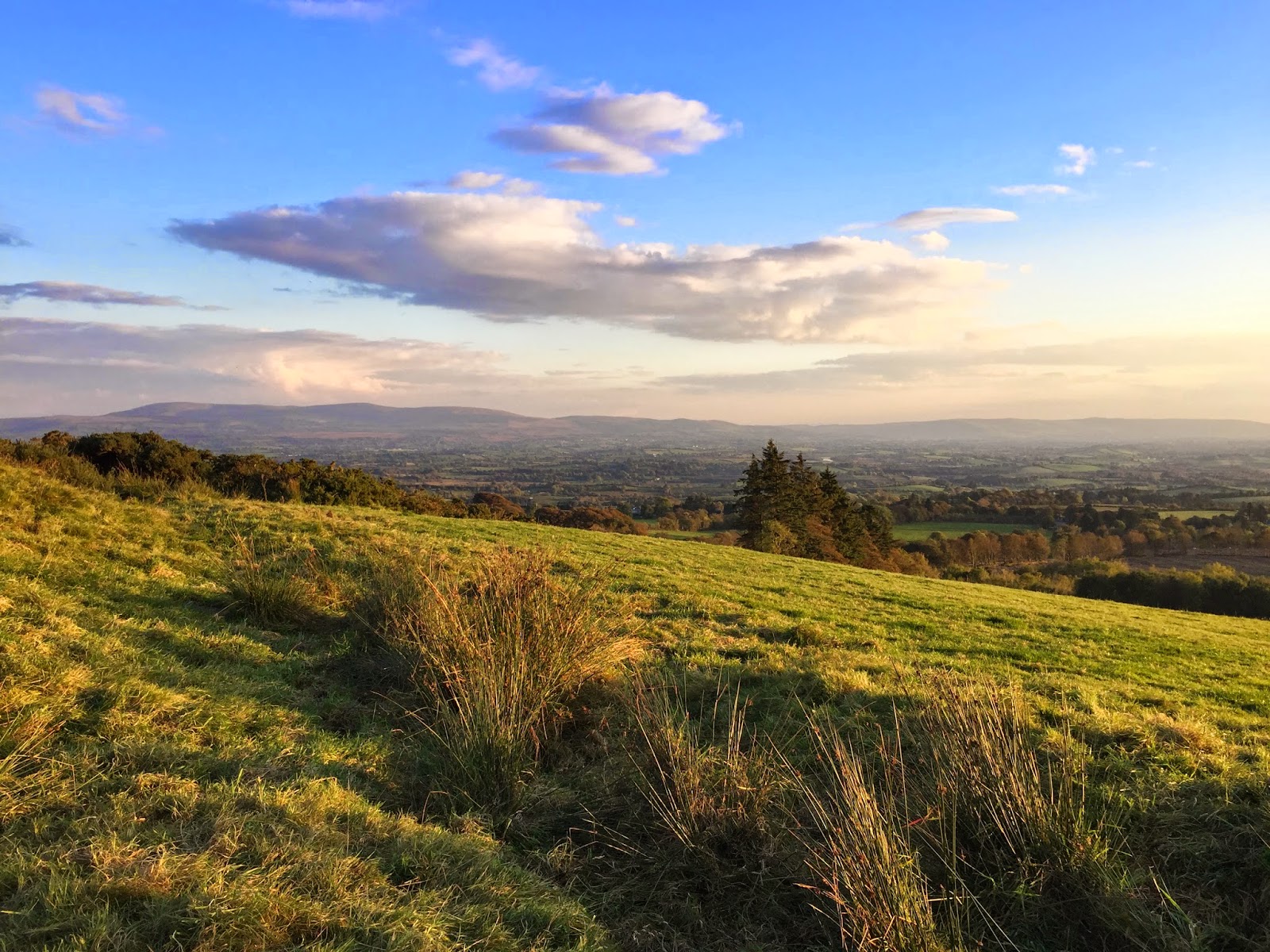 We capped off our whirlwind tour with a visit to a cousin's farm in County Clare. The children rode on a tractor and chased cows in a field. We all climbed a massive hill that gave us clear views of the river Shannon to our right and Lough Derg to our left. We traipsed through a pine forest so dense that light streamed through only at the trunks in straight, striking lines. It was an unforgettable evening that ended too soon.

Posted by Elizabeth Pagel-Hogan at 5:17 PM