Sometimes I ride the pumpkin crazy-train. I'm not buying Starbucks Pumpkin Spice Lattes but I did try the Chocolate Pumpkin Coffee at my local coffee shop, Coffee Buddha. I made some pumpkin spice cookies and roasted pumpkin seeds. And I devoured my friend's $20,000 pumpkin applesauce.

But after I saw this video from PureWow.com, I decided to try something really pumpkin: Pumpkin Soup cooked IN a pumpkin.


I'm not a great cook and recipes often frustrate me because they leave out important information, like saying it only takes 20 minutes to prepare while leaving out all the time it takes to chop zillions of vegetables. And I get so easily distracted. Cooking requires a feel for food that I just lack. But after watching this video I felt inspired! It seemed so easy!

(Spoiler Alert: I probably didn't make the best decisions for this project. Another reason the kitchen isn't where I shine.)

Last week my oldest was home for two days with pneumonia and I had to go to Walgreens to pick up some medicine for my son. And I saw they were selling pumpkins! And - get this - I already had a sliced leek in the fridge! It seemed like fate was telling me to make this soup. 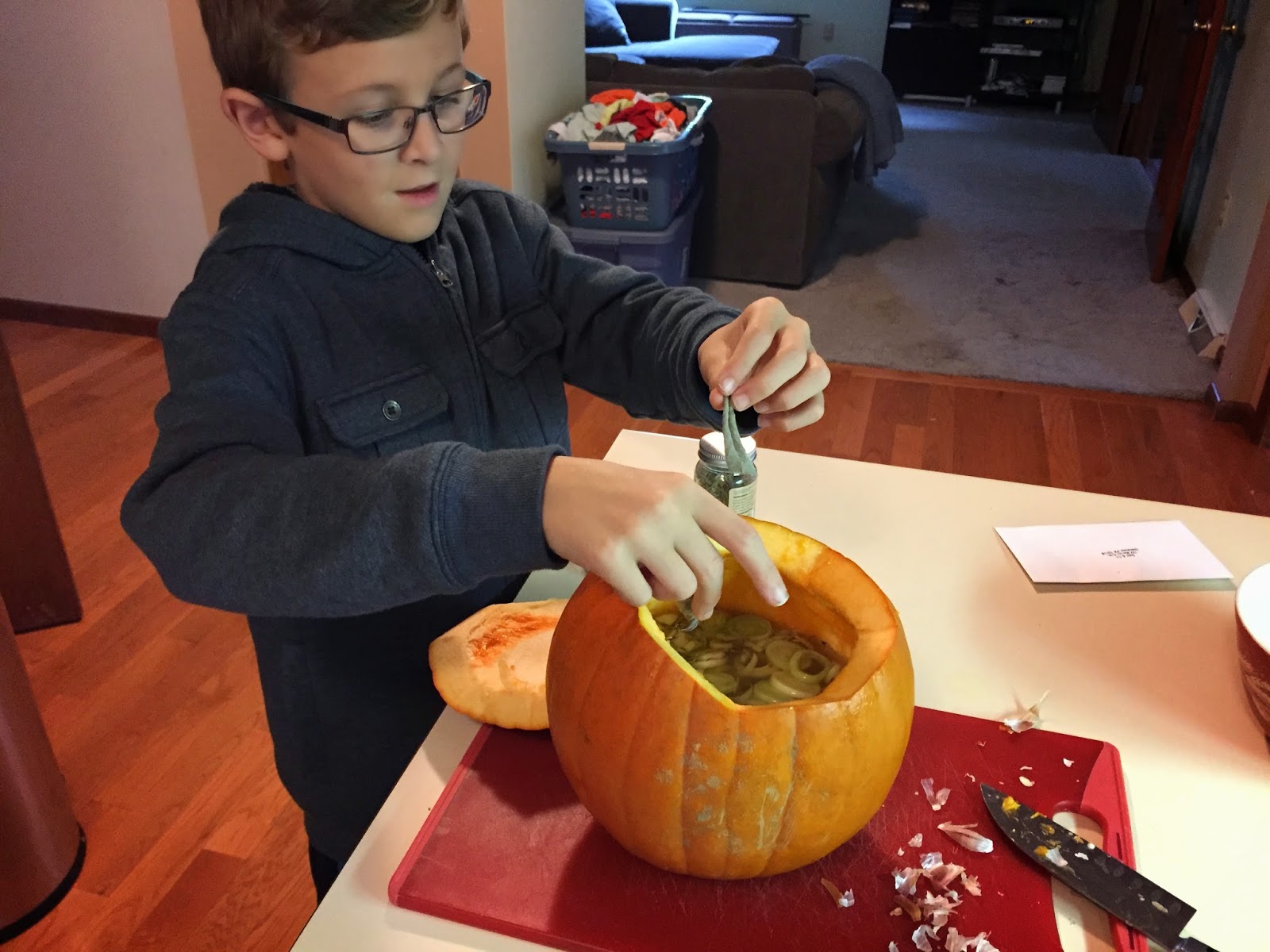 I don't know much about the different kinds of pumpkins, but the recipe (that I didn't read until later) mentions a "cake" pumpkin. The ones at Walgreens weren't labeled as specific pumpkins, but I grabbed one, took it home, and cleaned it out.

I gathered up the chicken stock, garlic, herbs, and pulled my pre-chopped leek out of the fridge.

Then we dumped in the ingredients just like the video described and popped the pumpkin in the oven.

Then we took it right back out because I forgot the parmesan cheese. 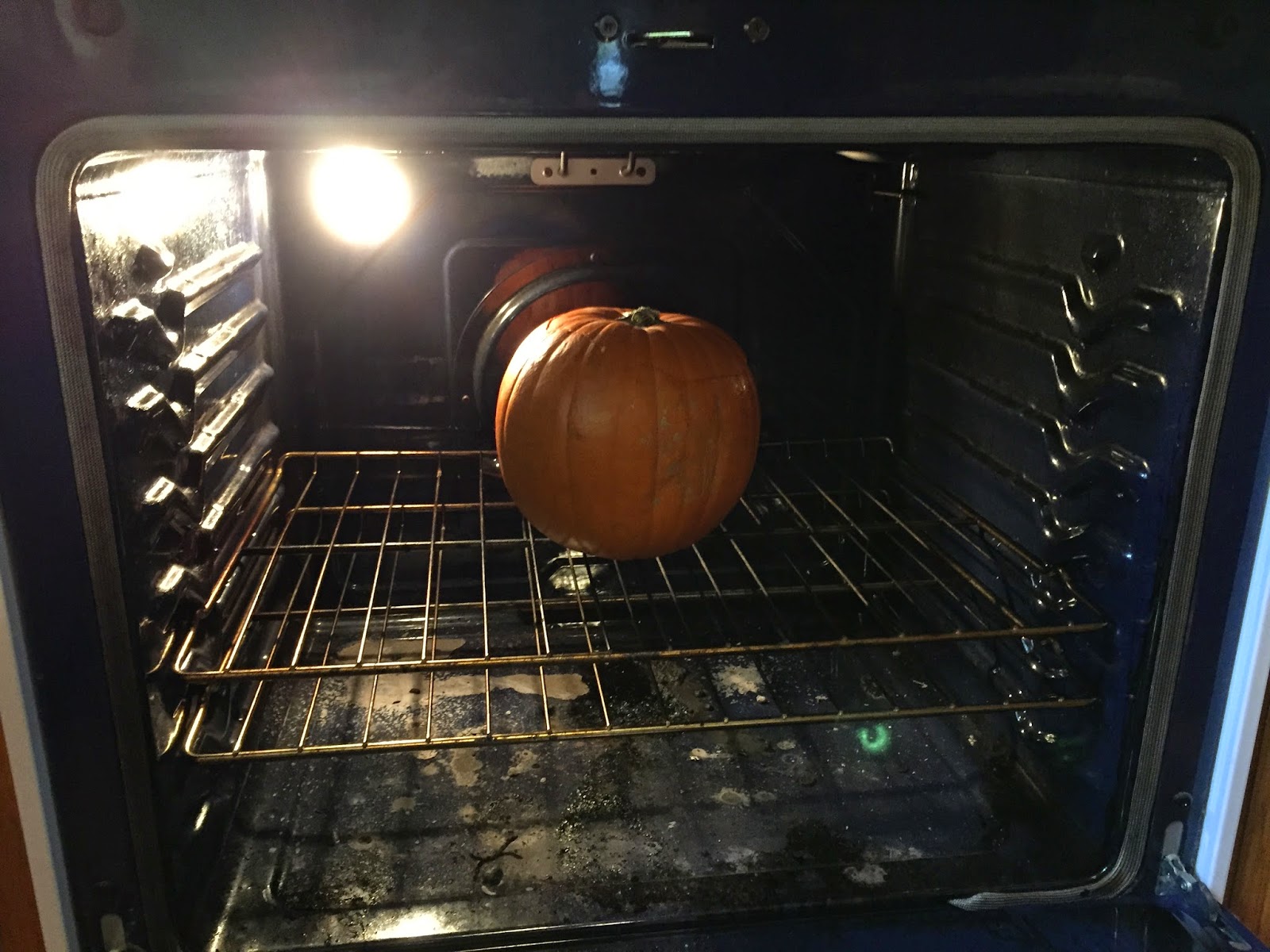 Then we put it back in, right on the rack. Later, when I read the recipe they describe putting it on a baking sheet, but that key detail was left out of the video. 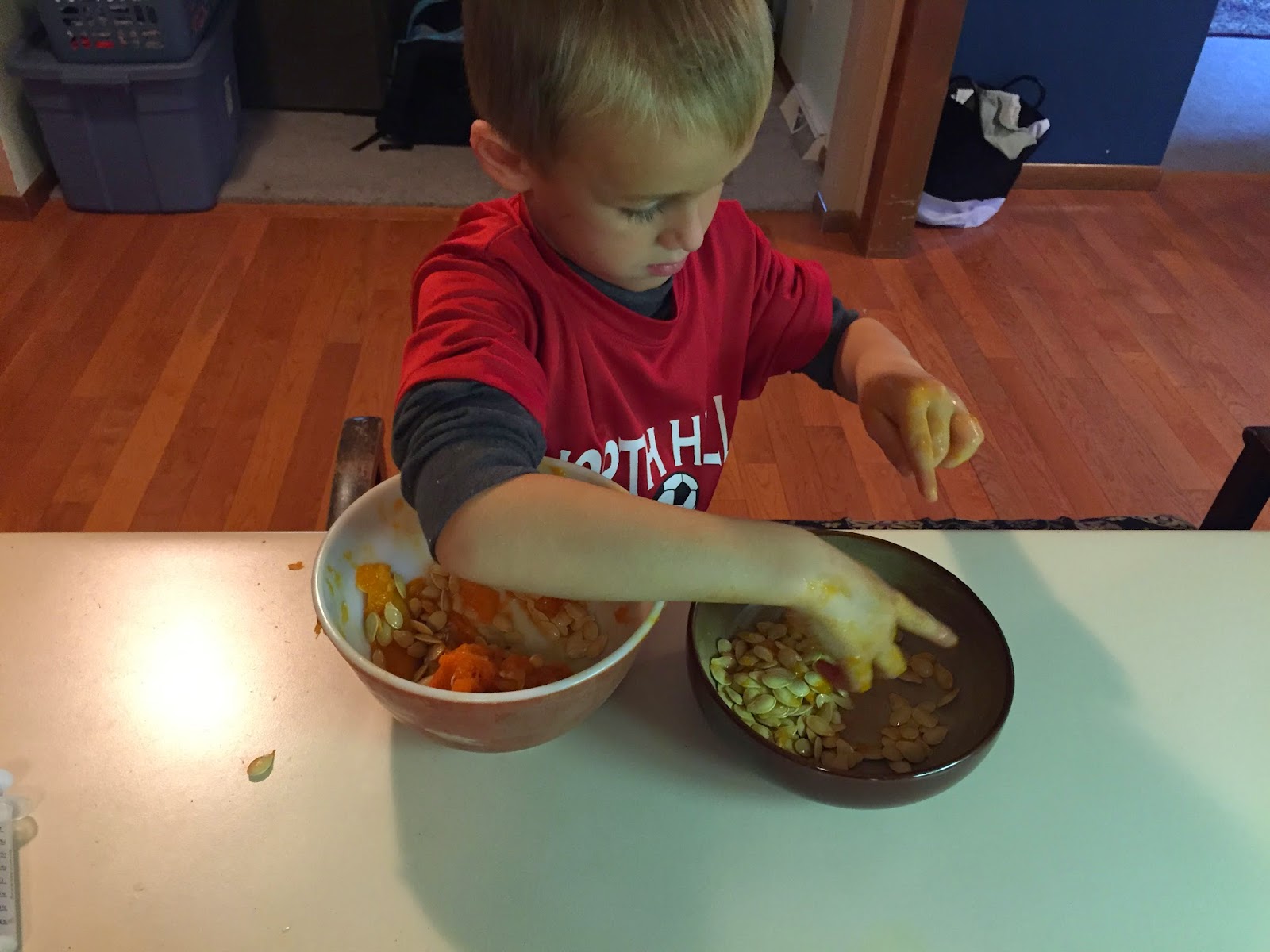 While the pumpkin soup was cooking, I let my four-year old explore pumpkin guts. He also eventually sorted out the seeds for me. Later, after the pumpkin soup was out of the oven, I roasted them to dry them out but forgot the important step of rinsing them first, so they were sort of burnt. I ate a few anyway, out of defiance. They were still pretty good with butter and salt and small bits of burnt pumpkin flesh.


As the soup cooked, the house was filled with this incredible aroma. Everyone thought it smelled good. The kids were actually getting excited to try this soup. But then I opened the oven and they got their first look at the pumpkin. They were devastated. Kids eat with their eyes SO MUCH that this shriveled, burnt, diseased looking pumpkin outweighed their olfactory senses and turned them right off to this dinner. Also, I couldn't get the pumpkin off the rack, so I had to drag the entire rack out of the oven and put it on our cooktop. 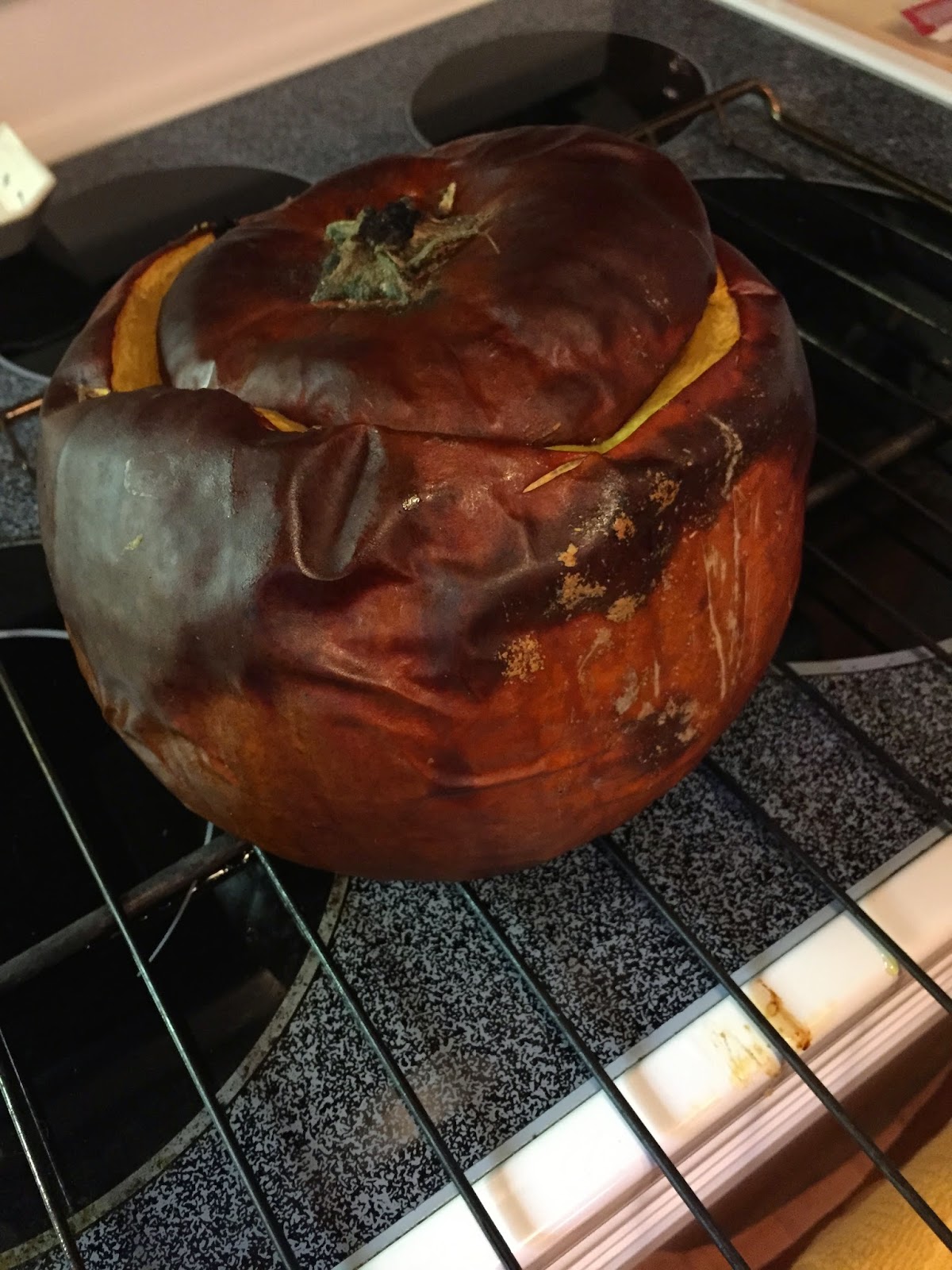 Inside the pumpkin, the soup still smelled amazing. Luckily I can see past the exterior and find the beauty inside things. As I scooped the soup out of the pumpkin, two of my kids became interested in trying the soup again, but the middle child had long abandoned any hope of eating this dinner and was buried up to his midsection in the pantry looking for goldfish crackers.
I scraped out as much pumpkin flesh as possible and then served three cups of pumpkin soup with croutons. The reactions were varied: My youngest loved the croutons soaked in broth, topped with more parmesan cheese. My oldest cried when he saw it and said he didn't think he could eat it. I ate it but didn't enjoy chewing the leeks and the pumpkin flesh wasn't that smooth. I actually had to bite into it, which I didn't expect. My middle son and my husband never even gave it a chance. 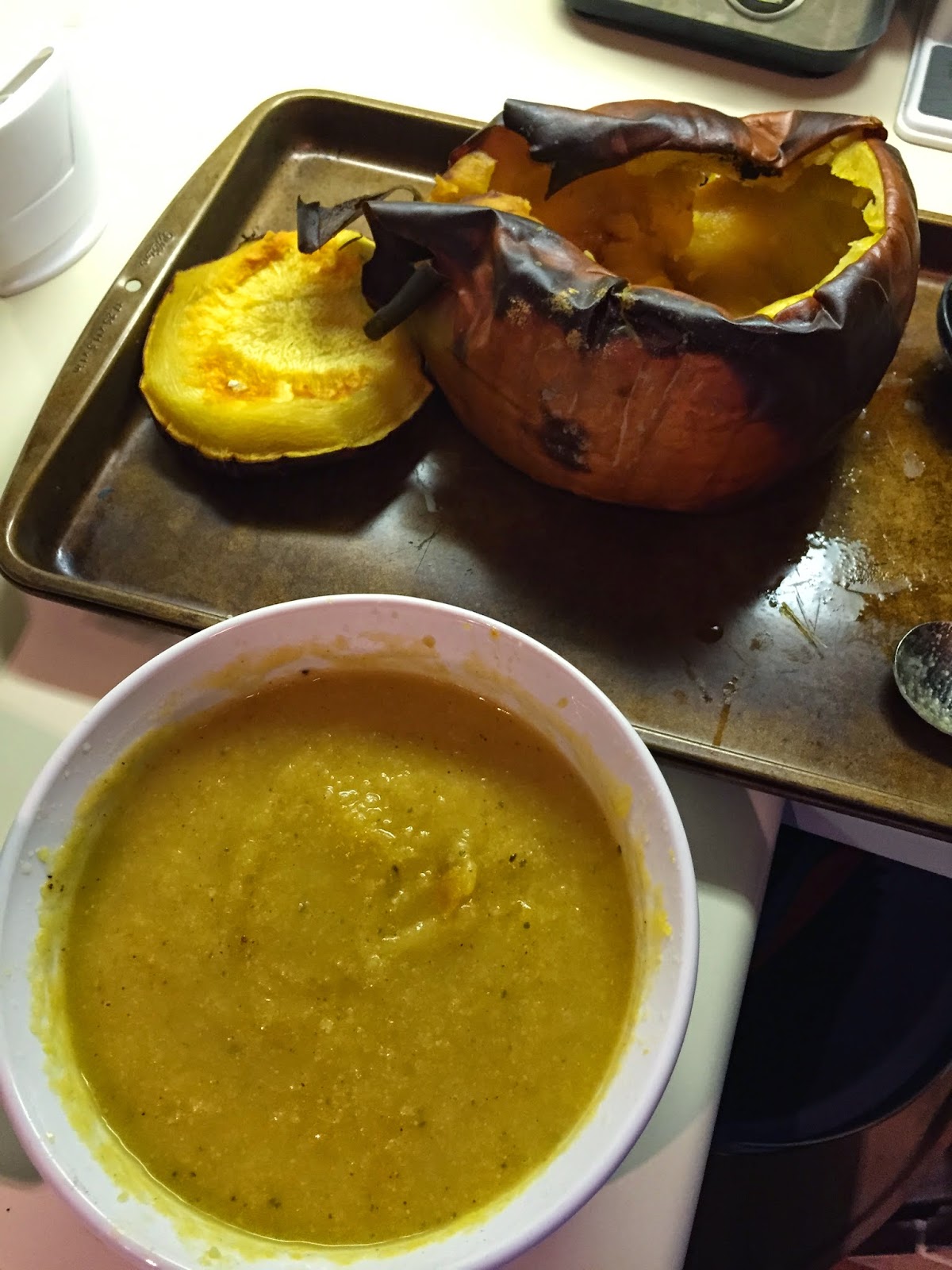 After dinner, I decided to modify the results and creamed all the ingredients together. I also added some chili powder to give it little more spice. I had it for a few more meals but couldn't finish this quantity of soup on my own. I don't know how much of this recipe depended on the kind of pumpkin used. Maybe I didn't cook it enough to soften the flesh but I did cook it enough to burn the outside. If I did this again I might cook it longer at a lower temp.

Yet again, I learned that there are some instinctive qualities that go into making one an excellent cook and that I probably just don't have those. But that doesn't stop me from trying!

If you make this soup and it's a raging success, let me know what you did differently. And give me some.
Posted by Elizabeth Pagel-Hogan at 12:17 PM