Does Alternative Medicine Work? (or Set my Qi Free!) 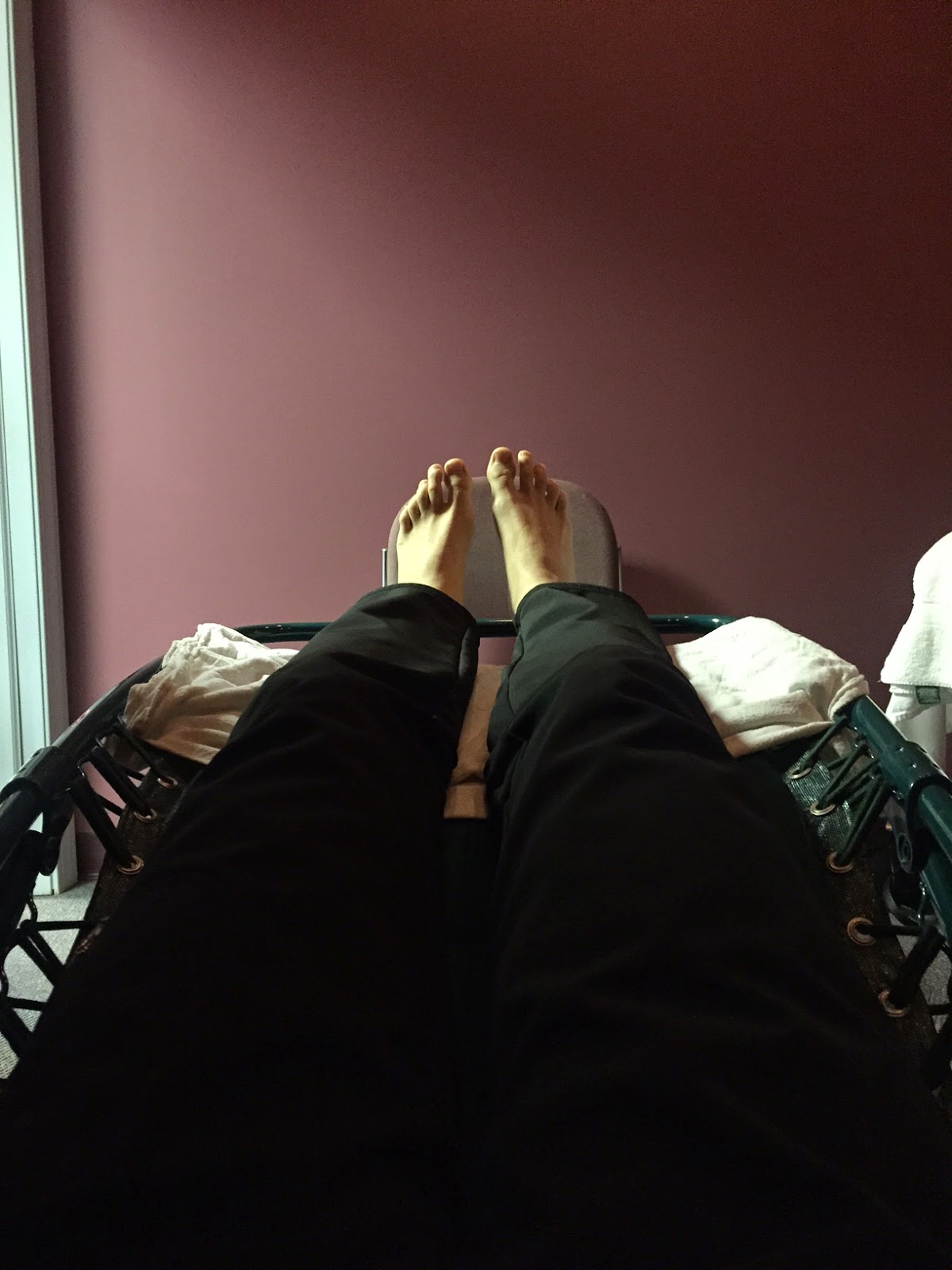 I'm all for trying new things. I feel like there's something to be learned from many, many experiences.   But what about alternative medicine?

I'm in training for the Credit Union Cherry Blossom Ten Mile Run and so far I'm on track for a great race. But even more important to me than my finish time is raising money for Children's Miracle Network Hospitals. People I love very much have received wonderful care from these hospitals, so I ask you to help me raise money to ensure all children get the care they need. Give a miracle.

Recently my left hip, IT band and quad have started giving me some grief, and the achy pain extended into my lower back. I'd like to blame my children for this but I've had IT band troubles since high school. Luckily my leg didn't hurt when I ran or rode my bike but it hurt a lot when I laid on my left side in bed, and it often hurt when I was sitting at my desk.

I considered my options.

I could visit my sports medicine doc. He's a cool dude. He knows better than to tell me "stop running." He would happily give me a referral physical therapy and remind me not to run on cambered roads and that I need to build up strength in my gluteus and hips.

Since I knew what the sports med doc would offer, I decided to try something new for this pain. I went way out there. I scheduled an appointment for two different kinds of alternative medicine.

I scheduled my first appointment was for a reflexology session at a nearby gym then I crossed my fingers. (Trusting luck seemed about as reasonable as my other decisions.)

I told my husband about these appointments and he quite reasonably asked what reflexology was. I had to admit honestly that I had no real idea. I looked it up online and clicked on the Wikipedia entry where I read:


The Reflexology Association of Canada defines reflexology as:
"A natural healing art based on the principle that there are reflexes in the feet, hands and ears and their referral areas within zone related areas, which correspond to every part, gland and organ of the body. Through application of pressure on these reflexes without the use of tools, crèmes or lotions, the feet being the primary area of application, reflexology relieves tension, improves circulation and helps promote the natural function of the related areas of the body."[7]

So far it sounded like a massage, except without oil or lotion. Then I kept reading.


Reflexologists posit that the blockage of an energy field, invisible life force, or Qi, can prevent healing.[3] Another tenet of reflexology is the belief that practitioners can relieve stress and pain in other parts of the body through the manipulation of the feet. One claimed explanation is that the pressure received in the feet may send signals that 'balance' the nervous system or release chemicals such as endorphins that reduce stress and pain.[8]These hypotheses are rejected by the general medical community, who cite a lack of scientific evidence and the well-tested germ theory of disease.[4]

Was my Qi blocked? I'm probably a little off balance when it comes to most things, but I believe whole-heartedly in the germ theory of disease so I didn't have high hopes that reflexology would help my hip and leg feel better. But I like to keep an open mind so I went to the appointment anyway. And guess what? She used lotion! Right away that made me doubt she was really a reflexologist. Was she a fake practitioner of a fake procedure?? Did the two fakes cancel each other out to make a real treatment? It was very confusing.

Overall the reflexology appointment was pretty relaxing but just as I expected, I didn't really feel different. What I wasn't expecting was the surprise addition of some Reiki therapy. At least, she said it was Reiki, but she may have just been tired of touching my feet.

After reflexology, I headed to my spin class. Probably not the best scheduling I've ever done. Spin went great and then I had to rush to my next unusual treatment appointment: myofascial release!

I decided to try myofascial release on the recommendation of friend who visited them before. She really wished I could visit her favorite acupuncturist in Taiwan, but the Southside of Pittsburgh would have to do. As with reflexology, I knew nothing about myofascial release but did not look it up in advance. So there I was, heading into the wild unknown, not knowing if I would be drinking tea that would turn me blue or stretched on the rack or punched in the face. I bet being punched in the face would take my mind off my leg.

The myofascial release appointment was painful. Very, very painful. A rather casually dressed fellow pressed his bony fingers and elbows and forearms into all the really painful parts of my legs and hips. There were signs all over his office reminding me to "breathe" which I tried to do in between yelps and complaints.  I believe he was trying to activate my trigger points but I did not really listen because I was so mad him and his bony arms.

As I lay there, it dawned on me that it was called "alternative medicine" because as he dug into the muscles in my legs and back they alternately burned and ached. And I also remembered that there is a link between the words "fascia" and fascists. And fascists like pain.

After the treatment he had me run through some familiar stretches. Fine, fine, I know all about stretching. But I couldn't wait to get back to my van and look up myofascial release. Good old Wikipedia.

I like it when my blood and lymphatic fluid circulated. So far so good. Then I read:


In 2011, the UK Advertising Standards Authority ruled that there was inadequate scientific evidence that myofascial release was effective for any condition.[11]

The Advertising Standards Authority ruled this? What about doctors? Medical journals? And now who do I believe? Advertisers? Or myofascial therapists?

I really would like to know if you use alternative medicine and if you find it effective. I'm trying to keep an open mind, but maybe I'm not alternative enough. Maybe I've gone mainstream!

I've had two myofasical treatments now and I can't tell that it's doing anything. Is this just a modern version of bloodletting? Is "activating trigger points" as effective as "balancing the humors?" Is my Qi still blocked? How do I set it free?