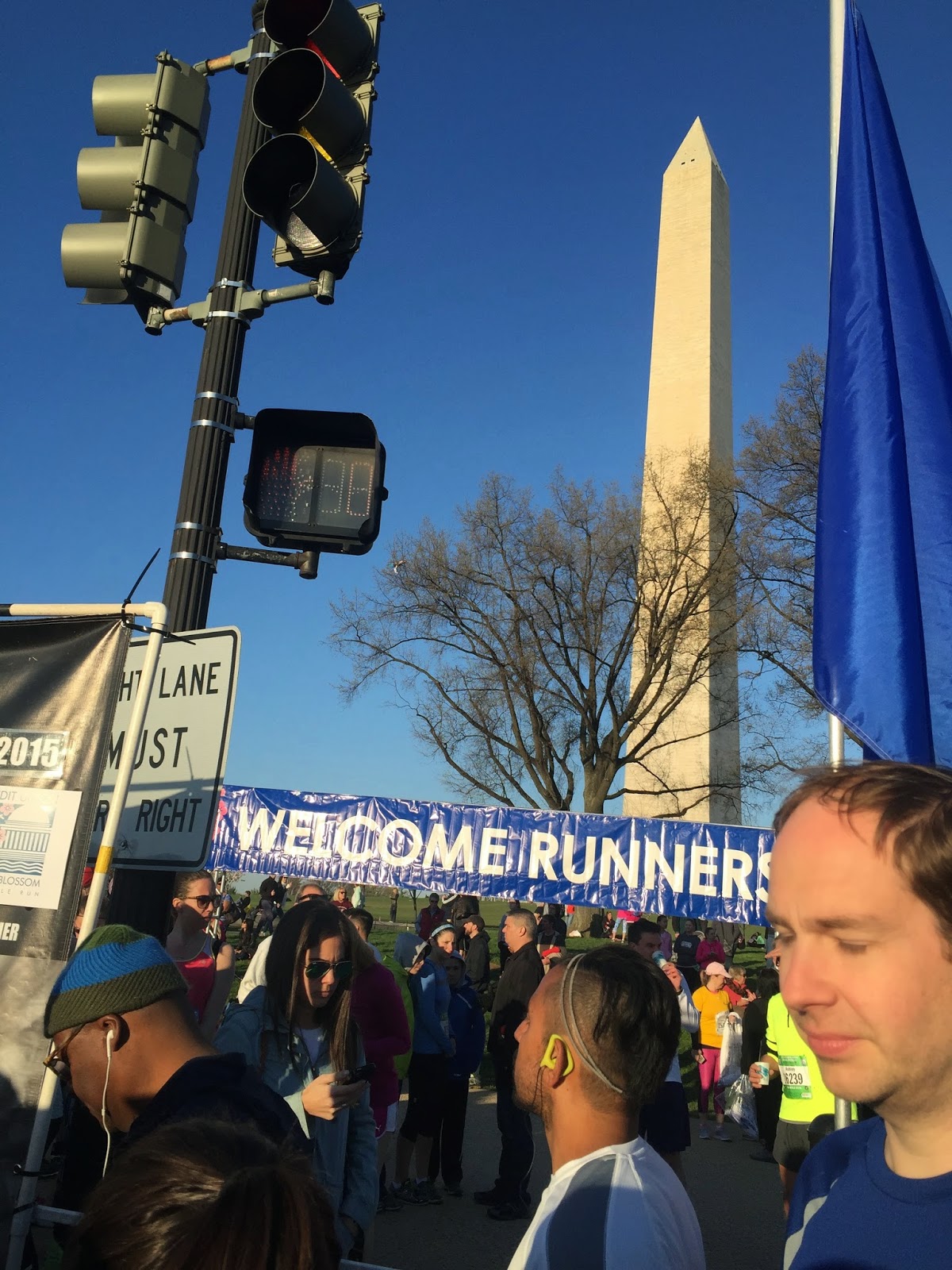 This year's Cherry Blossom race is done! I've been thinking about it for a long time and now that it's come and gone I admit I'm missing it already. Things were a bit of a blur on race weekend. We had two events for my middle son, a soccer game and sleep over for my older son, a four hour drive down and back, the pre-race dinner and a lot of rushing around. I wasn't sleeping that great leading up to the race, and things didn't go as I planned on race day. But I have a lot to be grateful for and I'm a natural optimist. So here are ten great things about the Credit Union Cherry Blossom Ten Mile Run.

1. The start line. I lined up injury-free this year. That hasn't happened in awhile and I counted myself very lucky to be there. Especially after learning that there was an accident impacting the original route and that we would have to run a half-mile less, I took a moment to follow my coach's advice and be grateful for my own safety and the chance to be able to start this race. 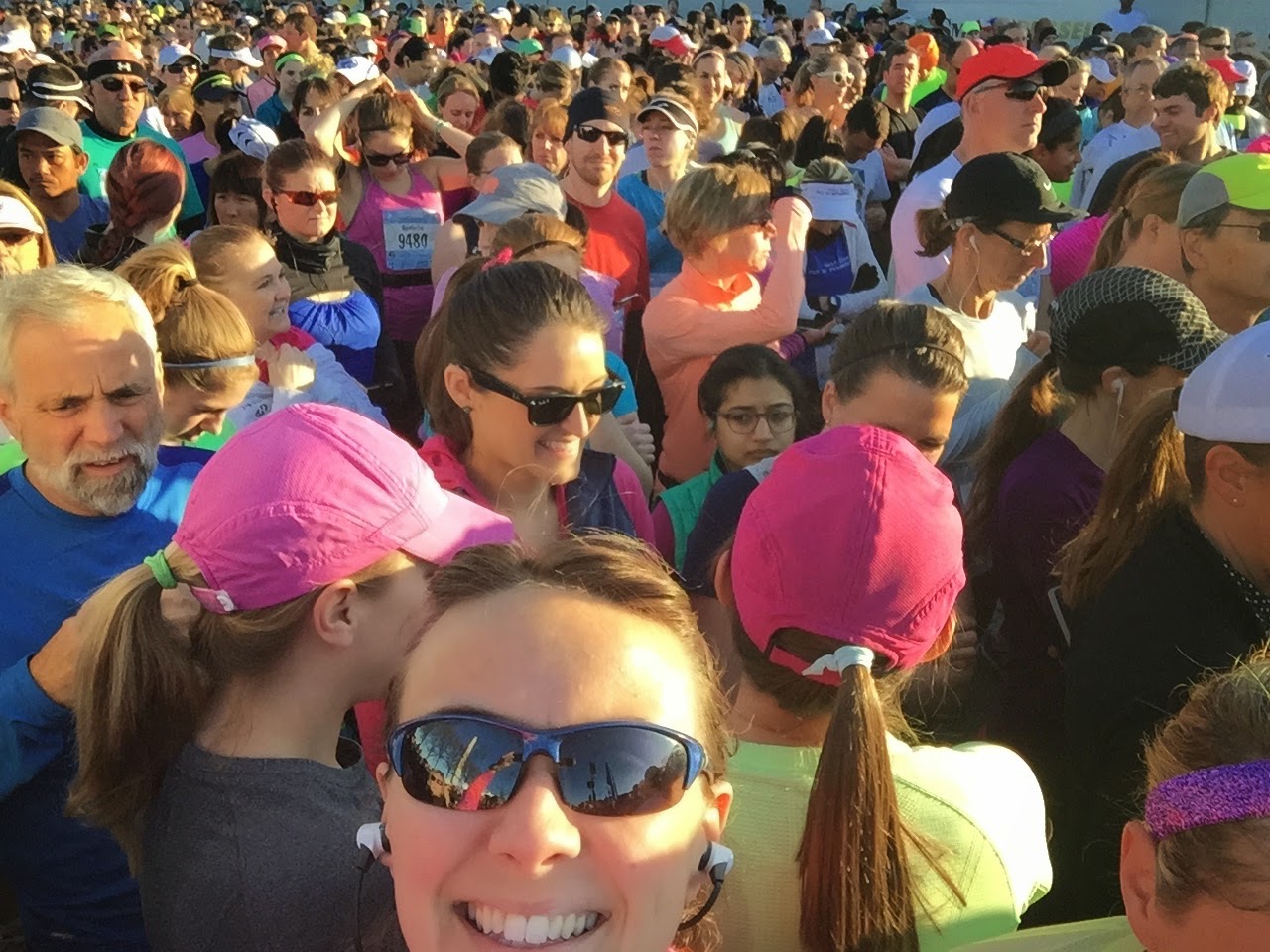 2. Blossoms. For the first time in eight years, the blossoms were in bloom during this year's race. I remember standing on the starting line and trying to imagine what it would be like to run under the trees in bloom instead of "in twig." It was gorgeous. Incredibly, satisfyingly gorgeous. Turning down into Haines Point was like turning into a tunnel of spring glory. 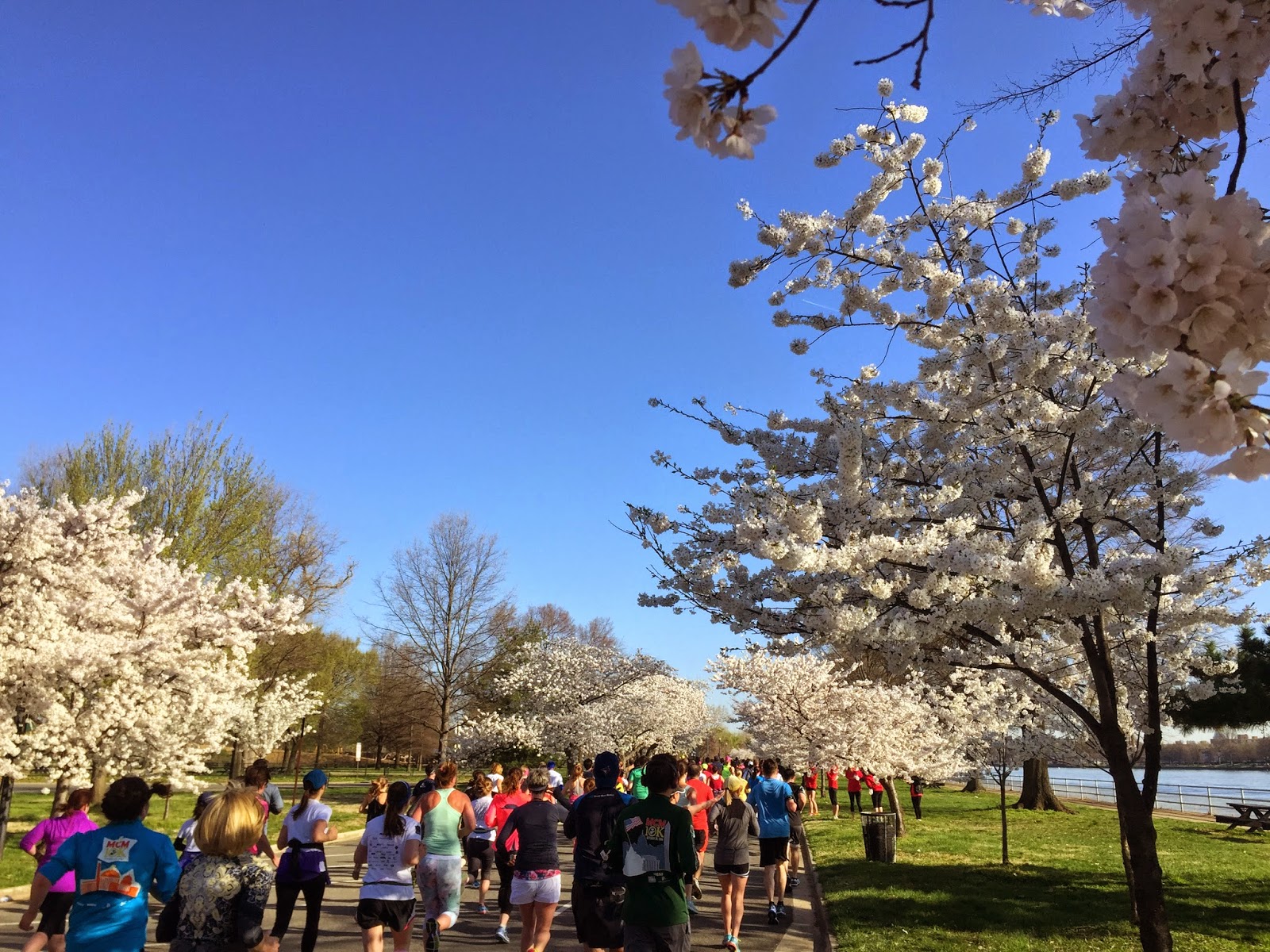 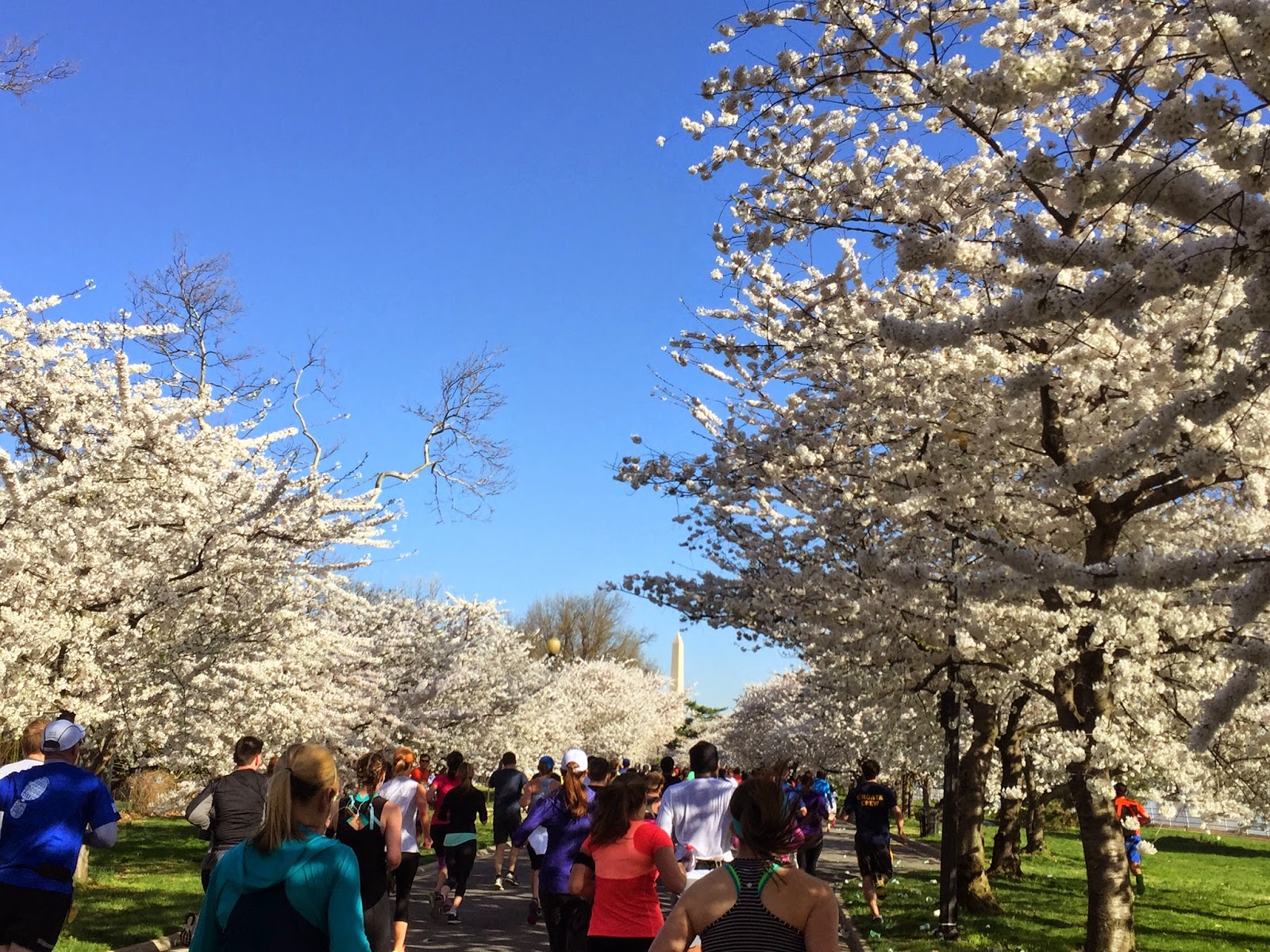 3. The bright side. The weather was perfect. After an icy, grey winter I couldn't ask for a better race day weather forecast. About halfway through the race I remember seeing the sun sparkle on the Potomac and being so grateful for spring. At just about that point in the race, things started to get a little tough for me. My lower back started to ache. My stomach felt off. My cadence fell off and my mental attitude slipped from positive to negative. I was not going to make my goal finish time. But around the 8 mile mark I made a decision to focus on the bright side. I was healthy. I was going to finish. So I paused and took some photos so I could remember and focus on the bright side.

4. Signage. I wish I could have taken photos of my favorite signs during the race, but I'm not that quick on the draw. I'd like to say very kindly that we're all done with the "this is a lot of work for the free banana" sign and anything featuring Ryan Gosling. But I want to give props to the signs that made me laugh. Near the finish I saw one that said "I thought they said RUM" and that actually made me laugh out loud despite my frustration. Another good one featured Dory from Finding Nemo. No, not "Just keep running." This one said, "I'm never doing another race. Oh, look! A race!" Runners do that for realz. Going under some bridges I spotted one that said "Keep smiling and perspiring" and while the rhyme was a little forced but I actually did smile.

5. Strength. Sunday morning my husband and I slipped our neon green anklets on to remember some special loved ones as we ran. It takes a lot of strength to train during cold winters. It takes strength to get out there and challenge yourself to run ten miles. People we love very much have had to be strong and our anklets were a reminder to think about them when things got tough during the race. 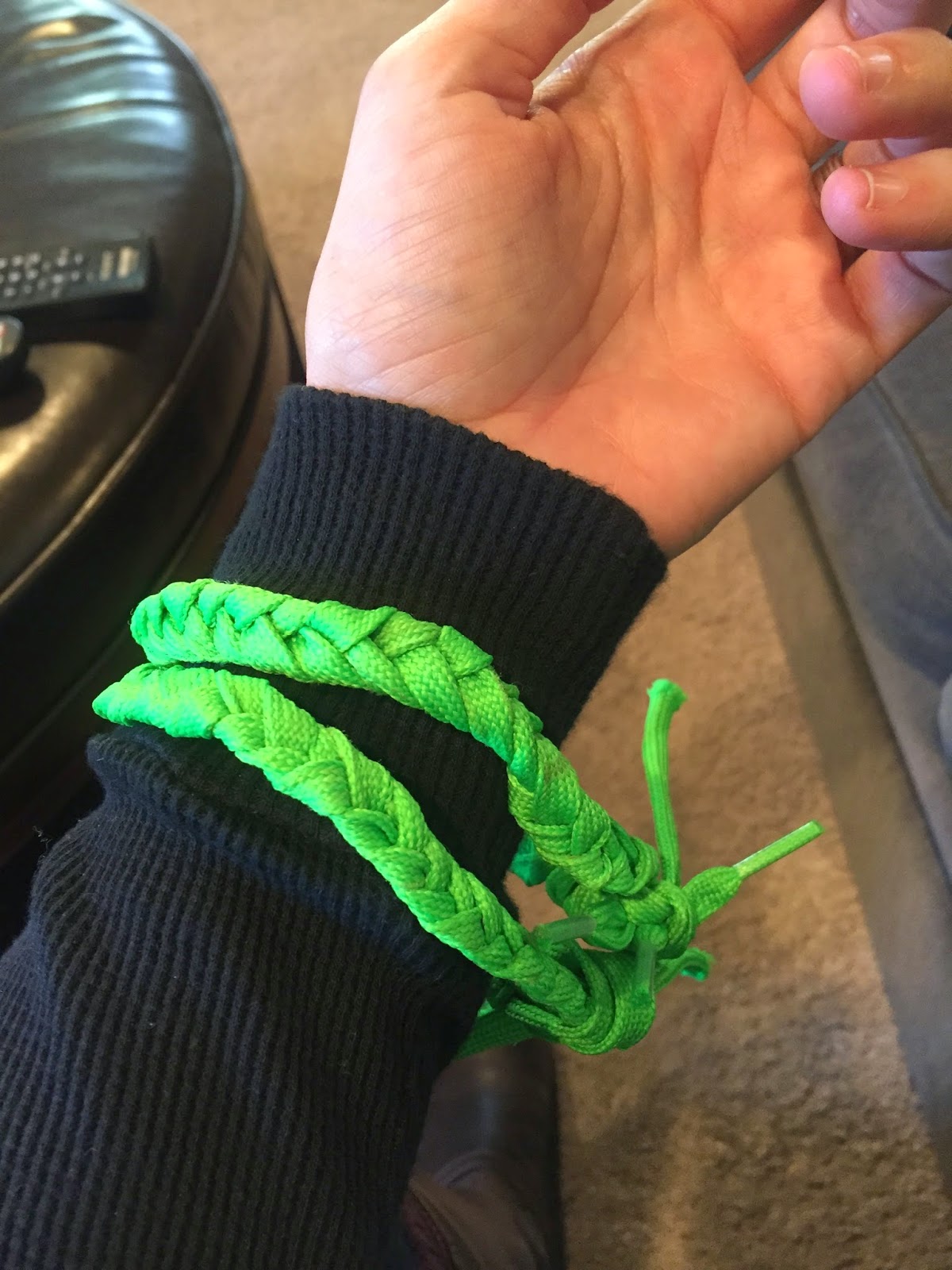 6. Inspiration. As the blog editor, I'm so fortunate to be able to attend the pre-race dinner. I was extra lucky this year to snag a photo with Joan Benoit Samuelson. Talk about inspiring! She won gold in the first ever Olympic Women's Marathon. 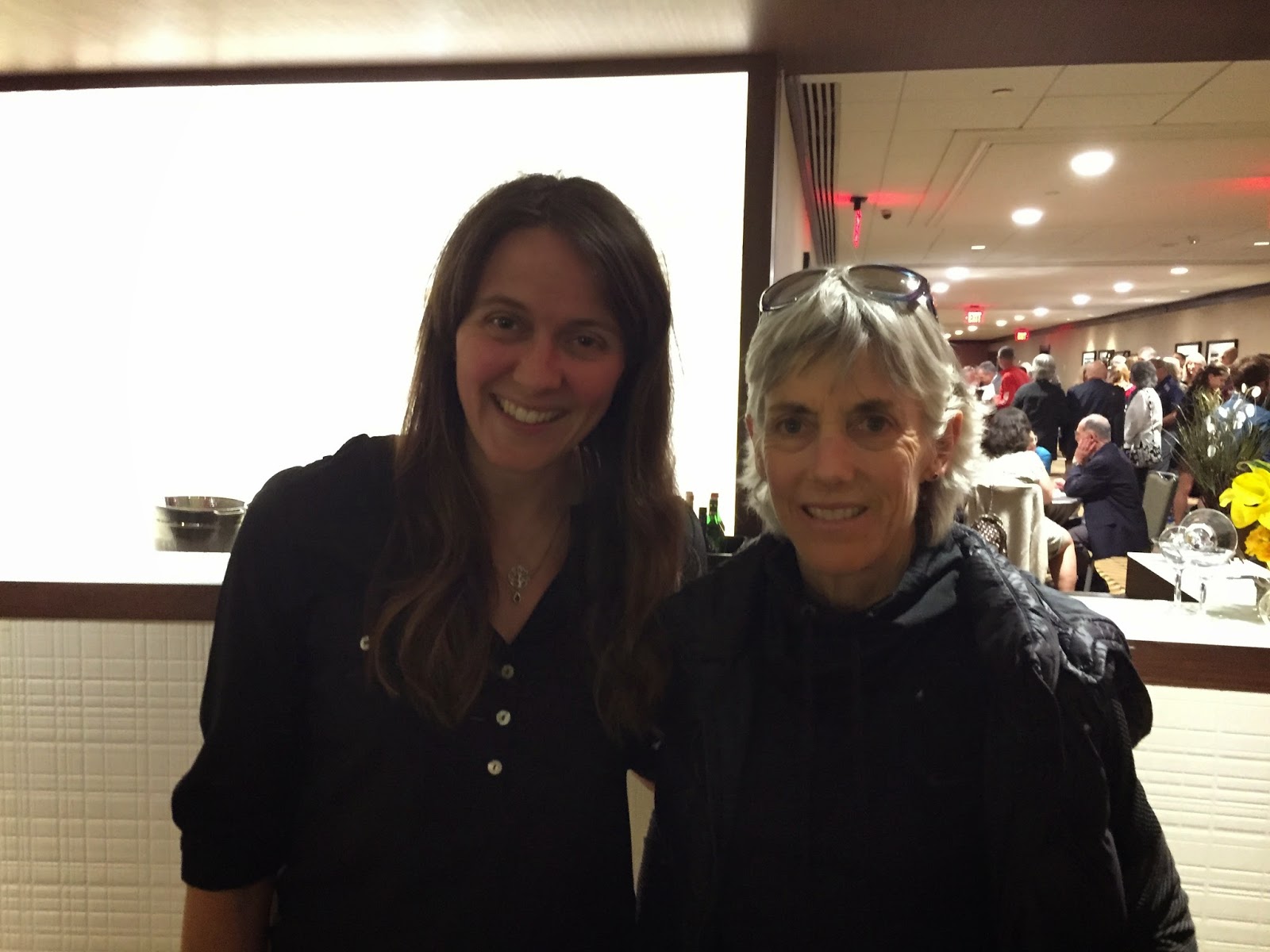 7. Friends. The first five miles of the race went as planned, but by midway I knew I was off pace to finish like I wanted. It's always a good strategy to have more than one goal so that when the race is done you can celebrate some aspect of your hard work. I admit I got pretty frustrated that I wasn't going to make my running goal. But then I thought about my fundraising goal to support Children's Miracle Network Hospitals and how so many amazing friends and family members helped me not only reach but beat that goal. I was overwhelmed with gratitude. That feeling helped me keep moving and cross the line. 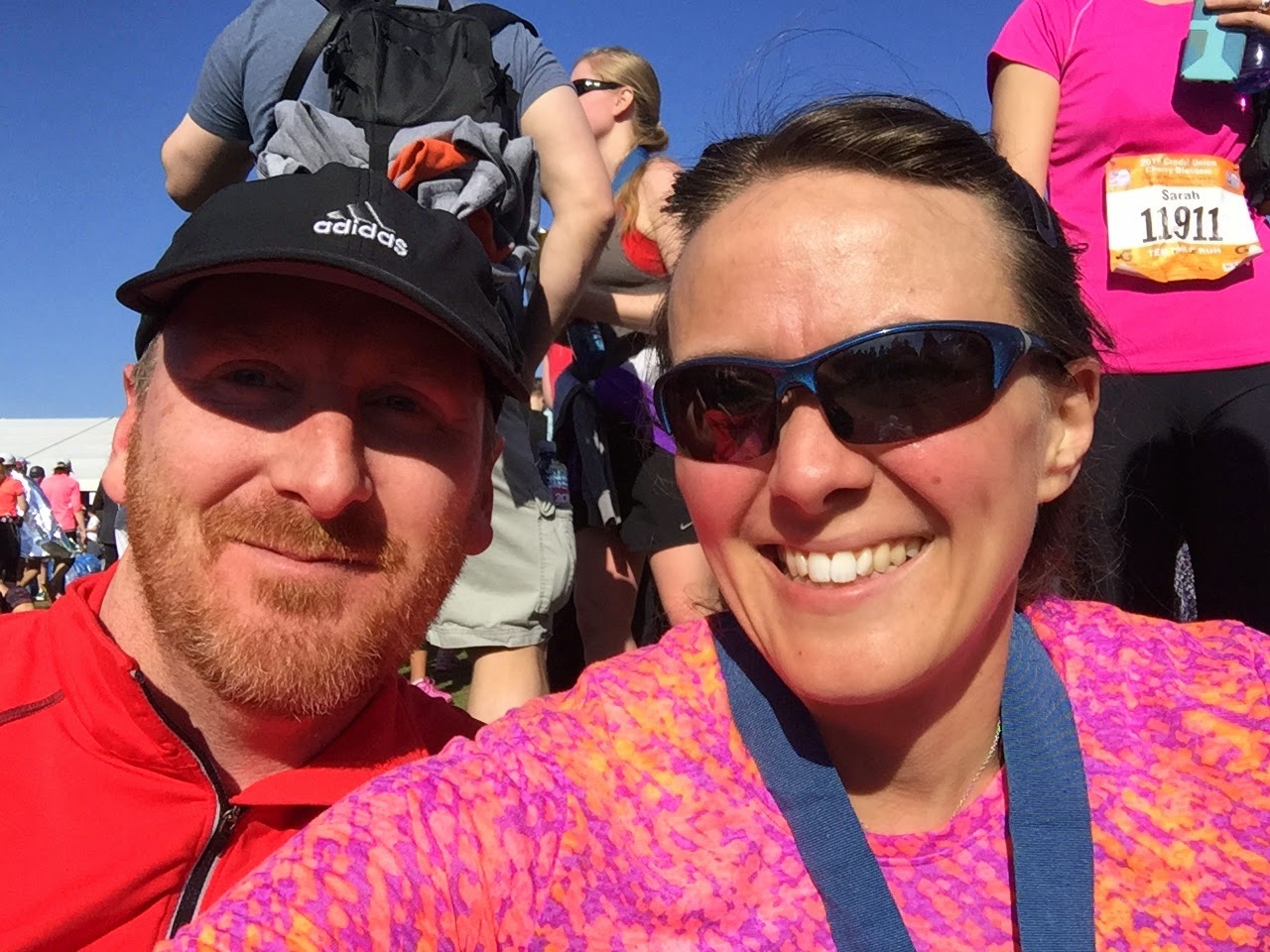 8. Family. I think about my family a lot when I'm running and my family played a big role in my race. Family took care of my two youngest so my husband and I could race. I wore my green anklet to remember how strong my family is and how much we love each other. And my kids inspired me, too, especially my middle. He performed on stage in his first talent show Saturday morning. He told us that climbing the stairs to the stage he was nervous and his legs were shaking, but he got up there and did his routine. I was so proud to hear how he handled his fear. That same morning, my middle son played his first soccer game of the season and lost 15-0. It was humiliating and a terribly muddy game. My son cried and cried, but he kept playing. Seeing his success in the talent show and his struggles on the soccer field were really important to me during the toughest moments of my race.

9. Those drummers. Right by mile 9, drumming their hearts out. If you've run this race (or other big DC races) you know who I mean. I almost cried when I heard those pounding beats. How do those women manage to fill wordless drumbeats with encouragement and support? It's magic.

10. The finish line. I'll admit I was happy to see it! I knew I'd get there. And I knew I wouldn't cross the finish line alone. My husband didn't have a flawless race either. In fact, we both struggled. But the best part about being married to him is knowing that we support each other when things are going great and when things aren't going the way we planned. It's pretty amazing to be married to your best friend who agrees to a crazy weekend and drive four hours to run a ten mile race when he's honestly been too busy to put in any real training. It stinks that he can still kick my butt in any race, but I think could take him in a spelling bee. But it's not a competition. It's a celebration. 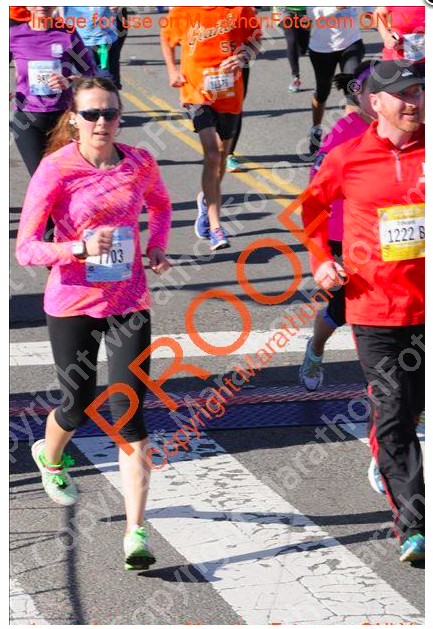 Posted by Elizabeth Pagel-Hogan at 2:36 PM