Making friends can be so hard for kids, but stepping back and letting my children navigate the trenches of childhood friendship can be even harder. I want them to build friendships with families who are different from ours and learn the world is made up of people who believe many different things.

Some people believe it’s fine to have a gun in their home. But seven children die every day from gun violence in this country and many times those deaths happen because gun owners think their children know gun safety. They think somehow the gun is keeping them safe when it is really putting their family and loved ones at risk.

I don't stop my kids from playing with kids who have guns in the home, but my husband and I don't let my kids play at those homes. And my children know this rule.

We gave this decision serious consideration. Were we panicking? Were we setting down a path that would make our children and our family social outcasts? What if they stopped getting invitations to birthday parties? What if people avoided us at the playground? Certainly some families would take offense to our decision, but we knew that the safety of our children was more important to us than being popular in the neighborhood.

But what else might happen by me asking? What if some other parents start asking? What if we start talking about it at the playground? At the PTO? And why do some stores allow people to carry loaded weapons but not allow me to take photos (Yes, I was actually told I couldn’t take photos in the store). What if we stop thinking it’s OK when people carry loaded weapons into grocery stores, churches, parks, malls, coffee shops, and family restaurants?

My children know I’m an advocate and volunteer with Moms Demand Action for Gun Sense in America. They were so young when the massacre at Sandy Hook happened, I only discussed it in general terms and described how a very sad, angry boy had made a horrible choice to use guns to hurt people. I told them I was going to work hard to change the way people had access to guns in our country. 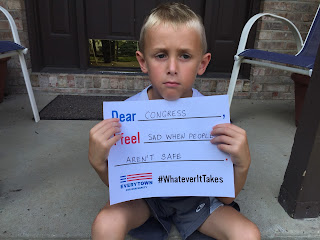 As I learned more about the serious public health issue that guns represent in our society, my husband and I also decided that we would no longer allow our children to play at homes if there were guns in the home.

We started asking whenever our kids received an invitation for playdates or sleepovers. I developed a system of asking that tucked the question about guns into less sensitive topics. I’d say, “hey, my son is excited to come over, but I wanted to ask if you had any pets, if anyone in the house smokes, or if you have any guns?”

It was easy.  Parents would tell me I was smart to ask and that they were going to start asking. I didn’t have to say no to playdates. Two years passed and my volunteering with Moms was powerful and positive. I involved my children in the boycotts of Starbucks and Target and we celebrated when those national corporations chose customer safety as their first priority.

Then the massacre at Charleston happened. My children were older now, and I felt they needed to know more. Talking about Charleston with my three children was painful and uncomfortable but absolutely necessary. What scared them most was that this time it happened in a church. I told them honestly that gun violence is still threatening the peace and safety of our lives. But I also told them honestly I am working hard to change the way our nation views guns.

The same week that nine people lost their lives due to gun violence, I declined two invitations for my children because the families let me know they had guns in their homes.

Saying no to playdates when there are guns in the home is just one way I’m trying to reduce gun violence. It’s a part of raising awareness of the issue, like wearing orange and sharing articles on Facebook. But I’m also taking action to enact change by boycotting companies and asking my elected officials to close background check loopholes. And I’m teaching my children that their lives are more important than a possession that is only designed to hurt and kill. 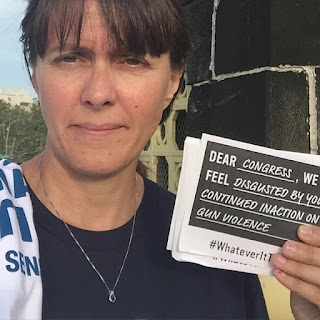 Posted by Elizabeth Pagel-Hogan at 10:41 AM