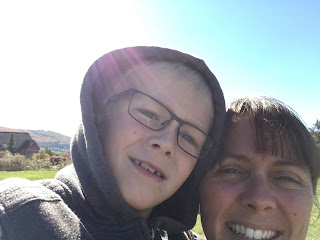 The middle guy got glasses!

His older brother has had glasses for years, and at every eye doctor appointment the middle one has begged for glasses for himself. Last year he even tried to trick the eye doctor about his vision. It was pretty funny, but the eye doctor told me he was right on the edge on needed them.

So this year as we drove to the appointment, he started up again hoping he would need them. As he hopped into the chair and started reading the charts it quickly became clear he wasn't able to read the letters. And when Dr. Kohen told me (delightedly) that he needed glasses, he burst into tears!

The middle guy wasn't thrilled. I think it was fear of the unknown. What would it be like wearing
glasses? What would people say?

"How original," I replied and rolled my (LASIK-focused) eyes. In the rearview mirror I saw him moving his lips and was sure he was practicing to use those words at school.

He said he wouldn't tell anyone but he's no good at keeping secrets so when he got off the bus everyone knew.

A week went by and the glasses were ready. My husband and I handed them to him and he put them on in the van as we headed out on a road trip.

And he was astonished. Amazed. His first words were so familiar to my husband and I who have both worn glasses for years: "I can see every leaf on the trees!"

He was even thrilled to copy a character from my (unpublished) novel who pushes his glasses up on his nose.

Then something really big happened. He told us he could read the GPS from the backseat.
This was an incredible discovery for everyone. Because we finally realized he wasn't asking "how much longer" for all of our trips to be annoying. He just couldn't see! We were all seriously delighted by this and the trip was filled with his happy exclamations of how fast the trip was going. In fact, we were all very happy and grateful for the glasses.

And he's not crying anymore. He was scared about the glasses because they were a big change for how he saw and how he saw himself.

"I have to get used to my new shadow," he told me. "Now there is a rectangular edge where my glasses stick out."

He's already adjusting to a new version of himself.

He wore them to school this week, and honestly I think he was a little disappointed. Everyone called him "handsome" and "smart"and he didn't get to use his comeback.
Posted by Elizabeth Pagel-Hogan at 8:56 AM