How to Help Kids Say Sorry, Forgive and Forget

**Update! It's been a month since I published this post. Over the past weekend, my oldest got pretty angry with us and was rude and sarcastic. He also failed to listen several times until my husband yelled at him. It took my oldest some time, but he finally came up with a meaningful, heartfelt apology, and he said it out loud. He told me later he felt better after apologizing. I think we're moving in the right direction!

Some people are naturally very good at apologizing, I think. It's part of their personality, like being shy or talkative, messy or organized. My youngest is the best at apologizing in our family, my husband and me included! (I don't know if my husband will like to read that, but I think it's true.) When my youngest gets angry, frustrated or hurt and yells at people, it doesn't take long for him to seek the person out and hug, cry a little, and say he's sorry. It's too hard to resist and the person he's apologizing to inevitably accepts the apology right away.

My other boys could use a little work on both delivering and accepting apologies. But my oldest isn't great at putting his feelings into words. That's why I started encouraging him to write his apologies down and hand them to people. 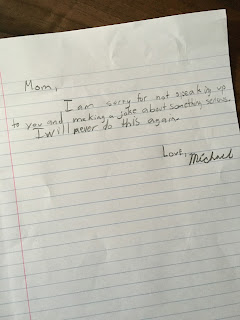 This has been working out very well. He gets to take a break away from the explosive situation and put his thoughts on paper. The person who receives his apology doesn't have to listen to a mumble or a whisper or a sarcastic tone. In this case, when I read his letter, I calmed down a lot and really felt it was genuine. I know a short letter like this doesn't really have a tone but I knew it was authentic.

For the middle son, we're working on helping him forgive and accept the apologies he's receiving. His favorite phrase is "sorry doesn't fix it." Even when the person really means it! I think my middle son gets a little bit of his grudge holding from me because I do have a hard time forgiving and forgetting. The difference is, I know I have this problem and I am trying really hard to work on it. But my middle son likes to revel in being the victim. He's a little theatrical.

I haven't yet stumbled upon a way to help my middle son accept real apologies. And I'm really looking for advice.  It's true, sorry doesn't fix everything. But being able to forgive is a crucial life skill. I don't believe one can go around carrying the burdens of grudges and slights and wrongs throughout life and be happy and healthy.

Forgiveness comes with empathy, I think. So how does one build empathy? And what helps you accept an apology?

Posted by Elizabeth Pagel-Hogan at 12:41 PM

Email ThisBlogThis!Share to TwitterShare to FacebookShare to Pinterest
Labels: Ask My Kids, Being Boys, Family