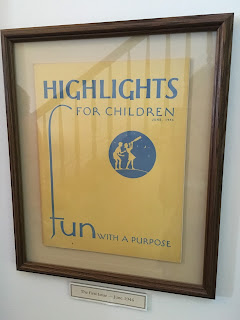 What did you dream of doing or being when you were a kid? Movie star? Astronaut? Maybe even a CEO like Alex Keaton? When I was a kid I'd read my monthly issue of Highlights for Children and dream that one day a story I wrote would be included in the magazine.

And in October 2015, I learned that this dream will come true. It's just as amazing as I imagined it would be to know that a dream I had as a child is now reality. The hard work I put into learning about what makes a good story, accepting revision suggestions and critiques, pondering for hours over the inclusion or deletion of a single word has paid off.

I had to celebrate this achievement with my family for several reasons. One, my middle child gave me the start of the idea almost two years ago. During that time I massaged the concept, wrote several drafts, jotted ideas in a tiny notebook whenever I had free time, brainstormed, wrote and re-wrote, and even stayed up past midnight one night just letting my mind wander with the possibilities.

The other reason I wanted to share this achievement with my family is to reinforce to my children that it's good to dream and have goals in life and that we should work hard for them. As a parent I want my boys to imagine themselves happy and successful at something they love. A huge part of reaching goals is putting in hard work. We do that a lot in our family.

Another huge part of reaching goals is naming your goal. I really believe in the power of visualizing a specific, measurable goal as a part of achieving that goal. If you don't know WHAT you're aiming for you won't know when you reach it.

Here's where the anxious mom comes in. When my boys name specific goals that I think are not achievable, I worry. I panic. How do I help them pick goals that are achievable without crushing their big dreams?

I remember the time a grown adult, a professional, dismissed my stated goal of publishing a book for children. It was during a job interview for a position I am so thrilled I never took. I shared my goal with this person and he scoffed at me and said "you'll never publish a children's book unless you're famous for a different reason."

I'm so glad I didn't listen. No one needs to have that kind of negativity in their life when they're on a mission. And I don't want to bring negativity into my kids' lives at this stage, but I do want to help them pick things that are not only possible but likely - yet at the same time I don't want them to aim low.

When my middle son say funny things like "I want to replace George Washington on the one dollar bill" I feel I'm able to explain how that's not likely without crushing the middle guy. He just adjusts his goal to replace Benjamin Franklin. Much more reasonable.

But when the oldest says he wants to play soccer for FC Barcelona, I hesitate. The odds of becoming a soccer player at that level are pretty minimal for him. For one, he doesn't speak Spanish. And two, I don't think our family is willing to make the sacrifices necessary for him to become an international soccer star for one of the world's top teams. He could aim for the MLS, and his chances would still be slim, but somehow that still feels like I'm asking him to settle for less.

There are some goals that aren't really time-limited. One can be a writer at almost any age, I think. But while I still have a chance to publish a book at age 45, or 50, no one at that age is going to play La Liga soccer. Perhaps I'm just worried that his goal has such a short time frame and such low odds of happening. He hasn't studied the statistics. He's still on the youthful possibilities side of the life equation.

I would have been crushed if my parents ever told me it was unlikely I'd ever get a story published in Highlights. It took me awhile, but I never let go of the dream. So how does a parent help a child choose (realistic?) dreams without sounding like she is asking her child to settle for less?
Posted by Elizabeth Pagel-Hogan at 9:30 AM