And I turned 40 last month, so I thought it was time to try something scary. We were in Deep Creek so one fearless fun thing I did was jump in the icy lake with my sister-in-law (after we had been in the hot tub). 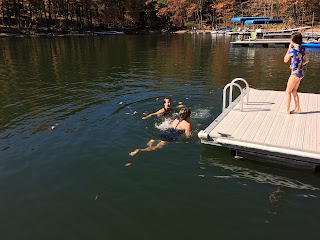 At the end of the weekend, we stopped by Wisp and our family decided to give the aerial adventures ropes courses a try!

My kids were so excited to do them, but I was not. I have done ropes courses and not liked them. I'm scared of heights. Really, truly scared. But they had had a taste of rock climbing the day before and they were jumping at the chance to get on the Spider Monkey course. 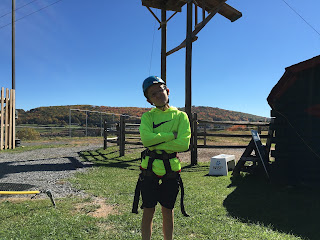 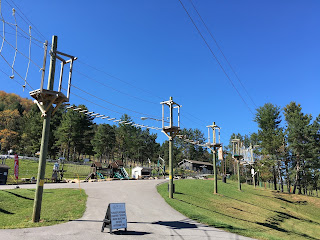 The middle one went first. I wasn't surprised at his eagerness, but when he got out on the spider web portion, the course shook and he felt the first jolts of fear. At one point on the course, he stopped to cry, wailling that he would die out there.

Luckily, fearless older brother was right behind to help him. (I should say fearless unless there is blood involved. ) 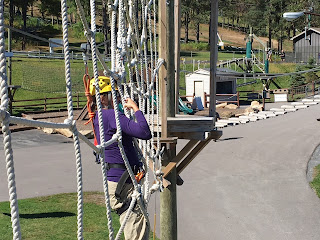 After it was all done, I definitely felt proud. And I learned that I love ziplines. In fact, the middle guy and I both loved the zip line, I think perhaps because we didn't have to do anything. My husband and oldest, who were definitely comfortable on the ropes course, were nervous about the zip line.

And the youngest? He raced through the Chipmunk ropes course without blinking an eye while his brothers and his parents cheered him on. 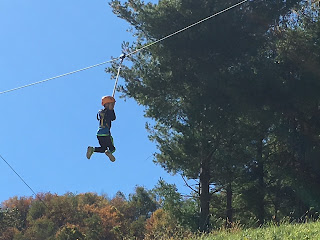 We also decided to try the Mountain Coaster. I thought it would be really fun because I love roller coasters, but I learned after two rides that I'm not a big fan of thrill rides that require me to be in control of the brakes or the speed. I like roller coasters because I can sit back and let go and just experience the thrill! Same with the zip line. And this explains to me a lot of my anxiety that comes with riding my bike. I don't like that I'm in charge of the equipment, the speed and the brakes. 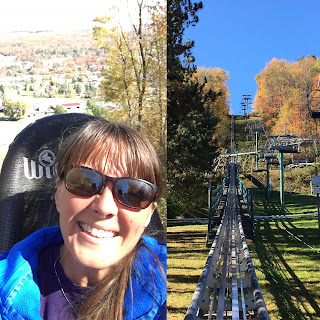 But I did it! I had some fearful fun. I know that there is a way to do things despite being scared and that I can learn a lot more when I do things that are a certain amount of scary.  So I'm OK with not being fearless, in the literal sense. I'm OK with being afraid of things. I think it's better to be honest about what scares me and to try and face those fears and learn what works to help me to handle fear. It's an extra birthday present to myself!

Posted by Elizabeth Pagel-Hogan at 10:20 AM

Email ThisBlogThis!Share to TwitterShare to FacebookShare to Pinterest
Labels: Awesome Mom, My Comfort Zone, Travel, Travel with Kids, Try It