Recently I posted about my third grader's horrible handwriting. He's a bright kid and I'm worried that his bad handwriting is going to have a negative impact on his school performance.

I don't just want him to have better handwriting, I want him to care about his handwriting. I'm not there in school, so I need him to want to write better.

So in addition to doing some reading online, I asked some friends - fellow parents and teachers - for advice. And I got some great advice! Since I'm a generous person I thought I'd share the tips with you.

1. One of my third grader's biggest problems is not leaving spaces between words. The other day, I was proofreading his first draft of his essay on the Algonquin tribes and I read a part as "The yalso." He jumped up and grabbed the paper and said, "No, that's "they also!" Oops. It was a perfect example of how spacing matters. So a friend shared this tip: have him use his finger to make a space between words. I suggested this as he prepared to work on his final version of his essay. He didn't like the idea at first because he thought his finger made the spaces TOO big. But he did start thinking about it. Almost win! 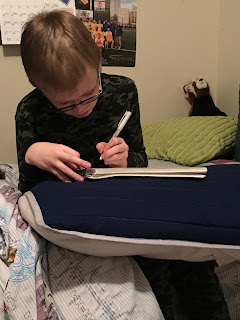 2. I talked to another mom of a third grader who is also a third grade teacher - bonus! She suggested a great tip for longer essays. "Have him talk out his ideas while you type them on a computer. Make the edits and corrections on the computer. Then print out the essay and have him transcribe the finished copy it by hand." I took her advice on both a science essay and the aforementioned Algonquin essay. Frankly, it worked like a charm! He really thought through his ideas, made stronger sentences and varied word choice, and then sat down and transcribed the essay onto looseleaf. Win! 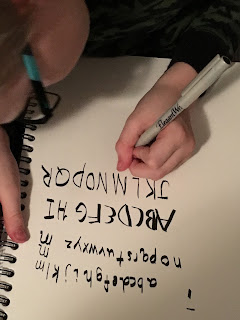 3. Take up calligraphy. This was not my idea, nor was it an idea from a parent or teacher. I owe J.K. Rowling and Harry Potter a big thank you. My third grader's been obsessed with Harry Potter and wanted a quill pen. We stopped at Jo-Ann's and grabbed a quill pen and ink pot and a set of calligraphy markers. And for a week, there has been some gorgeous handwriting going on around the house. He even wrote a note with his quill pen to ask his teacher if he could write his spelling words in his new calligraphy font and she agreed. This was a huge achievement.

4. Provide positive feedback when you see improvement. As a result of that spelling test and the hard work he put in to his calligraphy, I really wanted to celebrate his hard work and the improvement we were seeing. I've offered lots of "encouraging words" (his favorite thing) and taken lots of photos and my husband even brought up how much Steve Jobs cared about handwriting and fonts.


Posted by Elizabeth Pagel-Hogan at 6:57 AM