Never Compare One Race to Another

I know better than to compare different races to each other.

But I'm doing it anyway!

Exact same outfit! Yes, I wore the exact same outfit two years in a row.
But I did wear different shoes. Probably different underwear (because yes, I wear underwear when I run) but the same shirt and shorts and sunglasses. Am I creature of habit or what.

I ran the same leg, leg 4.
But it was a different distance. This year was a good amount longer than last year! And the exchange point finished up a hill! Ouch!

Thankfully another difference was a faster time. I know one can't expect to improve forever, but this race was a happy spike in the gentle downward aging slope of my pace line.

You might remember the weather at this year's CUCB 10 Mile was crazy. Thankfully the weather at the Marathon Relay was much better weather than the Cherry Blossom, a little rainy but cool. Warm enough I didn't have to bundle up and believe me, I did not take for granted running freely in my shorts and t-shirt.

But if you compare my splits from Cherry Blossom and Marathon Relay, they aren't too far off. For this race, I averaged 8:48 a mile over ten miles. But those last two miles were awful. 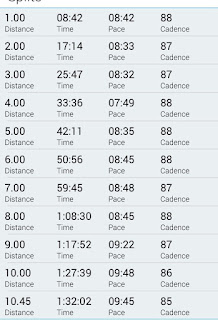 So either the clothes didn't hamper me or I was working WAY harder during the Cherry Blossom. I have no way of knowing though, because my Garmin was at zero percent on the day of the relay. Grr! That made me so mad. But I survived without my Garmin. I didn't quite run naked but less "teched up" than usual. And I even loved the run.
Posted by Elizabeth Pagel-Hogan at 6:00 AM