What an incredible race.

The Maryland Duathlon hosted by Rip It Events was my first duathlon ever and my first multisport event in over a year. I made the decision a little late in the summer after my husband decided he wanted to try it. I figured it would be a good race for me to prepare for the Presque Isle Triathlon in August.

Also, the race was in my hometown of Glenwood! Lots of good vibes.

The Sprint race is a 2 mile run, a 13 mile bike ride and a 2 mile run. I was not worried about the run portions, but I was worried about the bike. I'm not a confident biker to begin with, and while I had ridden the course a year or two ago, it was with my husband and it was not that great. He wanted me to ride in front so he could keep an eye on me, but that made me nervous to have him behind me. And he didn't like how far I was from the white line, but I didn't like the camber on the side of the road. There was a lot of anxiety on that ride.

First, I rode my bike every day the week leading up to the race, even if only for a short time. I even practiced mounting, clipping in, starting, riding, clipping out, stopping and dismounting for a full half hour one day. I call it my Mr. Miyagi workout. 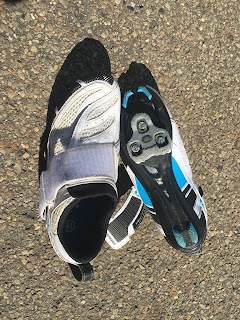 I needed to do this because I've felt some real anxiety starting recent rides. Not a paralysis of fear, but a sort of frozen hesitation on those first pedals.

The Mr. Miyagi workout helped me get past that frozen feeling and make the movements more automatic.


So race morning arrived and I was able to wake up nice and early after a decent night's rest. I ate a solid breakfast and headed out to the race site. Parking is super easy and I had all my gear. Everything was smooth. I even got to see my kids right before the race started thanks to the perfect timing of my mother-in-law. Here's me at the start of the first 2 mile run. 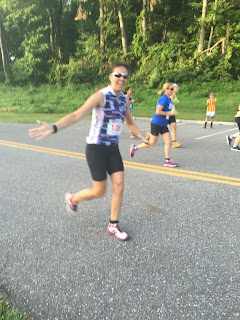 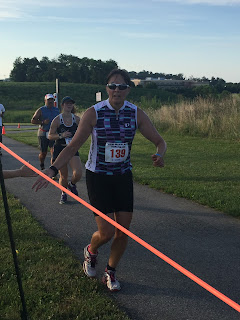 In transition, I had everything laid out the way I wanted. I did take time to put on gloves because I was worried sweaty hands would make it harder for me to shift and break. It was very humid in MD and I was very sweaty. I might not do that again, not sure. I ran my bike out through transition and got to the mount line. I implemented my Mr. Miyagi plan and went into my automatic moves of mounting the bike, clipping in, doing a few pedal half-circles, got moving, then clipped in on the left.

This mount area has a slight uphill and that made it hard to get started for some people. My family noted that more than one person fell as they tried to mount. I know one lady next to me got frustrated as she had trouble mounting. While I was in no way mounting with grace or fancy skill, I was calm and steady and started the bike leg with confidence. 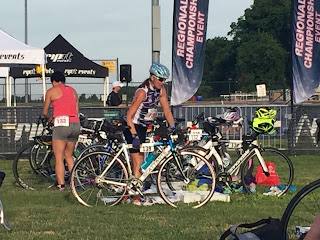 That confidence carried me through all 13 miles. I felt great. I got bolder going downhills and stayed as steady as I could uphill. I used my front gears a lot more than usual. I did still experience the weird delayed click when I shifted my back gears up hills (yes I still have to try to fix that) but it didn't unnerve me like it has in the past. I felt so great during this ride. While it wasn't fast, I definitely enjoyed myself and I think that's the main value of this ride.

There were a few decent hills. The first one shows up on Union Chapel heading to the Ed Warfield intersection, then there is a S hill on Daisy that was a challenge, and some false flats on Carrs Mill as you head to the finish. Near the finish are two decent climbs on Carrs Mill. Not steep but long and steady.

Here's a video of me finishing that shows how I happy I felt. 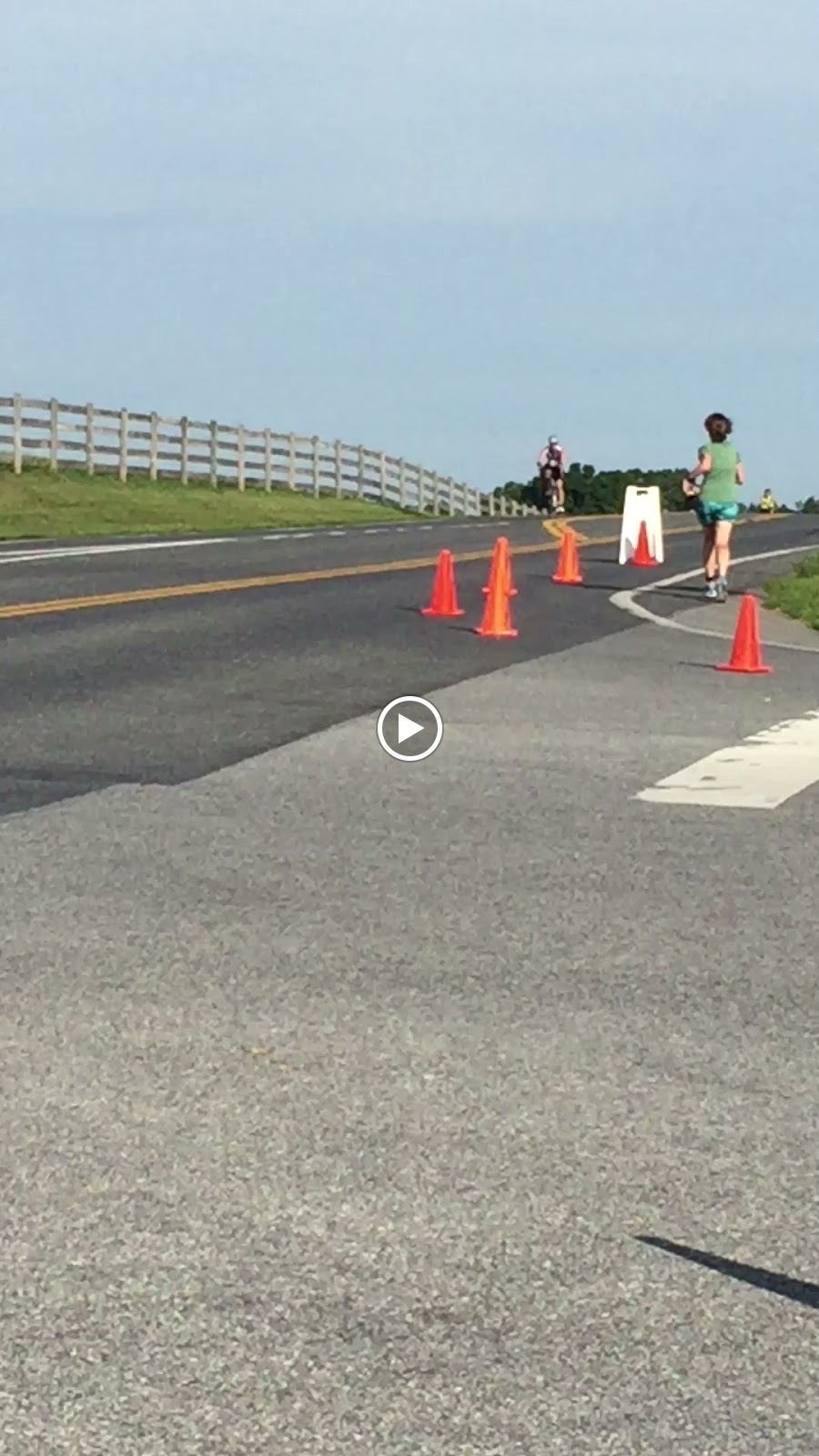 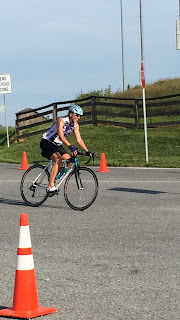 Back on the run!

The second run course was a reversal of the first run course. I passed people who were struggling up the hills. My strategy for the hills was to think about knee lift, about cadence, and about quick steps. I wanted to look ahead and keep moving to the finish. Carrs Mill Road does have a decent hill down to the turnaround and then back up to the park, and the finish is uphill. I wasn't worried about time, really, just focused on finishing strong after feeling so good on the bike. At this point, any finish time was a win because it was such a positive race experience. 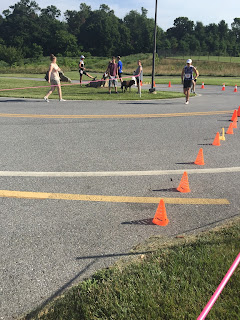 To the finish!! Powering through! 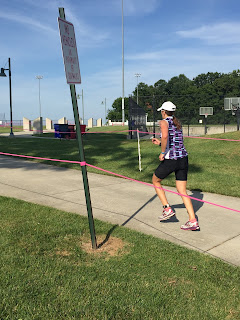 Here's a screenshot of my finish line dance. You may have seen the video version on Facebook. I'm told it was "mesmerizing." I don't mind. I was so happy. Also, finishers get an ice cold towel at the finish and that was pretty wonderful. 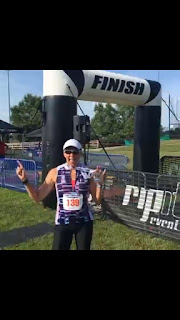 Here's my first run. Since my name isn't there, just count to the sixth result and you'll see I was 3rd in my age group for this run. Good place. Decent pace at 8:52. I think I could speed that up a little next year. I was holding back, worried about the hills and bike. 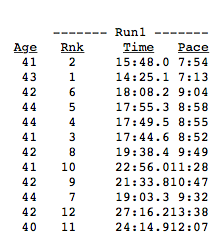 I dropped to 5th in my age group for T1. I blame the bike gloves. I could wear them on the run. 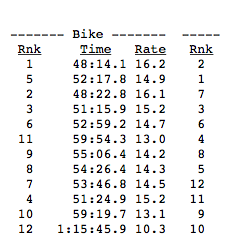 And I was 5th in my age group for my second run, only a few seconds behind the 4th place woman. 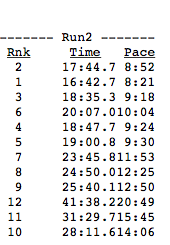 My final time was 1:40. I was 8 minutes behind the woman ahead of me. That's a lot! It's definitely from the bike. There's no way I can get 8 minutes from running. To drop 8 minutes from the bike, I'd have to maintain an average speed of 15 mph. I really think that's actually doable. I think I could get a minute faster on each run, too. That could put me closer to finishing top 3 in my age group. 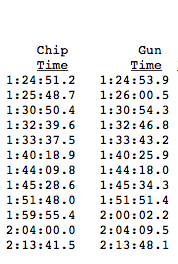 Obviously, there's no saying who will race next year, what the weather will be like, etc. But I loved this race and would happily do it again. I also feel like I can train for it better and put a little higher expectation on myself for my performance. I learned a lot, and gained confidence and felt really proud.