Me and My Oldest Go Ape! at North Park in Pittsburgh

This summer, my oldest has faced some tough growing pains. He had his first teeth extracted, he got cut from one soccer team - but made another! - and went to his first sleep away camp. So if that wasn't enough to stress him out, I also decided he and I were going to try the Go Ape! ropes course at North Park.

You might remember I'm not a fan of heights. And that we've attempted one ropes course before.

I didn't know if I would be able to Go Ape! and wondered if he'd go on his own with an instructor while I chickened out on the ground. But when we arrived at the course, we learned we were responsible for clipping ourselves in and out of all the safety lines way high up in the trees. By ourselves. On our own. That freaked me out. But I told myself to press on. 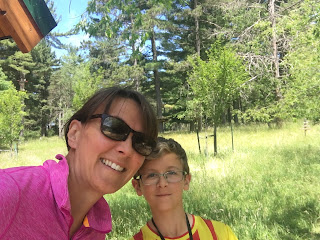 We got the harnesses on and went through the training course. First you read it and do it on your own, then the instructor walks you through it. They were referencing things that made me nervous, like rope ladders. And what did the instructor mean by a Tarzan swing? Like, swinging? On a rope? In the air?

Yes, that's what he meant.

We went to the first stage and watched a demonstration of hooking into the lines before climbing the ladder, unhooking and rebooking at the platform, then hooking in and going down the zip line. I do like a good zip line. It looked ok. And the training platform wasn't that high.

We did the mini-zipline and it was great.

So my oldest and I volunteered to go next and we began the wobbly ascent at the next stage. Which was much higher.

Halfway up, he turned around and said in a quiet, nervous voice, "Mom?"

Right behind him, I said in a quiet but confident voice, "We can do this. It's going to be great."

The next stage included the tarzan swing. YIKES. But we did it. 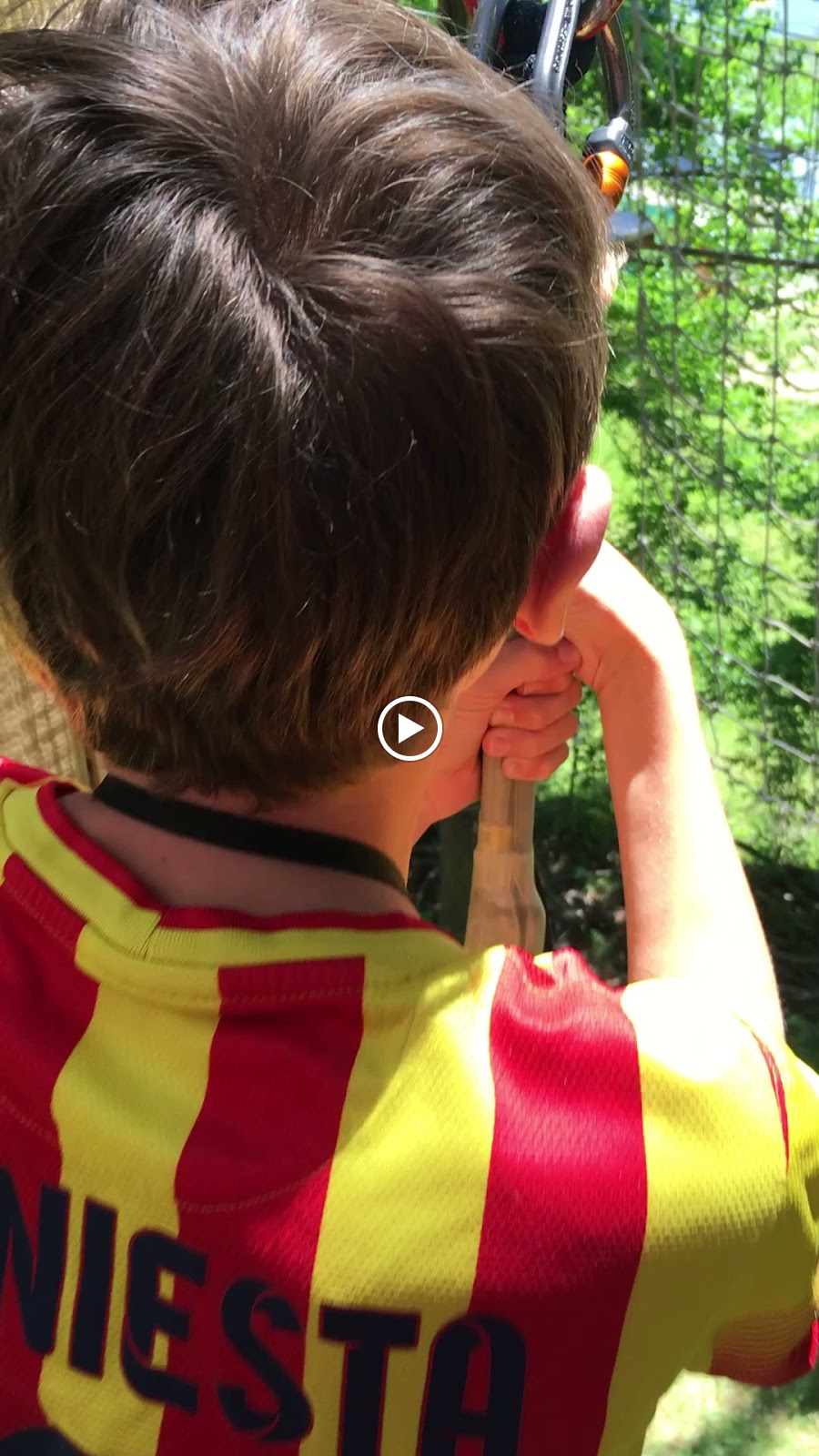 Go Ape! encourages people to not bring their phones or be very, very careful with them. We brought ours because we wanted treetop selfies. My husband texted me during the early part of the course and asked how I was holding up. I sent this terrified photo. 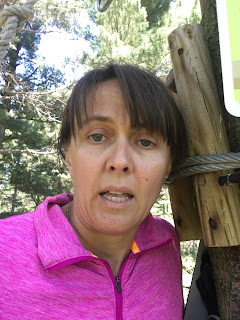 But we kept going. And I got to go down a zipline which I loved!! I learned to only focus on the tree in front of me as I climbed the rope ladder. And we learned to sit into our harnesses a little for stability and how to go a little faster over each obstacle. And we were laughing and having fun.

We were doing this. 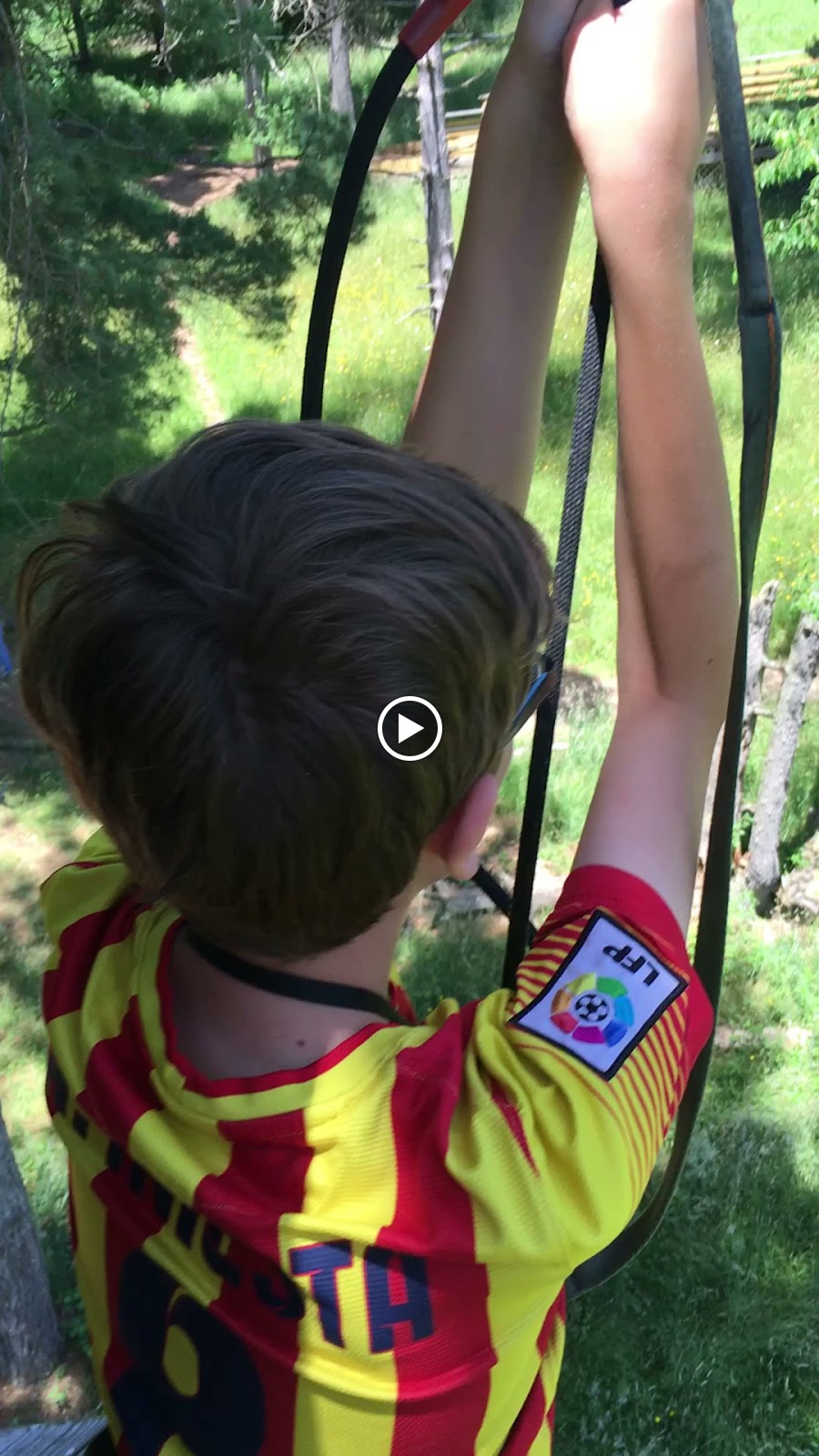 I sent my husband another photo later on. Things were going great. 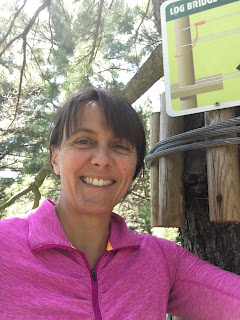 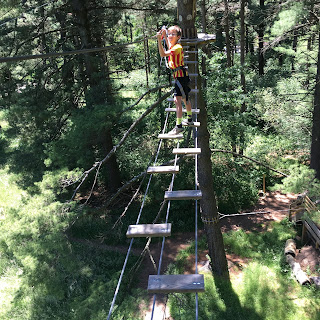 Actually, I was elated. It's hard to describe how incredible I felt not only conquering this course that really terrified me, but truly enjoying myself while I was up there. But like they say, a picture is worth a thousand words, so here you go: 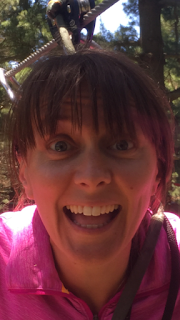 Yes, that's me.  I asked my son to take a photo of me completing an obstacle and he captured me looking insane.

But I was really happy.

No obstacle was so stressful that I felt any real fear. I felt nervous and challenged, which are good things, but I didn't feel fear. And every time I completed an obstacle I felt empowered and ready to tackle the next one. I was learning things about how the obstacles worked and how my body could handle the challenges. So yeah, that photo pretty much preserves how I felt that day.

My husband and kids all got a lot of laughs out that photo, too. I'm such a giving person.

We were not able to finish the whole course because we needed to pick up the younger two from camp. But we loved it so much we cannot wait to go back and do the entire course again. The staff was friendly and supportive and calm. And I'm really eager to take the other two when they are old enough (minimum age is 10). My oldest and I are also eager to take my husband so we can snap some funny photos of him.

Posted by Elizabeth Pagel-Hogan at 11:27 AM