How to Have Fun Doing a Triathlon

It's done. The "triathlon I didn't do two years ago" is now the "triathlon I just did!" It feels so good to be done. In a way, I knew nothing was going to stop me, not even toxic algae.

Everything really went great over race weekend. The race was Saturday morning, but we headed up to Erie on Thursday and got settled. Friday morning, we headed over to the peninsula and I was a little surprised to read about toxic algae. Just like Rio!! 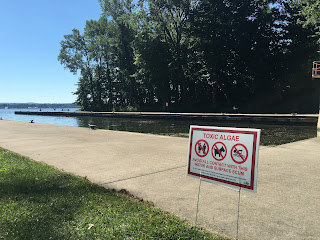 So Instead of doing an open water swim in the bay, I did a little bike ride and we all swam on the lake side. The kids had a chance to ride bikes and swim in Lake Erie.


I had a good meal for dinner the night before (ok, it was veggie pizza plus a s'mores pizza) and a quiet room in the hotel. I slept great. I wasn't even thinking about the toxic algae.

Yes, we were a little rushed the morning of the race, but that's what it's like doing races with kids in tow.

I had a lot of help on race day. My oldest actually helped me set up transition, which was nice. I had some help from a friend who literally held my hand as we entered the water. She was so cool for doing that. My husband helped me calm down when I cried before the race. Just because I was prepared and wanted to do this didn't mean I was totally fearless or free of anxiety.

The water was calm and a great temperature. I implemented my plan to use breaststroke as needed. You can see me breaststroking in the second swim drone video around 4:43. By the time I turned the first buoy, I was ready to freestyle. Two years ago, I remember thinking very early in the swim "I can't do this." This year, after I got in the water and thought quite early on, "I can do this."

And I did it! Two years ago my husband remembers me getting out of the water shaking my head in defeat. Not this year. All celebrating! 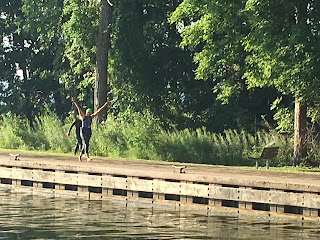 I also had a plan for the bike and it went well. I started easy and calm. I decided not to look at my speed on my bike computer. I knew the landmarks of the peninsula and just focused on riding strong and calm. I averaged 13.4 mph. I know it was slow, but it was better than panicking and not riding at all. 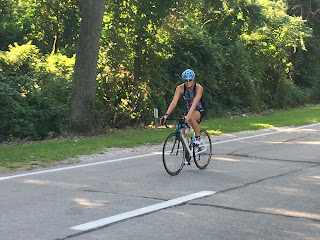 I let it all out on the run. Full speed ahead. It was flat, so I wasn't worried about my left leg bothering me too much. I averaged 8:31 a mile and felt so proud. The volunteer handing out water didn't get my joke about the toxic algae being in the water we were drinking. It wasn't that funny. 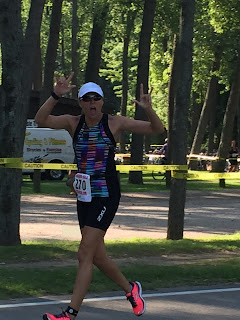 The kids were waiting at the finish to cheer for me and we were all pretty darn happy. I was proud of the boys for their support of me. They knew how anxious and worried I was. They encouraged me and really celebrated at the end. (And yes, they poured water on me. Sort of like a Gatorade celebration, but also washing off toxic algae). 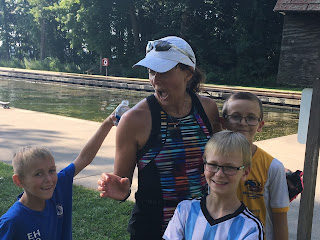 And this guy was amazing. 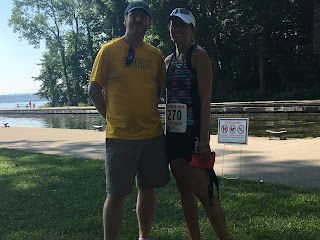 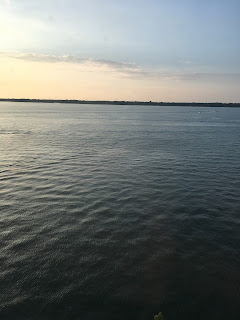 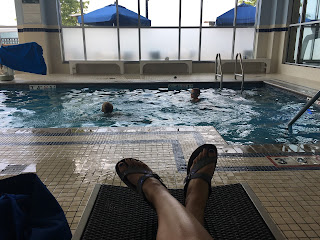 Posted by Elizabeth Pagel-Hogan at 3:39 PM