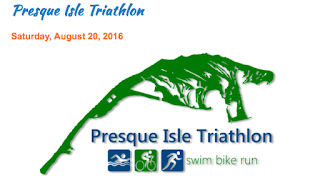 I think I've put in some really good swimming preparation, both in the pool and in open water. That was a real problem in my training two years ago:

I wasn’t allowed to swim with goggles for the first two weeks of August, so my swims were basically some half-effort head-above-water kicking and pulling drills.

I'm way ahead of that this year. I've done 3 open water swims and excellent pool work every week. I've even improved my one-sided breathing and managed to inject some left-side breathing into my workouts. In today's open water swim, I even took one breath on my left side to prove it was possible!! YAY!

But training for this race is like whack-a-mole. I've got my running and swimming in a good spot, so of course a problem pops up with cycling. It's a weird one, and not one I was expecting at all, especially after such a fun, relaxed race in the Maryland Duathlon!

It's weird and it's frustrating. And it's out the blue. I had a funny inkling of it the last ride before the MD Duathlon, though, when I was riding around my neighborhood doing a mini-brick and practicing transition. I put my foot on the pedals, and instead of smoothly flowing down the road, I kind of froze. I almost couldn't make my muscles do their thing. But the moment passed and I did, not fearlessly, but kind of tucking the fear somewhere else.

I did the duathlon and really felt great. The next week, I wanted to try something out of my comfort zone and met my coach at Hartwood Acres. We started fairly smoothly, but at the top of a small hill, I gazed down the slope and noticed the curve to the right, and panicked. I froze. I stopped pedaling and hopped off my bike and told my coach I couldn't go that way. We went a different direction, completed a much shorter ride than planned, and instead I went running.

The next ride I did was on my slower hybrid and I went to Montour trail. It's straight and flat. I biked for an enjoyable 50 minutes, and wasn't that fazed by my embarrassing fall at the Park Manor Blvd intersection. I transitioned to a very quick run for what I felt was a successful brick. 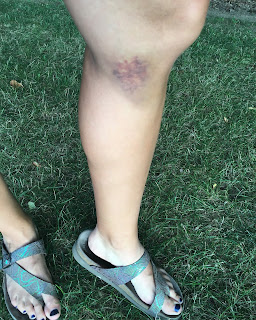 Last Friday rolled around and it was time for my next brick. It had been a tough week and I had to rearrange workouts because of crazy summer schedules. I parked along Lakeshore at North Park, a place I have ridden many, many (many) times, and freaked out.

Here's what I mean. I couldn't make my legs start pedaling. I would clip in, push off, and feel like I was going to fall. My arms would jerk and the bike wobble. I stopped. Coasted. Tried to lift my foot into the clips. Failed. Coasted. Tip-toed down the road. Tried to balance. Failed. Got off bike. Walked back to start place. Wondered what the hell was going on. Panicked.

It might have been a mini-panic attack, but it was a definite freak out. My leg muscles trembled. I was sweating and nauseous. My hands were cramped then weak. My heart was beating way too fast. I was well aware of all of these physiological reactions and knew there were some crazy fear response going on here, so I tried to implement the strategies from the open water clinic. I talked to myself a lot and visualized what I would tell my husband later. I didn't want to say, "I couldn't ride my bike today." I imagined saying, "I had a terrible problem trying to ride my bike today, but I made myself calm down and was finally able to ride." And that's the scenario I made happen.

I didn't really cry, but I wanted to. I gave up twice. I actually walked back to my van saying, "I just don't have it today." But I tried again, because I needed to ride my bike for 13 miles in two weeks.  I failed again, and a few more times, and then somehow, got my foot on the pedal and started moving. I hadn't turned off my Garmin, so I noticed it had taken me a full 15 minutes to get moving on my bike.

I rode for a total of 50 minutes that day, but it was slow and tense. Every little thing bothered me. A bug hitting me in the face. A car swerved near me. A kid on a bike wobbling at me. My legs were weak going up hills from the fear-adrenaline from earlier. But I rode my bike.

The brick didn't happen because I forgot my running shoes, but in a way my workout that day was a greater mental challenge than I have faced in awhile. And even though I survived the ride, my fear isn't gone. Sunday, I took my bike to the school parking lot and practiced starting on the pedals. And I did it today, too. I'll try it again tomorrow. I'm experimenting with what works and I've had some success with coasting up to speed, gaining my balance, and then clipping in. Today I also clipped in with my left foot first, which is a weird departure from my normal routine.

Prior to the duathlon I did a 30 minute clip-in/clip-out workout that I named "Mr. Miyagi." I think I need to do that again. But like my husband says, this feels like a real regression of skills and comfort, and I don't know why. I don't have time to figure out why, right now, I have to just figure out how to get myself moving so I can do the triathlon. After the race, then I'll think about why.

In addition to practicing pedaling, I have some other plans:

I've also started reading Triathlon EQ. A big part of that book includes guidance on managing the body's fear response, but also on managing our thoughts. Triathlon EQ encourages athletes to think about people they love, about what we're grateful for, and positive moments of success. I have a lot of those. I need to tuck them in my mind's pocket and pull them out with a flourish. 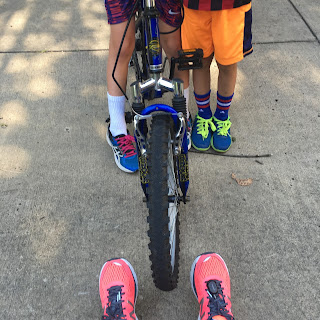 I will think about my middle son mastering his fears of putting his face in the water. I'll think about my youngest learning to ride a bike this summer and keeping his positive attitude in the face of incredible frustration. I'll think about my oldest handling being cut from a team for the first time, and trying out and making a new team. I'll think about my husband tackling his first duathlon. I'm so grateful for the time in my life to train for my events and the health of my body. And I will think about my wonderful feeling when finished the duathlon, my pride in winning the Pen Parentis Fellowship award, and the feeling I will have when I finish this race.


Posted by Elizabeth Pagel-Hogan at 10:46 PM