I Joined an Adult Soccer Team 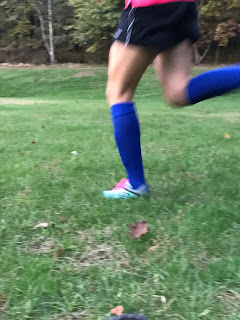 On Monday, a week after the election, I played in my first ever soccer game. I've coached little kids' soccer. I've watched a lot of games. I've played with my kids in the backyard, but I've never been on a team. I've made the soccerifice.

But this fall, I joined one that my husband formed at his work. We had two practices, I bought some cleats, and then got out there. It was scary. We lost 15-2, but I had some nice touches and even had a shot on goal.

It feels a little disingenuous to write about how scared I was to get out there and play soccer when our nation is facing a truly frightening future. I invested a lot of emotion and hope in our election. I just want to reassure you I'm not writing this and forgetting about everything else.

I'm writing this to remind myself that it is scary to go outside your comfort zone, whether it's playing a sport, swimming in open water, standing up to racism and bigotry, or facing up to our own prejudices and ignorance.

We have to push ourselves to do what's right.

Playing on a team, instead of always running on my own, will remind me I'm not alone.

Playing and losing will remind me that we often learn more from losing than winning.

And when it comes to playing soccer and working for a more just, equal, kind culture I still have a lot to learn.
Posted by Elizabeth Pagel-Hogan at 4:16 PM

Email ThisBlogThis!Share to TwitterShare to FacebookShare to Pinterest
Labels: My Comfort Zone, Soccer, Try It