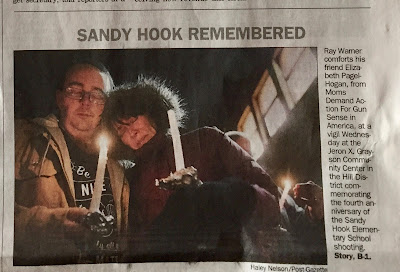 On Wednesday, December 14, 2016 I attended a vigil for the children and adults killed at Sandy Hook. I was given a chance to speak and this is what I said:

Four years ago, I was in a kindergarten classroom helping five and six year olds with holiday crafts. When I left that classroom, the world had changed.
I didn’t know what to say or do. I was terrified. I was silent.
Then I found Moms Demand Action, and with it, my moment of silence ended. I learned how to speak up. I learned about the problem of gun violence in my community, my state, and my country.
And thanks to Moms Demand Action, I learned about the many other groups that have been speaking up and working on the problem of gun violence for years. I joined the movement.
I learned there are millions of other moms and friends that felt the same way. I learned that it's not just the kids we want to protect, it's women from domestic abusers, it's police officers just trying to do their job, it's teenage boys just walking the streets. It is the memory of these innocent victims, the 91 people who die every day due to gun violence, that drives us to fight for commonsense gun laws.
I have a first grader now, and sending him to school today was difficult. I won’t ever forget what happened in Sandy Hook. It’s just not option.
Keeping silent when we have so much work to do is not an option either. So let’s #keepgoing.

That night, I was reminded (but I don't really forget) that 91 Americans die every day from gun violence. That's almost 4 Sandy Hooks a day.

A man near me was recently arrested and found to have 300 weapons in his Shaler home.

A woman and a police officer were killed during a domestic violence dispute. The killer was allowed to keep his weapons even after he had a Protection from Abuse order.

On December 15,  I contacted my elected officials to ask them what they plan to do to reduce gun violence in their upcoming terms. I received some canned responses and some silence. I'll let you know if I hear anything.

In the meantime, I urge you to join Moms Demand Action and help us work to reduce gun violence.
Posted by Elizabeth Pagel-Hogan at 2:24 PM