I've been binge-watching some historical fiction lately, but I'm doing it for a good cause.

I recently did a book review of Wired for Story, a book that examines how our brains are made to devour stories and how stories have been a major factor in helping us (humans) evolve. Stories have taught us how to handle conflict, threats, and dangers without having to actually participate in the conflict, threats and dangers. Stories are safe ways to explore scary situations and work through how we might handle them. Stories prepare us for what we might face in the world and help us navigate.

Stories used to be mostly oral, before there was widespread literacy. As more and more people learned to read, the rise of the novel showed just how much we loved good fictional stories. And now, in the modern world, we have Netflix and PBS on the iPad.

Yes, I've been indulging in some binge-watching as I go through my day. I watch while I fold laundry, while I run on the treadmill, sometimes when I batch cook our CSA. I love these shows because I'm basically familiar with the topics and time periods. Like any good story, they've combined the familiar with the new. 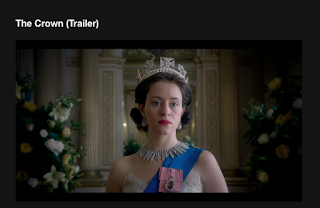 I've watched the first season of The Crown, a show that covers the beginning of the reign of Elizabeth II, the current Queen of England. This is a Netflix series. It's set in the early 1950s and there's a lot of change happening. Though she's the queen, Elizabeth is still not what I would call a modern woman. She's smart and capable, but her relationship to her husband is still one of those frustrating ones where he gets to fool around and she has to look the other way, but God forbid she need to handle work tasks when he doesn't want her to. Despite the frustration and unfairness, or maybe because of it, I've still really enjoyed learning about the issues Britain faced at this time period. Also, John Lithgow as Churchill is crazy. 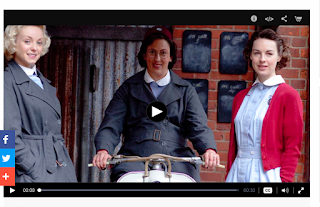 From PBS and set about the same time but in a completely different part of London, Call the Midwife is a series about midwives working for the National Health in a poor region of east London called Poplar. It's based on a book by a real midwife, but the later seasons continue past where the book stops. My favorite character, frankly, is the rich aristocrat Chummy who joins the crew of nurses, but she's not really in the last two seasons. I miss her. This show dips into lots of different social issues in various episodes. 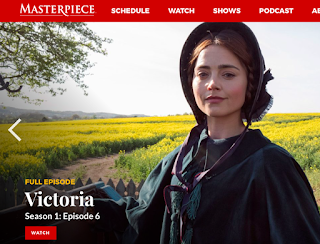 Also on PBS is the new series Victoria. This show takes us back to England of the 1830s. While it doesn't tackle social issues very much in the first few episodes that I've seen, there's an episode that subtly contrast's Prince Albert's desire for financial freedom from his wife with a young working English girl (Nancy) who knows if she gets married she'll sacrifice her financial freedom, too. Of course those two characters weren't really going to meet up and commiserate in real life, so the problem just continued.

Yes, binge-watching these series is an escape from dealing with the big issues of our time. And yes I'm totally privileged to be able to watch them during the day while I do minor chores. But there are connections in these shows to what I'm concerned about today. Access to healthcare. Religious freedom. Women's equality. Racism. Homophobia. War. Poverty. Freedom of the press.And I see how characters deal with the issues, how they choose to act. I watch the portrayals of the "good guys" and the "bad guys." And I try to learn.

While I have loved the familiarity and safety of these shows, I also realize I need to branch out and explore shows that include more people who don't look like me, don't talk like me, and don't think like me.

What series do you find challenge your world views and get you thinking?

Posted by Elizabeth Pagel-Hogan at 11:05 AM