When You Don't Mean that Mean Joke

Do you know Triumph the Insult Comedian Dog? 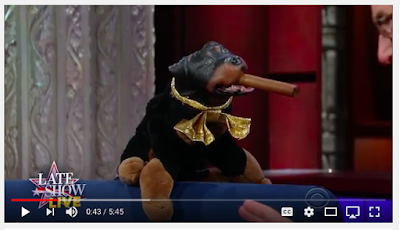 He makes mean jokes, and he means them.


I have a big problem when someone makes a mean joke, then says "I didn't mean it." Or calls me oversensitive for not seeing the humor in it. Like it's my fault that I didn't get their mean joke. Oh, I got it. You don't need to explain the humor to me. It's just not funny.

This happened to my middle son recently. He was in a class with several other kids and they were all supposed to one thing, and a few of them did the wrong thing. Simple mistake.

(I'd give more detail, but if I do, people I know will know who and what I mean and there may be repercussions. And my son has asked me NOT to do anything about this.)

To my son's credit, he told me his first thought was, "Um, yes I am smart, I just made a mistake." I'm pretty proud of his reaction. We need to able to admit when we make mistakes and not let them destroy our self-esteem, even when others make jokes at our expense.

I felt this was a pretty stupid act for an instructor of children. Heck, it would be dumb for an instructor of adults. My son told me he knows the teacher was trying to be funny. But it wasn't. It was mean. A less resilient kid could have heard that for the tenth time that day.

Like I said, my son asked me not to say anything to the teacher. I think my son doesn't want to appear oversensitive or like a complainer. I feel bad that he doesn't want to call the teacher out, but this is my son's call here. He's only nine, but my job isn't to fix all of his problems for him. My job is to help him learn how to face problems, and realize some can't be fixed, they can only be handled.

I'm no expert on that by the way, because I have a similar problem. A friend of mine shared a meme on Facebook that was intended to be funny. I know it was meant as a humorous share. But it equates the elaborate and kind of insane dance of a culture with people dancing outside the bathroom when they have to pee.

It's just a joke, right?

I'm not sure it's a good one. It feels mean to me. And I'm involved in learning about ways I've let racist systems and habits continue without calling them out. I discussed this with my husband before bed.

"Should I say anything?" I asked. "If I don't, am I letting racism slide?"
"People don't like being called racists," he said. "She could shut down and not listen."
"What if I emphasized that the joke, the meme was racist, and didn't say SHE was racist?"
"That's a tough nuance," he said. "Would she get it?"

I was nervous to say anything, especially on Facebook, where even really, really, really well-intentioned comments get said (and read) wrong. I wanted to convey that I like funny jokes, but why is it funny to equate this cultural expression with going to the bathroom?

After my run, I turned to Google and learned the dance is from the Ivory Coast, from the Gouro ethnic group. It's called the Zaouli Mask Dance. One site says it's performed by a man it represents feminine beauty. It started in the 1950s, so it's almost 70 years old. Not ancient, but not new. It's performed to bring about group togetherness and peace. CNN has an article about how the dance is used to connect modern people with traditions in the Ivory Coast. That CNN video shows lots more dances I had never heard of.

I learned so new things watching that video. I learned more about a culture I know little about. I also learned about myself, and what I'm scared to do.

Posted by Elizabeth Pagel-Hogan at 7:37 AM