The overall plan is to visit Monticello, Jamestown/Yorktown, Mt. Vernon, and Valley Forge. During our drives, we're listening to Sarah Vowell's Lafayette and snacking on Doritos. The kids are equally excited to visit these famous places as they are to swim in hotel pools. It's going to be an epic road trip.

Our first day was Pittsburgh to Front Royal, about a 3.5 hour drive. Due to soccer, we started around 3pm instead of the morning departure time I had planned for. For some reason, I didn't know about some downtown road closures and that meant we had to do some detours and u-turns right at the start of the trip. It was a perfect opportunity to use the "Look kids, Parliament, Big Ben" reference from European Vacation.

Also, because we left later and maybe because of the detour, two stops on our itinerary weren't open by the time we got to Front Royal, sort of like Wally World. We hope to visit Dinosaur Land and Skyline Caverns tomorrow.

Road trips are all about spontaneity and last minute changes of plan. So instead of those points of interest, we stopped in Paw Paw, WV. This wasn't my first visit to Paw Paw. I spent a few snowy winter days and nights in a cabin on a mountainside in Paw Paw when I was a kid. This visit was considerably warmer. 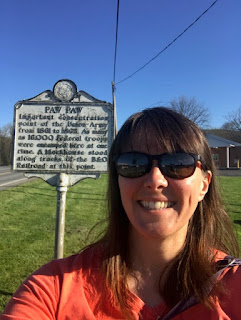 Paw Paw is named after the paw paw fruit. It grows along rivers and pparently George Washington was a fan of the custard, but it was nowhere to be had when we stopped in town. We asked! Apparently the process to prepare it is too difficult. And it tastes like bananas, we were told, so I'm a little disappointed. Instead we settled for soft serve. 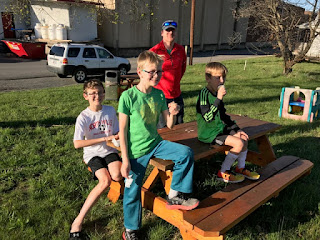 Paw Paw is right on the border of MD and WV. The Potomac runs nearby and so does the C&O Canal. This town boasts of the largest human-made structure on the canal, a 3,100 ft tunnel cut through a mountain that saved 6 miles of river travel. It's called the Paw Paw tunnel. We hiked the 1km along the towpath to tunnel and walked to the halfway point. 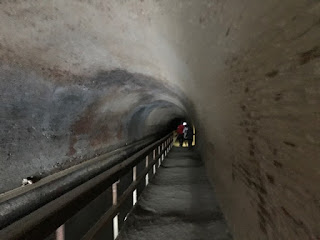 It got dark. We stopped and made shadow puppets on the wall. Not pictured is my excellent swan shadow puppet. 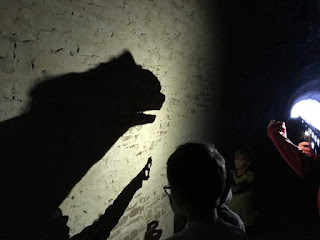 Since our vacations are always infused with learning, the tunnel provided a great opportunity to teach the kids about keystones. We also learned about the mechanics of water pumps. 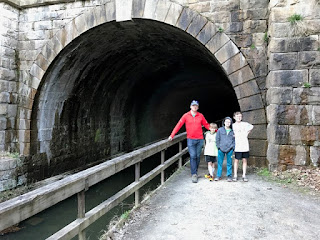 Time to rest up for a busy day tomorrow.

We drove from Pittsburgh to Front Royal, about 3.5 hours. We stayed at the Hampton Inn Suites in Front Royal, had ice cream for lunch in Paw Paw and ate a late dinner at TGIFridays.

Read about Revolutionary Road Trip Day 2, in which we go hundreds of feet below the surface and thousands of feet above sea level all in one day.

Posted by Elizabeth Pagel-Hogan at 10:14 PM