Monday dawned bright and beautiful in Front Royal, VA, where we started Day 2 of our Revolutionary Road Trip. We got to bed quite late and there were some giddy, tired kiddies sharing beds in the Hampton Inn. If you have siblings (Happy National Sibling Day, little brother), then you might be familiar with your bed partner spinning in place and winding the sheets and blankets around themselves like pasta on a fork.

Despite the bedtime shenanigans, our morning got off to a decent start with a visit the Dinosaur Land. We were the first and only people there when they opened and we absolutely loved it. You may have seen my classic photo with the shark. That shark is just one of many fun photo opps at this roadside gem.

Once you arrive at Dinosaur Land, steel yourself for the temptations of the extensive gift shop. You must pass through two stages of tchotchkes before entering the actual park. 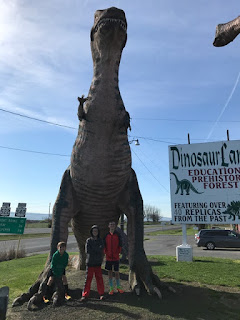 We didn't leave out learning even from this part of our road trip and emphasized the incorrect representations of theropod saurischian dinosaurs like T. Rex with their tails dragging on the ground.

The park does not limit itself to dinosaurs, but instead offers a large King Kong, a King Cobra, a Preying Mantis and an Octopus surrounded by cacti. As one does. 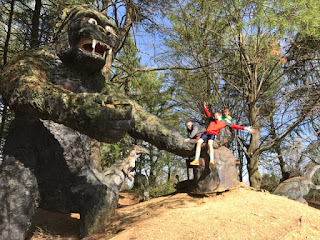 On our way out, we passed through the Sirenian gift shop once again. We managed to escape with only two plastic replicas of Native American spears, a book on how to make shadow puppets (inspired by our Day 1 activities), some small candy selections, a 3D holographic magnet of a dinosaur, and a cup and ball game. Of those purchases, I feel the cup and ball game has the most Revolutionary flavor, although the 3D holographic magnet is not far off.

Next stop a few miles south but still in Front Royal was Skyline Caverns. We passed a tour bus on the way there and I worried we'd be we caught in a huge crowd. But we escaped that fate and headed into a more difficult trial: killing 15 minutes before the tour started in an even larger gift shop. This time, gems and minerals of all sizes and an incredible array of fake kids' weapons beckoned them.

Thankfully, the tour began and the boys forgot about the Ancient Weapon plastic sword and the Future Weapon plastic gun. Instead, we saw stalagmites, stalactites, flow rock, and columns. 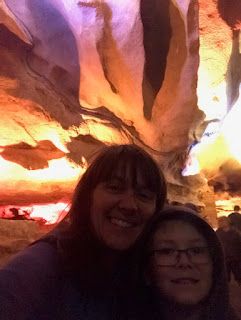 The middle was happy show off his knowledge of calcite and the tour guide, who reminded me of my brother (Happy Siblings Day), loved showing off his green laser pointer. I heard another tour guide threaten to punish him for his use of said green laser.

While the tour of the cavern required the kids to keep their hands to themselves - a hard challenge - they were really thrilled with some of the features, like Fairyland Lake. 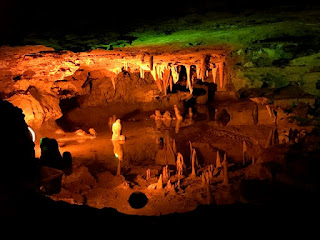 But the tour guide did a good job entertaining our kids with jokes about megalodon teeth and  stalagpipes (pictured below). 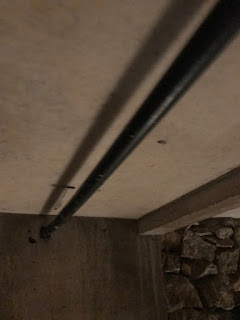 There were two things we could touch. One, a stalactite the original cavers tried to move but couldn't, so now people on tour can touch it just like Bing Crosby did. And two, we were invited to bang on a large protruding finger of rock that rang like a bell. This meant every parent who had been keeping their kids' hands off of everything asked their children, somewhat inappropriately, "Do you want to hit that?"

After we left Skyline, which my husband compared a little unfavorably to Luray, we grabbed a tasty lunch in Front Royal and then ascended Skyline Drive. We saw a lot of trees, mountains, and sky. Luckily, some other drivers spotted this bear in a tree and had pulled over, so we got to see it, too. 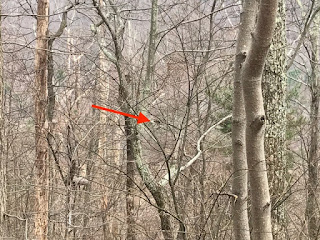 As we drove, we listened to a few selections from O Brother, two versions of Shenandoah, and Bob Dylan's Moonshiner before we lost the signal to download other songs. At mile 45, we got out and hiked almost a mile straight uphill to Hawksbill and looked over the overlook. I can't go near edges, so I took photos from a distance. 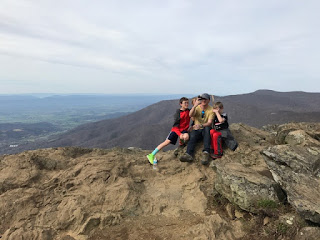 I preferred to station myself in the walled off portion of the overlook, and the youngest took this photo of me and my middle. 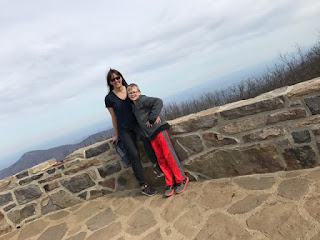 The hike was really exhausting, so the ride to Charlottesville was quiet and calm, a sign of an action packed day. We did dinner and managed a brief swim in the pool.

I think our tally of fights was around 3, and our tally of serious laughs was upwards of two dozen. And no vomit or car crashes yet, so we're ahead compared to last year's spring break road trip. There were some moments that are just too long to explain in this blog post, but don't worry, I'm keeping a much longer account that could someday become a travel memoir only my friends and family will read.

Tomorrow we finally reach Monticello, our first of many visits to the homes of slave-holding Founding Fathers who denied women the vote. I'm expecting some interesting reactions. And the soundtrack is ready.

Lunch in Front Royal was at Blue Wing Frog. You must try Jessica's Grilled Cheese. We picked Skyline Drive to travel between Front Royal and Charlottesville, so that was over 2 hrs. We stayed at a Hyatt Place Charlottesville that gave us easy access to Burger Bach for dinner and Duck Donuts the next day for breakfast.

On to Day 3… where we question the sense of the five cent coin.
Posted by Elizabeth Pagel-Hogan at 10:24 PM