"We should kick him off the nickel," the middle kid muttered as we waited in line for our tour of Monticello. 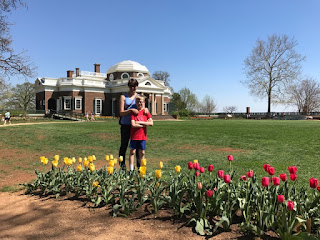 This is the "nickel view" of Monticello. After we finished the Slavery at Monticello tour, we were all mad. We were mad people had to sleep 15 to a cabin. We were mad they weren't given enough food and the vegetable garden was walled off. We were mad Jefferson told Lafayette he wouldn't teach the people he owned to read and write because he thought they'd forge their manumission papers.

Did Jefferson think people liked being slaves? Nope. Did he keep slaves anyway, and order them beaten? Yep.

Yes, Jefferson wrote the Declaration of Independence. But he also kept slaves and didn't free them on his death. Or his life.

Like the man himself, the visit wasn't all bad. The gardens were beautiful and the view from the small mountain was stunning. 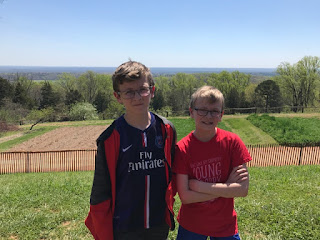 We saw possibly the first parquet floor in a U.S. home, which gave me the perfect opportunity to murmur "butter" to my husband.

There were some delightful things in his home, like the clock that also tracked days of the week, the polygraph writing device, and French doors that closed together when you only moved one. And Monticello may be the first U.S. house with a dome. We even went into the basement. 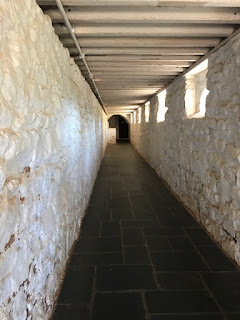 But we also learned about the punishments he meted out on nail makers who wasted the iron. And the way he sold people down south in the dead of night so it was seem "as if death had taken them." And the fact that he owned their labor from sunup to sundown and after his death people were sold to cover his extensive financial debts. It was horrible and when my kids asked "why?" I had no good answers.

We didn't avoid the ugly parts of Jefferson. In fact, we visited the heck out of the "little mountain." Yes, we balanced out our dissatisfaction by loading up on some fun (educational) souvenirs. The oldest selected a cypher wheel, inspired by the one Jefferson invented. 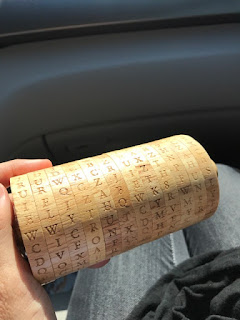 In the spirit of the Lewis and Clark expedition sponsored by Jefferson (that really started in Pittsburgh), the middle chose a compass and the youngest a map.

Our day started with a visit to the University of Virginia, a place of learning founded by Thomas Jefferson, but only for white dudes. Things are different now and the university is a great school that educates all kinds of people from all over the world. It's an important legacy left by a very flawed human being. 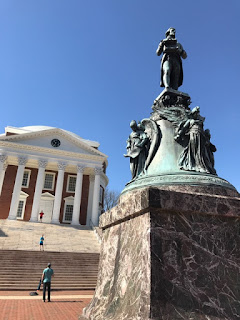 Are there two sides to people? In Jefferson's case I feel the scared, selfish side really won out over the idealistic, world-changing side. Good or bad, they are both parts of him, like heads and tails of a coin. Which side of the coin lands heads up?

Lunch was at the cafe at Monticello. The food was good but we feel they missed out on a chance to give the sandwiches witty presidential names. What would you name the Jeffersonian Grilled Cheese? Or the Madison Hot Dog? Our drive to Yorktown was an uneventful 2 hrs on the I-64. Dinner was at Tazza in the unfortunately named Virginian town of Short Pump. What is it with those Virginian town names? Happily dinner included budino. We stayed two nights at the Doubletree by Hilton Hotel Williamsburg and enjoyed its indoor/outdoor pool and delicious cookies! The digital key feature also came in handy here as we entered this hotel with our arms FULL.

Continue to Days 4, 5 and 6… including taking Redoubts 9 and 10 and barely making it to Mt. Vernon.
Posted by Elizabeth Pagel-Hogan at 9:27 PM