Over the weekend, my oldest called my husband and I "strict." This is the first time he's said that, but he had several examples saved up in his head, so I guess he's been thinking about it for awhile. I wasn't happy that he was upset, but part of me took his comment as a badge of pride.

We were in Columbus, OH all weekend for a soccer tournament. When we returned it was late Sunday night. Monday morning, the oldest ate his Aero bar for breakfast. Then he went to the pantry and could not find his favorite foods. And the complaints started.

No Clif bars. No bunny snacks. No pretzels or tortilla chips. There's nothing to eat.

The youngest then complained about no Go-Go squeeze. No tortilla chips. There's nothing to eat.

(The middle always buys lunch because he doesn't like to pack his lunch. But he also doesn't complain about his lunch.)

I set forth on an epic journey through the pantry and the fridge, recommending ALL of the foods we had. I knew things were bad when the oldest wouldn't even consider white cheddar (he wouldn't even admit it was white cheddar) and tomatoes. Those are two of his favorite foods.

The youngest packed a lunch that consisted only of grain-based carbs. 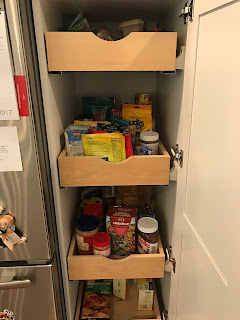 There is actually a lot of food in our fridge and cupboard. It's just not the food they want. It got so bad that my oldest was rudely saying "NO" before I even finished naming foods. Then the youngest would say "no" in this resigned, pathetic whiny voice to everything I offered.

We have food. There is food to eat. But these kids are too spoiled with their special food choices they are used to having their own special foods. I lost my patience and shouted at them both that if they were hungry, they would eat the food we had.

I want to get some food that I want from the store. So I will eventually grocery shop. But my tough parenting question is this:


Posted by Elizabeth Pagel-Hogan at 2:15 PM