Art of the Road Trip

If you follow the adventures of our family, you know we love a good road trip. Check out our Revolutionary War Road Trip if you have an interest in history. Normally, we do family style road trips, but this August, our kids were on their own adventures on the Eastern Shore, so my husband and I headed out sans enfants.

We saw a lot of artwork on this trip and this post doesn't contain all of it, but it does highlight some thought-provoking pieces that weren't found in museums. These pieces were memorable, they gave me insight into the artist or creator, they offered a lens through which to view the world, they were works of creation and creativity.

Check out these "historical markers" we spotted in Kingston. 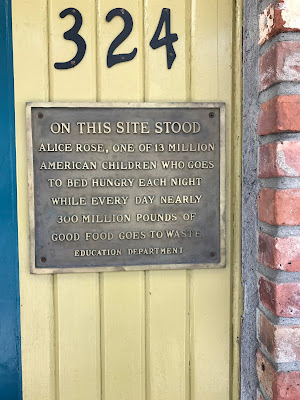 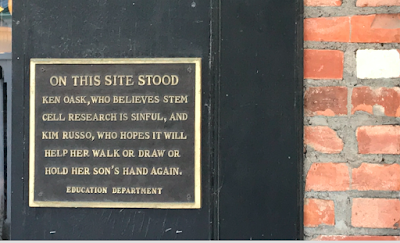 These markers are scattered around the Hudson Valley region. The artist, Norm Magnusson, has really found a way to catch people's attention and present a viewpoint about the world.

Many times, historical markers mention an event without placing the people or consequences into context. I like how these markers prod us to face important, current social events. But as a historian, I also like thinking about how certain events were chosen for those traditional markers and what people and events have been left out.

What historical events should be on markers that aren't?

On to the next piece. This is my husband standing on graffiti highway in Centralia, PA. Back in the 1960s, the town council started a fire to clear out an overfull landfill. The fire caught in an coal mine seam and burned underground. No one seemed to have a way to solve it and the town slowly sunk into disaster. The ground opened up and the fire released toxic gases and collapsed into sinkholes. The town was abandoned and this highway cut off from the main route. Now, people come and spray paint the half-mile stretch. 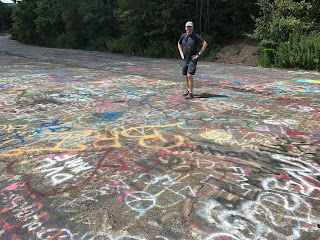 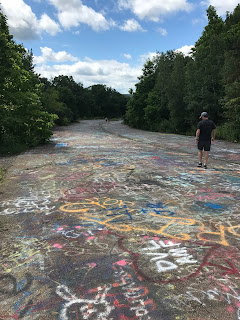 Some of the graffiti was what you'd expect: lots of penises, lots of rude words, lots of poop emojis. There were also flowers, suns, mushrooms, hearts, seahorses, mermaids and skulls. There were some sweet ones of initialed people promising to love one another forever.

There were contemporary pop culture references. Underneath "Summer of 2017" we were reminded "Winter is Coming." A healthy mix of political messages. There were also inspirational messages like "Even flowers that get stepped on bloom again." 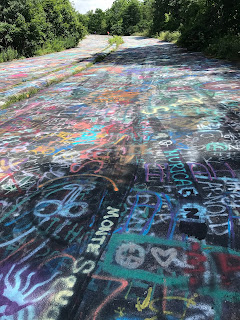 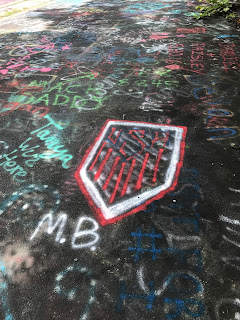 New graffiti overlapped old. I could have taken a million photos.

Of course, as we walked and considered the messages left by visitors who had come by before us, we compared their art to the ancient petroglyphs we observed on the Big Island in Hawaii. Were those petroglyphs viewed like this graffiti? Are they both the work of people trying to make their mark, share their message, create something permanent in a world where things are easily swept aside and forgotten?

The other obvious topic we discussed was "What would you create?" I thought of basics, like a shamrock, or the Hogan family crest. We tossed around the idea of creating an elaborate celtic knot, practicing with spray paint at home to get comfortable with the medium.

Probably, we won't come back and spray paint something, but if we did, I might go the more enigmatic route and leave a single, significant word, like... 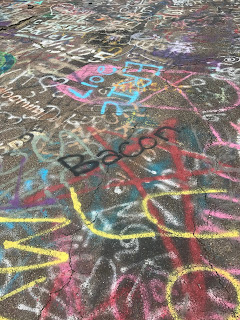 "If you made something excellent, would someone just come by and spray paint over it?" my husband asked. 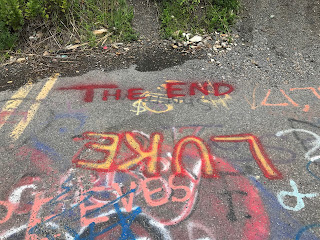