"I Know What You're Thinking, Mom…"

Of course he meant telepathic, but it was an excellent mistake that has led to one of those family stories we tell over and over again. It gets a laugh every time.

But sometimes I wonder. Not that he's psychopathic of course, but if he really does have any idea what people are thinking, how they perceive things, what makes people happy or angry, and the consequences of his jokes and antics.

On the first day of fifth grade, his teacher explained he has an auction system that encourages kids to earn points and spend them on small but interesting gifts. This classroom incentive program excited my middle son. He explained it in lengthy detail as we drove around in the minivan doing a few after school errands.  Then he shared this story as told by his teacher:

Once there was a fifth grade girl who really liked lip gloss. A boy in her class knew she planned to get lip gloss at the next auction. He decided to bid on the lip gloss to force her to spend more tickets. The auction started and the girl bid, and the boy bid, their bids going higher and higher. Finally, the boy bid 200 tickets! The girl said she was done, and the boy ended up spending 200 of his tickets and winning lip gloss he didn't want.


"That's what I'm going to!" crowed my middle. "I'm going to find out what people want and then bid on it and force them to lose their tickets!"

"Um, if you do that, don't you think people will get angry at you?" I said. "You're always telling me you want to have more friends. I'm not sure this is the best way."

[insert the sound of air gushing out of a punctured balloon.]

"But that was the fun of it," he insisted.

"What's fun in tricking people out of tickets?" I persisted. "I'm pretty sure your teacher meant that as a cautionary tale, not a suggestion. Maybe you should work with friends to pool your tickets and win cool stuff."

(I can't take credit for this idea. My youngest did this repeatedly in first grade. He always had plenty of tickets thanks to his goody-goody behavior. He'd generously donate 10 tickets to kids who had lost their tickets for bad behavior and didn't have the necessary 100 tickets to eat at the cafe. All they had to do was pick him as their buddy. Quite the schemer.)

I pondered this conversation for the next few days. Why was it so hard for my bright 10 year old to realize it's so not cool to trick people out of tickets? That's a total jerk move. And he's not a jerk, really. He's pretty serious about fairness and treating people with respect. Couldn't he see it from other people's perspective? Was he going to grow up without friends and live in my basement?

Then I came across this article while doing research on another topic (a very annoying thing I notice in Facebook groups that could make a good satirical/venting essay) and thought, "my middle son needs to read this."

The title is "Psychology Tricks You Can Use to Influence People." It's nothing earth-shattering…to me. But maybe he'd get some ideas.

Back in the minivan, I pulled up the article and let him read it. He was silent for awhile. I wondered if he was reading it or just taking selfies.

Then he cried, "THIS IS AMAZING!"

It was like being given an owner's manual for a complex device. His favorite section was the part on asking for ridiculous things, knowing you won't get them, and then following up with a more reasonable request for the thing you actually wanted. I'm not totally confident he understood the difference between mirroring and the copying game, but I fully expect he will employ a few tactics in the future.

Maybe I shouldn't have let him read it. 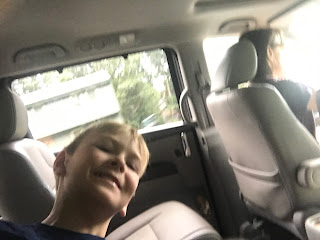 Email ThisBlogThis!Share to TwitterShare to FacebookShare to Pinterest
Labels: Ask My Kids, Being Boys, Middle Kid