We have three boys, and while they are similar in many ways, they are also astonishingly different. Sometimes their differences emerge unexpectedly and I'm surprised and delighted to discover unique perspectives and skills. Other times, I'm caught off guard in the midst of a major miscalculation.

I should have known that the puzzle I picked out as a 10th birthday present for our middle child was not a perfect fit. While the image on the puzzle was just right - a wizard and dragon playing a magical game of chess - the box sat unopened for months. I suggested it as an anti-boredom activity numerous times, but he always turned it down. I should have read the signals.

When I found a dinosaur puzzle, 1000 pieces, I knew right away it would be a great Christmas gift for the oldest. He's always loved puzzles and has even completed 3D spheres and fun shaped crystal puzzles.

The oldest and I plowed right into the dinosaur puzzle two days after Christmas. It was a family effort, and I did stay up a little too late one night even though we were leaving for the airport early the next day. 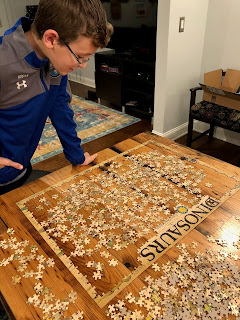 It turns out, I also love the challenge of a good jigsaw puzzle. I think, even though it takes a long time and there are lots of mistakes, I really love the definitive feeling of completion that puzzles guarantee.

When we returned from our travels, the middle son pulled his wizard puzzle off the shelf. He and I started with the systematic process of overturning pieces and building the outer frame. Thanks to a two-hour delay, we had a chance to work together one morning, and I promised I wouldn't proceed without him. The next day, I asked if he wanted to work on it again during the two-hour delay, and he declined. I couldn't resist the call of a puzzle and while he was at school, I made significant process on the wizard. 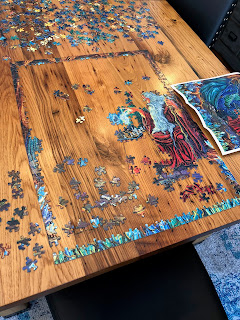 I thought he'd be pleased when he got home, but I was very, very wrong. He was devastated. His reasons for being upset were complicated, but my belief is he was frustrated that I did something he was struggling to do, and he didn't like feeling 'behind.' He didn't really want  to do the puzzle, but he wanted the same connection I had with the oldest on a project. He also hated how hard it was and how frustrated it made him. He was already off-kilter that day and eventually cried a total of four times. The puzzle wasn't really the problem, it was just learning that he didn't like doing the same things his brother, dad, and I enjoyed.

You can't force pieces together that don't fit.

Maybe one of the oldest human behaviors is trying to be like others, because it can be scary to head off on our own and follow our hearts.

Is it better to be happy on our own, or miserable with those we love?

Does this have to be an either or choice?
Posted by Elizabeth Pagel-Hogan at 8:00 AM