If you have followed my blog for anytime at all, you already know I'm not any kind of "genius chef." In fact, I struggle a lot with cooking.
It's probably because I'm easily distracted and a little forgetful.
But I don't like giving up.
And I like to eat.
And I like trying new things!

So when I saw a hefty, powerful cast iron skillet at the store, I thought, "I'll get that and try using it!"

Then when I came home, I realized we already had one…same brand….same size…in the same drawer. Which I had never used.

I used the skillet once. My husband asked if I had seasoned it. I said "What do you mean?"

Both skillets sat in the drawer for awhile, then I decided me and my vegetarian son needed more iron in our diets and I read cooking with cast iron is a great way to add iron. I pulled out the skillet(s) and gave a frittata a try. It went OK.

Then I picked up the Will It Skillet? cookbook at Half Price Books and found a handy guide with easy recipes. I've tackled several, jotted down notes in the cookbook, and enjoyed some tasty results.

Here's a sideway photo of the potatoes I cooked for a spanish version of a frittata. I was surprised all those potatoes fit in the skillet. 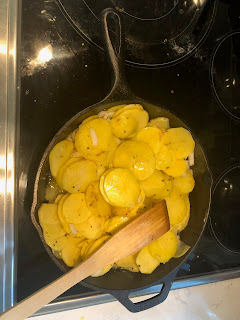 Next I tried making the parmesan tulies, but because I wasn't using store-shredded cheese, I think I didn't have much luck. 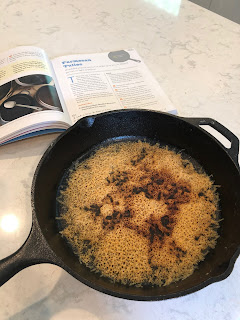 After gaining some confidence with the skillet, I set out my own to make a pepper, sausage and cheese frittata. This was so tasty even my non-egg-loving husband liked this. 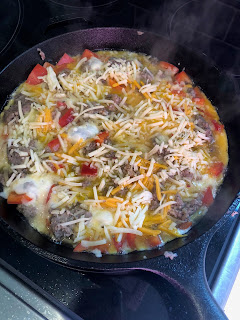 Next, the middle and I tried some skillet mac-n-cheese. Again, the amount of pasta that fit in there was surprising. I need to increase the cheese, milk and salt levels next time for more flavor. 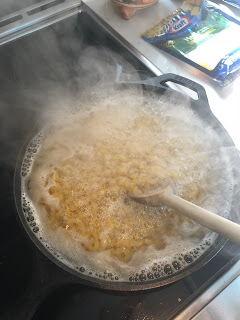 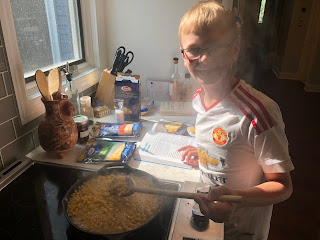 For my husband's birthday, we did our first dessert skillet experiment and made a chocolate chip cookie in the skillet. It was surprisingly easy and really tasty, except for one large note we wrote in the cookbook: 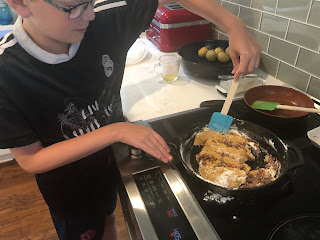 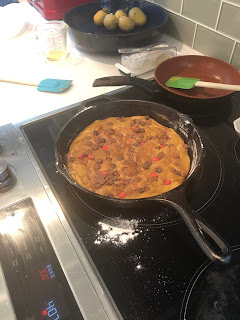 Posted by Elizabeth Pagel-Hogan at 1:08 PM