When my mother-in-law texted us that she'd be coming up to visit, I knew it was time. Time to tackle the trifle.

Sure, I've had my troubles with classic British Isles desserts (see: figgy pudding). But I've also had success (try my Wellington Squares).

But I really felt it was time. And my husband was very supportive. He loves trifle.

So I ordered a trifle bowl using Shipt because sometimes even a trip to Target is too much work.

I gathered the ingredients. Ladyfingers, berries, heavy cream for whipping, chocolate, and Bird's Custard power. I had to order that on Amazon to order Bird's Custard Powder because you've can't find that around here.

(You know what else I've had trouble finding? Chickpea flour. I asked a bunch of grocery stores if they carried it and all said no. Then when I went online and saw it was also sold as garbanzo bean flour. I got pretty mad thinking all those grocery stores might actually have had garbanzo bean flour but didn't know it was also chickpea flour. So I went back and asked and they didn't have either. I wasn't mad anymore.) 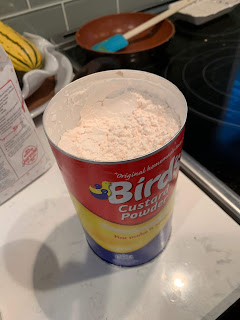 Instructions for preparing it on the hob are on the side of the container, so don't be scared to try it. My MIL and I mixed it up and waited for it to cool. We layered ladyfingers in the trifle bowl, and I realized the ones I had weren't really great for getting to the corners of a round bowl. I might try the traditional madeira cake next time.

We mashed some berries next. My masher wasn't good at cutting the berries, so my MIL did it by hand. This was a mix of blackberries and strawberries. She said frozen berries are fine to use, too. 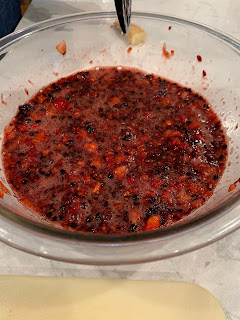 Then I busted out the new stand mixer my mom gave me. She earned it by putting in hard work at the casino. I'm not complaining, because it made great whipped cream! 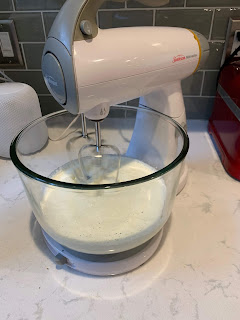 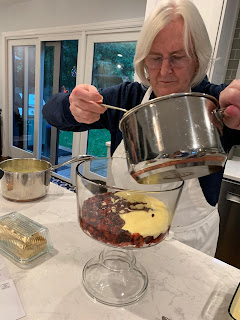 The youngest gave it "visual approval." This means he thought it looked good, and that he may try it. 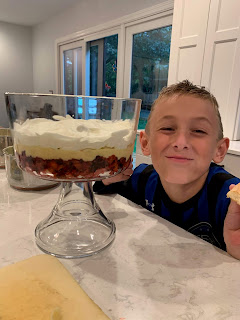 We popped it into the fridge then went to get dinner at Ki Ramen (try the crispy pig's ears) and cheer for the Riverhounds in their first playoff game at home. It was rainy, sleety, and cold, but they played hard. Sadly they lost in penalty kicks, but it was still really fun.

We came home and grated chocolate on the trifle and then dug in. 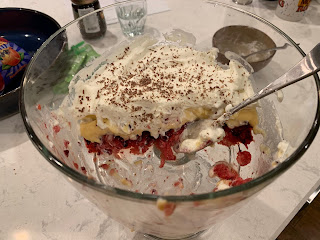 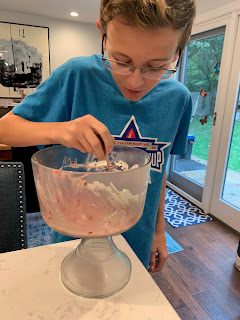 It's even good right out of the bowl for breakfast.

Posted by Elizabeth Pagel-Hogan at 2:55 PM