I spent a lot of time at my grandparents' house while I was growing up. They were my mom's parents, Marjorie Rose Walterhoefer Shaffer and Eugene Shaffer Sr. My grandfather, whom I called Gonky, never went to high school or college, but he was a steady reader and even a writer. He had an office in his basement and had two typewriters. I loved typing on those typewriters. He wrote stories for my children and I saved them. He also wrote a short non-fiction essay and I'm sharing that here today. 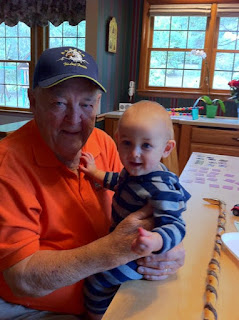 My fascination with hats began with the Boy Scout Campaign Hat. The leaders and boys both wore the same hat and that made me feel grown up. I was so proud of that hat.

At that time I did not realize the role hats would play in my life. At different times the hat would give me a different identities.

In my seventeenth year World War 2 was going full blast and I couldn’t wait to join up. I traded my Boy Scout hat for the round white Navy hat. I wore that hat cocked to the side and with a very salty air.

Returning to civilian life hats continued to give me identity. Baseball caps became the hat of the times. Caps with sport team logos identified the city or state you were from. The Baltimore Orioles were my favorite.

When I retired I got involved with the DE Sailors Association and I was proud to wear a hat that identified me as a former crew member of the USS Bostwick DE 103. I am sure people noticed but did not comment. It wasn’t until my wife bought me a World War 11 Veterans hat when we visited the USS Yorktown that things started happening.

I took my wife to the doctor’s office and parked on the parking lot in back of the building. When we came out I noticed a paper stuck under my windshield wiper. I thought right away someone had hit my car and left a note. When I read the note, I was very surprised. The note read, “ Dear Sir, I saw your hat as you passed my car. I want to thank you for my freedom.” It was signed  “A grateful citizen.”

Others have gone out of their way to say the same thing. Once while walking on the beach at Bethany Beach, Delaware, a young man came running out of the water when he saw my hat. He was a Lt. Commander in the U.S. Navy and said he was proud of the job the service men did for our country in WW2.

Sometimes the thanks I receive are simpler. While pumping gas in my car a very young man in his twenties came over to shake my hand and thank me. More recently, my wife and I were at a restaurant. A lady came over to the table and asked if I was the man with the WW2 Veteran hat. I said I was and she said, “ I really admire you vets and thank you for saving our way of life.” I thanked her for taking the time to say so.

My hats have said a lot over the years, but none say it any better then my last one. I am grateful people remember. God Bless.
Posted by Elizabeth Pagel-Hogan at 12:52 PM