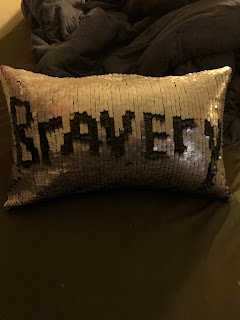 Do you have a word for the year?

My oldest son picked "bravery" as his word for the year and I love it. It's kind of a family theme this year, I think.

Bravery encompasses all kinds of behaviors that I respect and admire and appreciate.

Bravery can be pushing yourself to work hard at a physical activity.
It can be submitting to a new publication.
It can be trying new foods.

My middle son exhibited some bravery over the holidays. He received a jigsaw puzzle as a gift and was uncertain about tackling it. He's struggled with puzzles before. They can be frustrating and difficult.


I offered to trade him for it, but he decided to do it. I was so proud of his bravery. 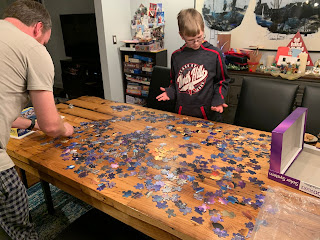 He also didn't want help. I was nervous about that, because sometimes he sets really lofty goals for himself, and doing a 500 piece puzzle all on your own is daunting. He eventually allowed us to sort pieces for him but not place any.

He tackled the puzzle his own way, too, much differently than I usually do puzzles. I stepped back and let him try it. 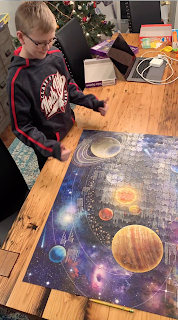 I didn't need to worry. He did it.

And his feeling of accomplishment was as big as the solar system.

Posted by Elizabeth Pagel-Hogan at 1:11 PM