A few years back, my middle son was watching the Olympics on television.

"What event is this?" I asked when I came into the room.

"I don't know what it's called, but they are hitting each other with electric sticks," he said. "And I like it."

You've probably already guessed he was watching fencing. I admit I don't know much about the sport, but I do love pretending I do by shouting "EN GARDE!" and whipping my imaginary foil at my opponent.

He wasn't begging us to try the sport, but he was interested. And he has a strong martial arts background which translates well to sports like this. But there wasn't a place close to us that taught fencing and our schedules are pretty busy.

We wanted to give him the chance to at least learn about the sport. My husband signed up for an alert from a local fencing club and we got lucky. Really lucky. They had an intro to fencing course only a five minute drive from our house!

It's really nice to only drive five minutes for a kid's activity. Soccer parents, I know you hear me.

So for the past 6 weeks he's been learning a huge list of parry positions, new phrases, trying out pistol grip and comparing it to French grip, putting on equipment, and learning how to win bouts. 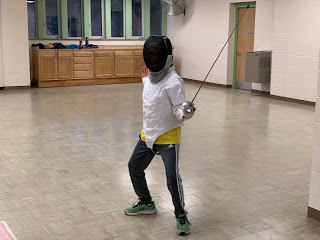 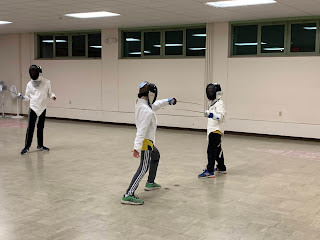