I've done five races this year - 5! I know I set the goal at six back in January, but I didn't know if I could actually fit races into my schedule. I'm pretty excited that not only am I about to meet this goal, four out of the five races I've done are new to me. It's good to push myself out of my comfort zone, while keeping some familiarity.

By July, I thought I'd only done one. I had forgotten about the Frigid Five I did in January. That was a new race. Cherry Blossom was two, then nothing for months. Then in July I panicked and did two almost back to back, the Yinzer 5K and North Boros YMCA 5K. Both of those were brand new to me. Even though I did new races, I was familiar with the courses.

Then in August, I did the Passavant 8K, which was a new distance AND a new race AND on a Friday evening (  love evening races), but again on a familiar course.

So now, do I do my sixth race at a new to me event? Or an old favorite like the Great Race? It's exciting to have this choice and to know I can really achieve this goal! 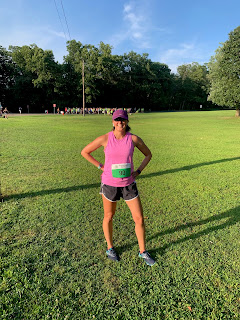 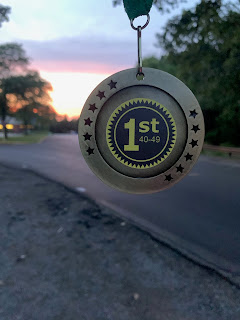 Posted by Elizabeth Pagel-Hogan at 10:48 AM