Cause and Effect in Nature

At first there was only one. 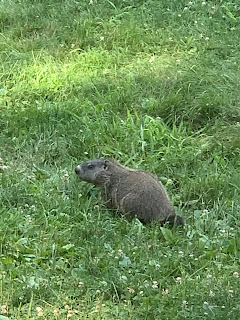 Just one groundhog living under our deck.

Then on my wedding anniversary there were two. It was romantic.
Then a third moved in very soon, and I'm not quite sure where it fit in.

They aren't aggressive or harmful, really. In fact they have entertained us somewhat.

But they can shift a lot of dirt. We read they can move as much as 700 lbs.

We are worried they could undermine the ground under the deck.

I called a pest control company, and they said I could trap them (they wouldn't), or shoot them (I wouldn't).

I did some reading online and learned that basically none of the chemical repellants work. So I looked for a natural solution.

And I was delighted to learn that attracting a hawk would encourage the hogs to move to a new home.

But how do you attract a hawk?

By attracting their prey. Songbirds.

So I hung lots of bird feeders, including regular house-shaped ones, and some unique finch socks.

The squirrels loved the one finch sock I hung in a bush at the back of the house. But they didn't both the one I hung in a smoke bush on the edge of our yard.

I didn't see any finches there for a long time. Then we saw one. 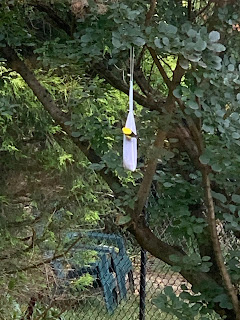 Then we saw lots. We saw them every day. So I hung two more finch socks in that same bush.

But the finches only went for the first one, the one hanging over the grass. Gradually, they have eaten almost all of the seeds out of that one and left the other two alone. 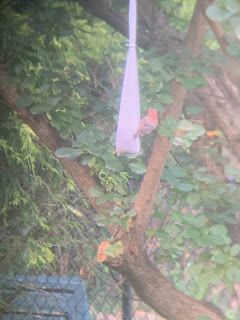 The first finch sock, the one in the photo above, is almost empty! I pointed this out to my family.

"Maybe they like the shade more,'' suggested my oldest.

I was amazed. I had never thought of bird feeders in the sun or the shade being more appealing. But his casual comment had me looking at the bird feeders in my yard - and the birds I see in our neighborhood - in a whole new light. And shadow.

I still don't know why the squirrels won't bother the socks hanging in the smoke bush. They certainly loved it in the other bush.

Thinking of the impact of sun and shade, of attracting prey to draw in predators, of attracting a predator to repel a minor pest, of how squirrels love a feeder in one bush but not another, are all elements of scientific thinking. This thinking comes from observation and questioning. It helps us observe and experience and understand the world around us.

Perhaps the groundhog isn't only one shifting things around here.

Posted by Elizabeth Pagel-Hogan at 11:50 AM