The youngest played his first season of basketball this winter. We had an incredible time watching him gain skills and bond with his teammates. He hustled all over the court. He made baskets, and he was really good at grabbing rebounds and defending. He learned new drills, plays, and sports phrases (like "box out").

I knew he was having fun because he asked for basketball shoes! They only ask to invest in footwear when they like the sport.

His team was undefeated all season. They even made it to the finals of the tournament!

It was heartbreaking. They lost by one basket. Their coach reminded them that getting there was an achievement. But they couldn't hide their sadness. I thought it was really special to see them comforting each other. 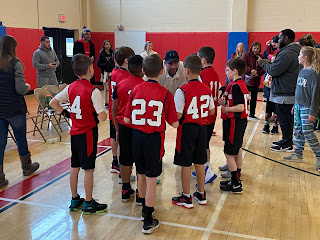 And later that day, after he had dried his tears, he was out in the driveway shooting hoops.
Posted by Elizabeth Pagel-Hogan at 3:13 PM