Two days ago a bird egg fell out of the sky. No joke! We were playing in the backyard and a bird egg fell on to the grass. It cracked open, of course, and I had to clean up a small, doomed bird embryo.

I'm an avid amateur birder, but I don't know a lot about eggs or nests.

On a walk in my neighborhood I spotted this bird's nest with one bright blue egg. I'm fairly certain it's a robin's egg. But robins usually lay three or four eggs. Having just this one left makes me think something went wrong. 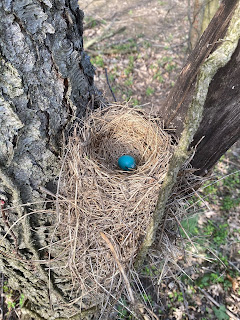 I'm an amateur birder and I'm constantly learning new things about birds, and about birders. People have very strong opinions about birds. Some people hate house sparrows because they are not native. Other people hate hawks who eat smaller birds.

I try not to hate any kind of bird, and I don't mind if a hawk eats another bird. Or a squirrel. But I also probably shouldn't mind if a great horned owl grabbed a red-tailed for dinner.

I have learned a lot about how some birds treat other birds pretty "bad." For instance, cow birds lay their eggs in other birds' nests and expect those birds to raise their young. Of course some birds eat other birds' eggs. It's just how things are in nature, I think.

I was excited earlier this year when I thought I saw chickadees making a nest in one of the bird houses I hung in the backyard.

Then a few weeks later, I saw my first house wren flying in and out of what I thought was the chickadees' bird house. I guess I was mistaken, I thought. Maybe the chickadees were not building a nest in there.

I belong to several birding groups on Facebook. On Sunday, I read a post from a woman who was very upset that house wrens again showed up and took over chickadees' nests. The wrens even destroyed the eggs of the chickadees!

I was surprised (again) and realized this same thing probably happened in my backyard without me knowing. I don't know a lot about bird nesting practices. I can't really get a good look into the bird houses. I won't ever know for sure. But it seems pretty likely.

Yet another example of birds treating each other badly.

This woman wants to discourage house wrens from nesting in her yard anymore. She even goes around dumping house wren nests from other boxes that she wants chickadees to use! I've never considered sticking my hands in the complex interactions of nature like that. I'm not sure what I think about it.

I feed birds, I watch birds. I love learning about their complex behaviors. I offer some nest boxes, but I don't go around destroying nests of some birds. That seems so...controlling, even for me!


- Update on bird nests:
I  saw a blue jay working on a nest, adding some plastic debris. Unfortunately while the jay worked, it dislodged the nest from the tree! I watched it fall to the brush in our backyard. The next day, I lifted it up with a stick and put it in the crook of a tree. I don't know if the jay will reclaim it or not. But I'll watch.

I saw a robin fly into a dense coniferous bush in our front yard. I had to drag a heavy patio chair over to the bush to get a photo down into the nest. It's very dark in the nest, but I don't see any eggs just yet. I didn't look too close. I didn't want to disturb the birds if I could help it.


Posted by Elizabeth Pagel-Hogan at 12:51 PM